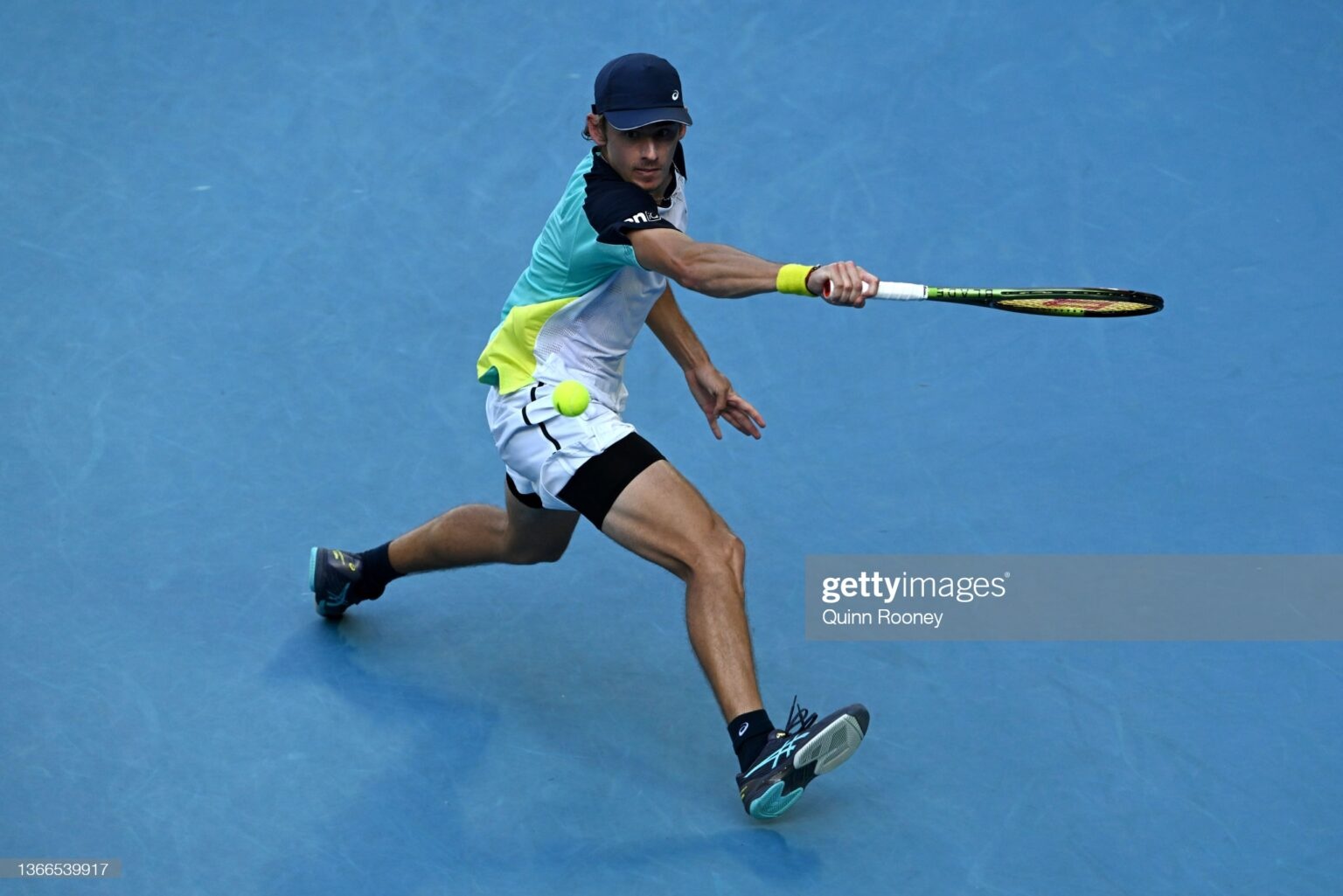 Day Eight of the Australian Open was Pride Day and well celebrated. The action on the court was just as thrilling as the days before.

Day Eight of the Australian Open was Pride Day and well celebrated. The action on the court was just as thrilling as the days before.

On Day Eight, the Australian Open celebrated its first AO Pride Day in conjunction with Midsummer Festival, shining a spotlight on the LGBTQ+ players and fans.

Ash Barty became the sole Australian in the singles quarter finals, while doubles fared better with Aussie quarter finalists in the men's, women's and mixed doubles.

It was neck and neck in the first set, with neither player giving up a break. Sinner started gaining momentum in the tiebreak as he charged ahead with a 7-3 win, banking on powerful hits and unforced errors by de Minaur.

In the second set, De Minaur had an opportunity to break in the first game, but was unable to deliver at the crucial moment, ultimately giving the set to Sinner. Sinner subsequently claimed a break early in the second game of the third set, and maintained that lead to win the set.

The unforced errors continued to plague de Minaur, allowing Sinner to claim two breaks early on in the third set. It is not until the sixth game that de Minaur breaks back, but he is unable to swing it further back around in his favour.

Sinner will face off against fourth seed Stefanos Tsitsipas on Wednesday; a tall order for the 20-year-old for his first Australian Open quarter final.

Dynamic duo Max Purcell and Matthew Ebden held their own to win against thirteenth seeds Raven Klaasen and Ben McLachlan.

A double fault by McLachlan and an ace and service winner from Ebden and Purcell in the tiebreaker set them up for success in the first set. The Australians kept that momentum going into the second set, claiming a break in the second game and holding onto that lead to win in straight sets.

Wild Cards Dane Sweeny and Li Tu capped off their Open journey, losing to second seeds Rajeev Ram and Joe Salisbury in straight sets. Ram and Salisbury go into the quarter finals as the highest seeded team, having dropped no sets thus far.

In the women's doubles, Storm Sanders and American doubles partner Caroline Dolehide progressed to the quarter finals after a win against Ukrainian pair Marta Kostyuk and Dayana Yastremska.

Sam Stosur's Australian Open journey is officially complete, as she and Matthew Ebden lost to fellow Australians Jaimee Fourlis and Jason Kubler. Fourlis and Kubler held their own in the tiebreak of the third set, using a couple of well-timed aces to close the gap throughout the set.

Second seeds John Peers and his Chinese partner Shuai Zhang are also through to the quarter finals after winning in straight sets against Bernarda Pera and Wesley Koolhof.

Around Melbourne Park – seeds upset in the women, while top seeds roared ahead in the men

World number 115, Estonian Kaia Kanepi has provided one of the biggest upsets of this year’s Australian Open, beating world number two, Belarusian Aryna Sabalenka in a come-from-behind victory to claim a maiden quarter-final berth at the Australian Open.

It was a back-and-forth contest to begin the first set, with neither Kanepi or Sabalenka giving up a break through the first 11 games, until the former did so in the 12thgame through a series of unforced errors by her opponent.

The Estonian made light work of the second set to draw the match back to a set-apiece, winning the first four games, including breaking her opponent twice. Despite Sabalenka claiming two of the next three games, Kanepi served for the set, and while there was some shaky moments, she held her nerve as her opponent errored on the final set point.

Kanepi rode the wave of momentum throughout the start of the decisive third set, winning the first two games before Sabalenka clawed back with crucial seventh and eighth game victories where the score went to deuce on three and four occasions, respectively.

With the final game tied at four-all, Kanepi won the following game and was serving for the match, however, despite being 40-0 up, Kanepi came undone by a strong return game from Sabalenka, with the Belarusian eventually claiming the game after taking it to deuce twice.

Each player won their next respective service games with ease, which ensured a tiebreak would determine the result. During the tiebreak, it remained close, however Sabalenka did have match point but to Kanepi’s credit, she didn’t falter as she responded to the threat and won the final three points of the tiebreak, which earned her the historic victory.

The 36-year-old Kanepi has never progressed past the quarter-final stage of a Grand Slam in her 21-year professional career but will look to make it to the semi-finals when she meets seventh seed Iga Świątek on Wednesday.

Former world number one and 2018 Australian Open finalist Romania’s Simona Halep has bowed out of this year’s tournament after world number 61, France’s Alizé Cornet overcame her opponent in three sets.

Halep was broken in a crucial 10thgame of the first set to give Cornet a leg-up on the contest when the former sent a pass long behind the baseline. Halep got a set back though, breaking her opponent in the first, fifth, seventh and ninth games of the set, the latter of which had the scores tied at one set each.

Neither player let up through the first five games of the third and final set before Cornet won three games in a row and despite Halep finding one back, Cornet served for the match, and got there with a Halep error.

Poland’s Iga Świątek has produced an Australian Open-best after prevailing over Romania’s Sorana Cirstea in a three-set battle. The 2020 French Open winner, Świątek lost the first set but had little trouble in finding the results over the next two sets.

The number seven seed, Świątek was a constant threat with the first serves and found form at the net in a dominant return game against Cirstea which paved the way for the victory.

American Danielle Collins also won out to reach the quarter-finals in the women’s singles, dispatching Belgium’s Elise Mertens in a come-from-behind, three-set victory.

With the score reading five games to four to Mertens in the first set, the Belgian fought off a break point when she double faulted to see Collins with the advantage, instead fighting back and taking the first set.

After a grueling five-set encounter in his third round matchup, the USA’s Taylor Fritz was again involved in a match that went the maximum distance in his fourth round encounter with Greece’s Stefanos Tsitsipas, although this one didn’t go the way of the American.

Neither Fritz, nor Tsitsipas let up in the first six games of the contest, until the former broke the Tsitsipas serve in the seventh game and keep that ledger on his way to serve to a first set win.

In a similar story, the Greek broke Fritz’s serve in the 10thgame of the set, to take the second set as both players had held their own serves to that point in the set.

Fritz claimed a crucial break in the third set and was 5-3 up, receiving for the third set but although being up a set point three times through an advantage, Tsitsipas won the ninth game. However, it wouldn’t eventuate into anything as Fritz held his own and won the third set with four unanswered points.

In the fourth set, Tsitsipas’ serving game was strong but he couldn’t find the break until the eighth game that got to deuce. The Greek saved break points in the ninth game but found strength in his forehand to find him the winning shots he needed to take the match into the fifth set.

Tsitsipas won a crucial ninth game of the final set, breaking Fritz who committed an error, and, serving for the game, the Greek made no mistake, forcing his opponent to commit a few costly mistakes which sewed up the win for him and enter the final eight.

Although it seemed a cruisy first set win to the Russian Danil Medvedev, world number 70, American Maxime Cressy wasn’t going to go down without a fight.

A second set tiebreak was won by Medvedev, however Cressy got his revenge in a third set that also needed to be decided by a tiebreak. In the fourth set, Medvedev won a crucial 11thgame break which helped set up a situation where he served for the match, winning all four points without Cilic even getting on the scoreboard, in the final game of the set, and the match.

The number nine seed, Canadian Felix Auger-Aliassime needed four sets to overcome 27thseed, Croatian Marin Cilic, with the second and fourth sets needing to be decided via a tiebreak.

After Cilic won the first set with ease, Auger-Aliassime proved his strength to move into the quarter-finals – his best-ever Australian Open result – with a hard-fought battle. Even if he couldn’t convert many break points, the Canadian forced his opponent into almost double the number of errors which went a long way to deciding the result.