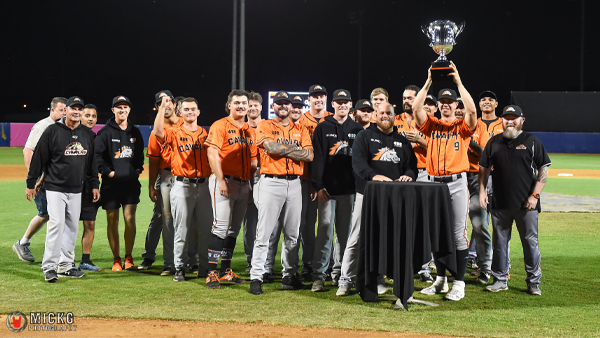 Across the past weekend, the Canberra Cavalry travelled to Blacktown International Sportspark to face the Sydney Blue Sox, and in doing so, won the Kent-Oxspring Cup.

Across the past weekend, the Canberra Cavalry travelled to Blacktown International Sportspark to face the Sydney Blue Sox, and in doing so, won the Kent-Oxspring Cup.

Amongst the 2021/22 Australian Baseball League season’s cancellation, teams from across the country have organised their own exhibition games. This past weekend, the Canberra Cavalry travelled interstate to Blacktown to face the Sydney Blue Sox, and in doing so, won the Kent-Oxspring Cup.

The Blue Sox and Cavalry met at Blacktown in the first game of the reinstated Australian Baseball League in 2010, and have had a huge rivalry since then, contesting for the Hume Highway Cup.

However, as of this year, the trophy has a new name - the Kent-Oxspring Cup -, commemorating two players who helped in the re-launching of the modern ABL, Steven Kent and Chris Oxspring. Both players were the starting pitchers for the Cavalry and Blue Sox respectively, in the first game of the 2010/11 season.

Kent, a stalwart of the Cavalry across the past 11 years has played a total of 122 regular ABL-season games for the team, as well as holding a club-record 382 strikeouts. His baseball journey also saw him play within the Atlanta Braves organisation, and in multiple Team Australia campaigns.

Oxspring was the 21st Australian to play in the MLB when he made his debut for the San Diego Padres in 2005 and is one of three Australians to play in each of the MLB, the NPB (Japan) and the KBO (South Korea). Along the way, he was a regular Team Australia representative which included two World Baseball Classic campaigns, as well as being a part of the the silver medal-winning side at the 2004 Olympic Games in Athens.

The KO Cup series began with a three-game series (though the second game was cancelled due to weather) at MIT Ballpark in Canberra across the final weekend of January, with the Canberra Cavalry up 2-0 against the Sydney Blue Sox heading into this past weekend's two-game series.

It was an exciting first two innings especially in this Game 3 of the KO Cup series, with 10 runs scored overall across that time, before a more tidy defensive effort from both teams throughout the remaining time of the contest.

The Canberra Cavalry was up to bat first in the game, plating four runs at the top of the first innings. Kevin Jordan Jr got a lead-off base hit with a hit into centrefield to start the game, but the Cavalry were quickly down two when Jordan Jr and Jordan Young were both forced out at second on a fielder's choice.

However, this didn't stop the Cavalry bats still going, as Boss Moanaroa found some outfield grass and saw Robbie Perkins make his way to third. Kyle Perkins earned a base on balls to load the bases.

The first run of the game was scored by Robbie Perkins who came home on a Todd McDonald hit into centrefield. A bases-clearing double from Karl Hoschke which saw the ball travel to the right field fence allowed for Moanaroa, Kyle Perkins and McDonald all to score on the hit.

Sydney Blue Sox lead-off batter Solomon Maguire made sure to respond well to the opposition's top half from the very start with a triple into centrefield. And, just like their opponents, the Blue Sox went on a two-out rally after back-to-back swinging strikeouts from Max Brennen and Zac Shepherd.

Solomon Maguire of the Sydney Blue Sox slides into third base for a triple. (Photo: MickG Photography)

Maguire scored the Blue Sox's first run of the evening when Michael Campbell singled into left field, before the bases were loaded with a Mitch Austin base on balls. Will Fullerton hit a two-RBI single into right field which scored Alex Howe and Campbell, but Austin was caught in a run-down play between second and third and subsequently tagged out for the third out.

Logan Kingham got the Cavalry another lead-off single to start the second innings, with Blue Sox short stop Brennen making a diving effort to stop the ball from going through the infield, although the through was unable to get to first in time.

Jordan Jr grounded into a double play, Brennan making the unassisted out at second, and then throwing to first in time. However, another flurry of runs came when the side was down two, with Robbie Perkins blasting a two-run home run over the fence in left field, scoring Young also who singled the at-bat prior. Despite Moanaroa hitting a single into centrefield, the dig was over when Kyle Perkins flew out to right field, caught by Campbell in foul territory.

The Blue Sox went out to bat at the bottom of the second and found back-to-back singles to James McCallum and Tristan Watts. Maguire was tagged out on his way to third, but it advanced the runners and bases were loaded when Howe was hit by a Frank Gailey pitch.

A double-play opportunity couldn't be completed by the Cavalry on a Brennen hit, just getting Howe at second, while McCallum scored but that would be all for the second innings as Shepherd flew out to left field.

Sydney made the first pitching change of the game, bringing in Coen Wynne for Chris Oxspring and while he gave up a lead-off single to McDonald, the next three batters were sat down in succession. Sydney also found a runner on via an error in the bottom half, but it didn't eventuate for the team.

Each team found a run in the fourth inning; Canberra scoring a run through Jordan Jr via a sacrifice fly to centrefield by Robbie Perkins, and Sydney's Watts scoring on a Shepherd hit into centrefield.

The Blue Sox made another pitching change ahead of the fifth inning with Todd Grattan making his way to the mound, and it was a three-up, three-down inning for the Cavalary. The first two hitters got aboard for the Blue Sox in the bottom half, but Gailey turned the tide, involved in all three of the outs; a pop-up diving catch, a swinging strikeout, and making his way to first to receive a groundout ball.

Canberra made it a three-run game when Jordan Jr - who had a lead-off single - scored on a Young double into centrefield to start the sixth inning however, the next three batters up were all sent back to the dugout. Gailey was again involved in all three of Sydney's outs in the bottom half, including two strikeouts.

It turned into mostly a pitching duel from that point on, with Sydney taking the game on more so, with its baserunners wanting to move quickly but getting caught. Eventually, Canberra were strong towards the end on defence, a strikeout finishing the contest.

For the home team, Sydney started with Chris Oxspring on the mound, who lasted two innings, giving up six runs on seven hits with one strikeout. The Blue Sox used five pitchers all up with Coe Wynne, Todd Grattan, Kyle Cross and Dylan Clarke all helping out.

Solomon Maguire, Michael Campbell, Will Fullerton and James McCallum each had two hits for the Blue Sox, with Fullerton also collecting two RBIs.

For the Cavalry, they were led with the bat by Kevin Jordan Jr who totalled three hits, meanwhile Jordan Young, Boss Moanaroa and Todd McDonald each had two hits. Robbie Perkins and Karl Hoschke each had three RBIs.

It was almost a complete shutout game for the Sydney Blue Sox as the team celebrated a win in its final hitout of the summer, getting on the board in the first inning and never looking back.

Sydney's starting pitcher Matthew Rae ensured it was a three-up, three-down dig to start proceedings, before the home team's got the first run on the board in the bottom half, a two-out single to Michael Campbell, who scored via a Harry Fullerton triple into centrefield.

Despite the visitors having two runners reach base, the Sydney defence got out of the jam. The home team also found a runner on base in a scoring position in their second innings, but the three outs were recorded around the hitter.

The Cavalry looked to drive in a run at the top of the third innings, with two out and a Robbie Perkins hit going into centrefield, but the throw from Campbell was long and accurate, as Kevin Jordan Jr couldn't slide home safely in time, coming from second.

The Blue Sox made it a four-run lead when Trent D'Antonio, Max Brennen, and Campbell all reached base to have the bases loaded, before a bases-clearing double into centrefield from Fullerton - including a close play with the third run, Campbell, sliding into home - saw the score increase.

Michael Campbell of the Sydney Blue Sox sliding in to score against the Canberra Cavalry at Blacktown International Sportspark, Sydney.

The next at-bat, Mitch Austin grounded a ball to short stop, though it was errant throw from Logan Kingham, which allowed Fullerton to score Sydney's fourth run of the inning and take a five-run lead. With a double given up to Tristan Watts, it forced Canberra to change pitchers, turning to Justin Erasmus. He only needed a few pitches to get out of the innings with the final two outs.

The Blue Sox made their first pitching change in the third inning, bringing in Connor MacDonald, who had two strikeouts in his first inning pitched, despite also giving up a hit to Todd McDonald.

Sydney continued its dominance with the bats, loading the bases once again in the bottom of the fourth inning with back-to-back singles to D'Antonio and Brennen, those two batters scoring on hits from Austin and McCallum.

Even though the Cavalry had two runners in scoring positions off the back of an error from Sydney's short stop, Fullerton, they still couldn't find their first runs in the fifth innings.

Lachlan Brook entered the game to take a spot on the mound for the Blue Sox at the top of the sixth inning, the Cavalry seeing a three-up, three-down dig. The Blue Sox scored one more run in the bottom with Fullerton scoring from third on a Watts groundout.

The Cavalry again found runners on base but couldn't advance them, which happened to the Blue Sox at the bottom too, even after a pitching change from the visitors, bringing in Jason Lott.

The Cavalry completed a shutout of the Blue Sox for the remainder of the with the use of various pitchers and scored their first run at the top of the ninth when, after three consecutive walks from Alex Brook saw the bases loaded, a single from Jordan Jr scored Jack Middleton. The next two batters went out as the ballgame came to an end.

Canberra began with Rhys Niit on the mound for 2.1 innings, as he gave up five runs on seven hits with one strikeout. From there, Justin Erasmus, Dean Aldridge and Jason Lott provided some support.

With the bats, the Blue Sox were lead by Harry Fullerton who had three hits (two doubles and a triple), while Trent D'Antonio, Max Brennen and Michael Campbell had two hits each. Fullerton also tallied four RBIs.

For the Cavalry, Kevin Jordan Jr totalled two of his side's six hits in total as the only multiple-hit player, as well as bringing in the team's only run of the ballgame.