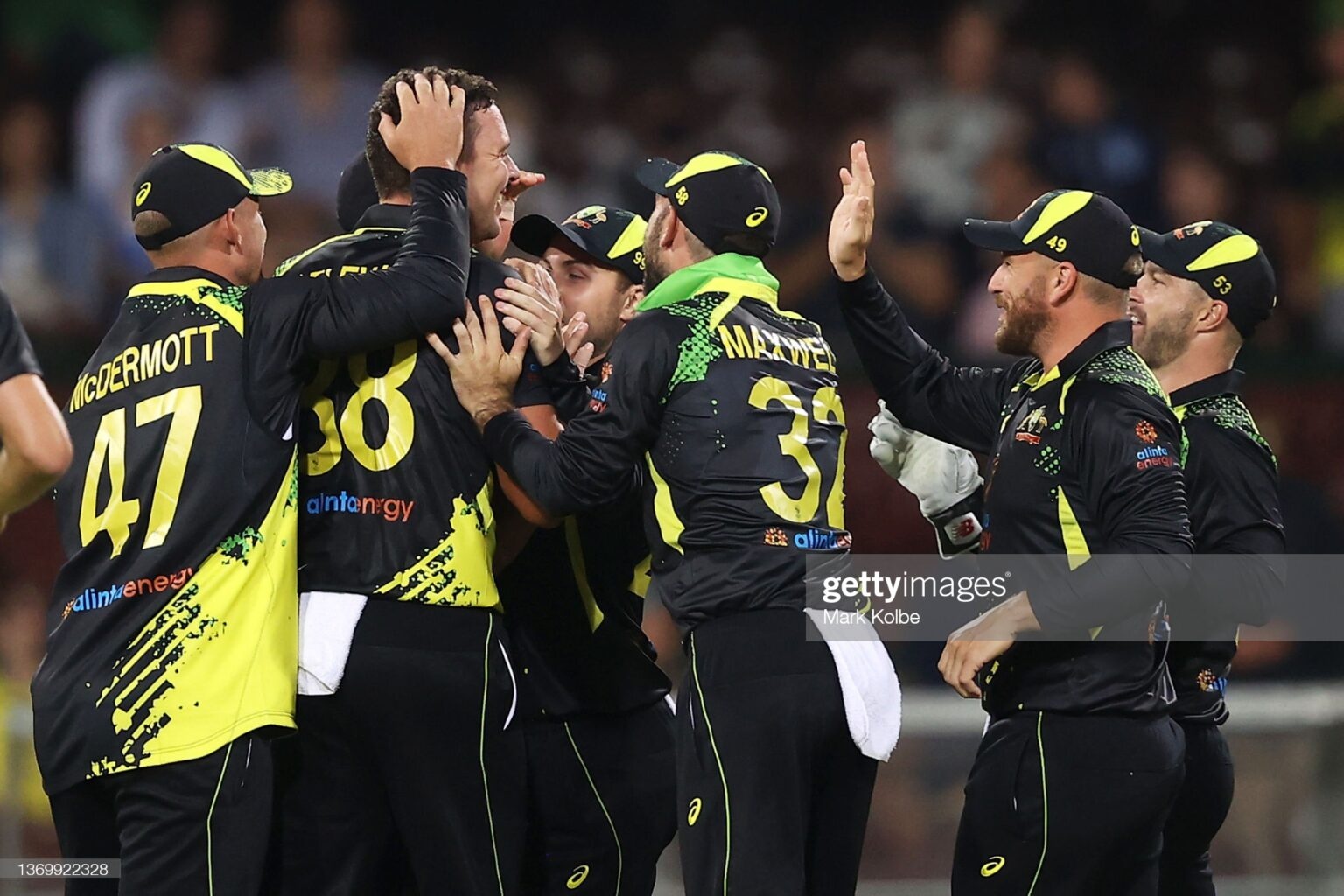 Australia have held on for victory at the SCG in a super over after Sri Lanka fought back hitting 18 from the final over of the match.

Australia have held on for victory at the SCG in a super over after Sri Lanka fought back hitting 18 from the final over of the match.

Australia held on for a victory in the second T20 international at the SCG despite Sri Lanka coming at them hard in the final overs of the match. Pathum Nissanka almost saw the tourist’s home with an excellent 73 from 53 balls, but it wasn’t to be with Australia winning the super over after Sri Lanka hit 18 in their final over of the innings.

For the second match in a row Sri Lanka won the toss but today they chose to bowl first. It was the obvious choice with Sri Lanka’s bowling being their strength and Sri Lanka having won five matches against Australia when bowling first compared to three when batting first.

Sri Lanka needed a good start with the ball, but it wasn’t to be as both Aussie openers got off to a flyer. Ben McDermott (18) struck three boundaries before he was out inside the powerplay, which Australia finish at 1/52.

Aaron Finch (25) combined with young gun Josh Inglis (48) for a couple of overs before Finch ran past a wrong’un giving the world number one bowler Wanindu Hasaranga (2/33) his first wicket of the match. That was before Glenn Maxwell (15) came in looking good but was ultimately undone by a controversial DRS decision where the ball was deemed to be brushing the glove. Maxwell was unsure as were many of the Aussie supporters.

There were just over eight overs to go when Steve Smith (14) came to the wicket, but once again he didn’t deliver in the T20 format. Batting through the death he only managed 14 from 15 balls. The question needs to be asked if he fits in this side, especially when young up and comer Tim David was just sold in the IPL for over 1.5 million dollars.

Smith was out and then Marcus Stonis (19) went the very next ball off the bowling of Dushmantha Chameera (2-30), it was up to Pat Cummins (6) to face the hattrick ball which he did with ease going inside out over cover for a couple.

The big-hitting finisher Matthew Wade only faced four balls but made the most of his hitting 13. Wade is clearly wasted at seven, perhaps it’s time to move Smith out and bring Ashton Agar in moving Wade up to number six.

To be clear it wasn’t a bad innings by the Aussies but if they are to hold onto the T20 World Cup trophy this November they need to find that extra level. In Australia on flat pitches do they really need Steve Smith as an anchor, or would they be better with David or Agar in the middle order?

Australia finished 6/164 it was always going to be a difficult chase for Sri Lanka who didn’t seem to have a lot of batting power, but that wasn’t the end of the story.

165 was always going to be a big ask for Sri Lanka and it wasn’t made any easier with Danushka Gunathilaka (0) getting out in the first over to the bowling of Josh Hazlewood (3/22). Two more wickets fell in the powerplay with Avishka Fernando (5) hearing the drums before Charith Asalanka was bowled by Pat Cummins (1/30) for a duck, a rebuild was very much needed.

Dinesh Chandimal (19) got the promotion to number five, and it paid off, to a degree at least. He put on a partnership of 42 with Nissanka to finally give Sri Lanka some stability. Unfortunately, it was too stable with the run rate pushing 10 when Chandimal was out for 19 from 22, it was simply too slow by the wicket-keeper batter.

Enter Dasun Shanaka (34), he only averaged 20 in T20i cricket before this innings, but you couldn’t tell by the brutal hitting he put together alongside Nissanka. He smashed 34 from 19, putting on 48 for the parentship to keep Sri Lanka in the game. Unfortunately, he was run out with a Steve Smith direct hit from the boundary.

50 runs were needed from the last four overs, and then 46 from the final three as Chamika Karunaratne (0) also got out meaning Sri Lanka only had four runs in hand to do their work.

Nissanka had batted relatively slowly up to that point being only 52 from 46 balls, but then he accelerated and accelerated big time. He was like an F1 car going bang, bang, bang taking hitting sixes along with Hasaranga who managed to find the rope a couple of times off Pat Cummins.

With two overs to go, they needed 29 and it looked like the Aussies would have it in the bag, that was before Maxwell dropped one over the rope, his second drop of the night. It meant it would be 19 from the final over with Marcus Stoinis (1-30) to bowl the final over.

Stoinis who hadn’t bowled the final over in a T20I in over four years was given all the responsibility and pressure, and that pressure definitely got to him. It was a wide first ball before a boundary went over mid-off. It was then a couple more before Nissanka hit out to deep backward square with Cummins taking the catch.

Theekshana (6) came to the crease and went bang over mid-wicket for six, unfortunately in all the carnage, Steve Smith appears to have hurt himself trying to stop that six. Five was needed from the final ball, and Stoinis didn’t deliver going with the low full toss. It was hit hard straight down the ground four meaning it was time for aSUPER OVER!

Aaron Finch gave Josh Hazlewood the responsibility of bowling the super over and it paid off in spades for the Aussie captain. It was two dot balls to start before a run-out came from the third ball with Sri Lanka trying to get through for a couple of leg byes. The Sri Lankans couldn’t manage any boundaries scoring only five.

It was Glenn Maxwell and Marcus Stoinis to go out for the Aussies while Hasaranga would bowl for Sri Lanka. The first ball was a full toss that went down the ground for a single before Stoinis smashed one wide of the mid-off fielder crashing into the rope. Another single was hit down the ground to make sure Australia took the series 2-0 taking a clean sweep of the matches at the SCG.

Josh Hazlewood was rightly named player of the match for his figures of 3/22 as well as the except super over. His T20 form continues to go from strength to strength and he was rewarded handsomely for it yesterday going for 1.5million in the IPL Auction.

Both teams now move onto Canberra for the third T20I in the series which will take place at Manuka Oval on Tuesday.