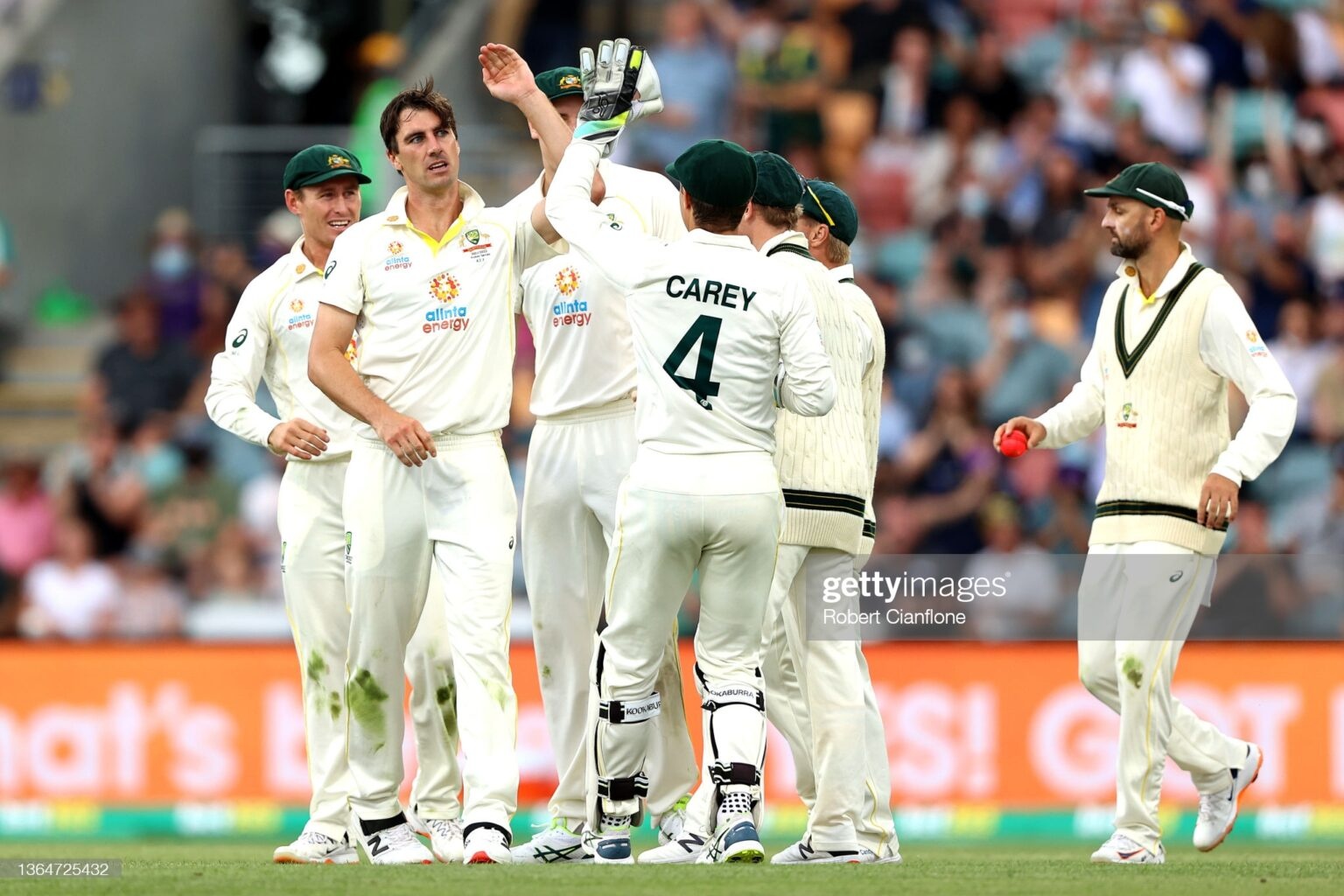 Australia has taken the ascendancy at the Hobart Test bowling England out on day two and now lead by 152 runs with three wickets in hand.

Australia has taken the ascendancy at the Hobart Test bowling England out on day two and now lead by 152 runs with three wickets in hand.

Day two of the Hobart Test was the moving day as the game moved past both first innings and through three wickets into the Australian second innings. Australia will look to continue to grow their lead tomorrow which currently sits at 152.

Pat Cummins spoke about his goals for the team with tomorrow's full day of play.

"I'd like to get a lead of at least 300. I've said before there is pink ball sessions where it feels like you're going to take a wicket every ball and somewhere the ball is soft and it feels like nothing is happening."

The day started with plenty of quick wickets for the English with Australia growing their first innings lead from 241 to be bowled out for 303. Mitch Starc and Pat Cummins were both out to Mark Wood for low scores before Alex Carey was bowled by Woakes while trying to up the run rate.

The final partnership of Nathan Lyon and the legendary Scott Bolan put together a huge 23 from five overs to put the score past the 300 marks.

Nathan Lyon smashed three huge sixes including his second ball which went over deep square leg for six off Mark Wood. Interestingly Nathan Lyon has only hit 12 sixes in his international career, six of those have come in his last two innings.

Eventually, the wicket of Lyon came being bowled by Stuart Broad who once again proved that he should’ve played all five Tests with figures of 3-59. What the final wicket meant was the English batters had to come out, once again Rory Burns would have to face the Aussie bowlers after struggling all series.

This time though it wasn’t the bowlers he had to worry about it was himself and Zak Crawley’s calling between the wickets. Labuschagne fielded the ball and threw down the stumps with incredible athleticism to remove Burns, his horror series continues.

While it’s hard to believe that England actually looked good with the bat for a small period, Zak Crawley played a couple of booming drives and Dawid Malan once again targeted his cut shot that he loves so much. Crawley was gone at the end of their eighth over hitting one straight to Travis Head for a score of only 25.

Joe Root and Malan once again put together a good partnership but just as they were looking like taking the game away from Australia Pat Cummins brought himself on to bowl. Cummins took both of their wickets in two overs to break the spine of the English batting lineup.

Ben Stokes cut one to a diving Nathan Lyon at point before Ollie Pope was once again out after looking like a top-quality player for a small period of time.

Pope is an odd one, he certainly looks like a good Test player but just can’t seem to convert all of these starts into a big score, hopefully, that comes with age and more experience for him.

Sam Billings looked the best of the English batters on debut, while there is a lot of frustration about white-ball specialist players he is clearly one that has the ability and the knowledge to be a good Test player. With a lot of talk about Root’s leadership Billings could provide a good option for England going forward.

Sam Billings held his own on debut, he spoke on how much he loves Test cricket.

"Did it look like I was having fun? I absolutely loved it, it was so much better than sitting on the sofa. it was a great challenge against the best in the world. It was just a shame that I got out when I did.

"I'm loving every minute of it and am appreciative of all the messages I've got through. It's blown me away. I've been able to enjoy it more than on previous occasions when I've played for England."

Billings and Chris Woakes put together a partnership of 42 which clearly frustrated the Aussies but as soon as Billings was out England fell with ease. Mitchell Starc cleaned up the tail along with Pat Cummins picking up the final wicket, both of those men were the standouts with the ball with figures of 4-45 and 3-53 respectively.

The final wickets meant the Aussies would have to come out for a difficult session of just over an hour. The pink ball under lights in humid dewy conditions was never going to be easy against quality seam bowling and that was shown by the Aussies final score of 37/3.

Interestingly Nathan Lyon was not required with the ball in Australia's first bowling innings, Pat Cummins spoke after the day's play about the advantage having Cam Green in the side brings.

"It's huge, I felt like in the cool conditions if we could just two quicks operate and then switch ends. It's a real luxury and I'm sure Nathan Lyon would've done a good job he's been incredible in this series.

"Cam Green is a real asset he's an all-rounder and a genuine fourth quick."

Sam Billings spoke about the English batting after stumps.

"The most disappointing thing is that when we arrested any momentum we lost a wicket. It was a real mix of dismissals, it was a mixed bag."

David Warner once again fell to Stuart Broad to a ball that he shouldn’t have played at, it was too wide and too short, but Warner just felt like he needed to push his hands at the ball.

With nine Tests in Asia and some good young opening batters coming through there is a chance we just saw the last David Warner innings in Australia.

Out came Marnus Labuschagne who looked to just survive once again but it wasn’t to be with him edging behind a ball down the legside to Sam Billings to give him his first Test catch as a keeper.

Labuschagne will no doubt be disappointed but with his technique of walking across the stumps, it’s just something he’s going to have to either fix or deal with.

Usman Khawaja tried to survive but his nature to score didn’t do well with the conditions and he was outdone by a very quick Mark Wood bouncer. The wicket just showed how important that extra pace is which most English bowlers just don’t possess.

Pat Cummins spoke after the days play about where he thinks the game is positioned.

"Bowling them out for 180 was a great result, the pitch seamed around a little bit but I thought we bowled really well.

"These are the kind of night sessions you have to watch out for in day-night cricket, with it being quite humid it always seems to do a little bit more as well. Even though we are three for thirty-odd it's a good effort in these conditions."

Scott Boland came out as the night watchman and managed to defend 25 balls alongside Steve Smith who looks in the zone finishing the day on 17.

Tomorrow Smith will be looking towards getting his first Test century of the series, and his first in over a year. He’s too good to miss out especially with plenty of time in the middle tomorrow before the lights come back on.

Sam Billings suggested after the match that England are still in this game.

"I think we have an opportunity, I think we bowled nicely tonight, created a lot of chances and opportunities and held our lengths. Tomorrow is a huge session, obviously, they are in front but we have a chance tomorrow to make a big statement."

Australia will come back out tomorrow with the score on 37/3 leading by 152 runs with play starting at 3pm AEDT from Bellerive Oval in Hobart.