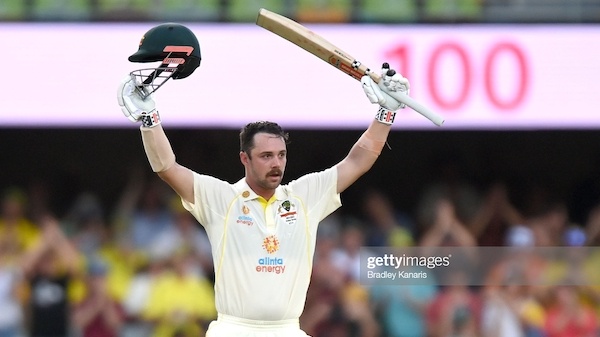 Australia superior in Ashes opener at the Gabba

Australia moved 1-0 up in the Ashes, with a nine wicket win at the Gabba. New captain Pat Cummins led from the front, while Travis Head made 152.

Australia superior in Ashes opener at the Gabba

Australia moved 1-0 up in the Ashes, with a nine wicket win at the Gabba. New captain Pat Cummins led from the front, while Travis Head made 152.

Australia has won the first test match of the Ashes series by nine wickets at the Gabba; Travis Head starred with the bat, while Pat Cummins took five-for in his first match as captain.

It was a perfect start for Australia on Day 1 of the first Ashes Test match in Brisbane, with Mitchell Starc bowling Rory Burns for a duck with the very first delivery of the series.

Australia was fired up and took three more wickets before lunch.

Josh Hazlewood struck, Dawid Malan edging one through to Alex Carey for his first catch on test match debut. Then he got Joe Root a couple of overs later, caught at first slip by David Warner.

The final wicket of the session was new captain Cummins' first in his new role, sending Ben Stokes back to the dugout thanks to a Marnus Labuschagne catch at third slip.

Ollie Pope and Jos Buttler put together the partnership England desperately needed through the second session, however, they both fell in quick succession.

Buttler departed for 39, caught behind by Carey off the bowling of Starc. Then Cameron Green finally picked up his first Test wicket, Ollie Pop caught in the deep by Hazlewood for 35.

Ollie Robinson sent a thick outside edge through to Carey for a duck, to start Cummins demolition of the lower order.

Mark Wood was caught by Marcus Harris for eight, then Chris Woakes was caught by Hazlewood. Cummins finished with five wickets, as England was knocked over for 147.

The final session of the day was called off due to bad light.

Head's day out at the Gabba

Australia's opening batters Harris and Warner strolled out to the crease to resume play on Day 2 of the Ashes Gabba test.

Harris fell first, a Robinson delivery taking a thick outside edge through to Malan, but it brought Marnus Labuschagne to the crease to build a partnership with Warner.

England rued front foot no-balls, with Stokes' effort to remove Warner when he was on 17 denied by the third umpire.

Labuschagne brought up his half-century off 71 balls, and then Warner did the same (52 off 102).

Dropped catches and poor fielding, including missed run-out chances, hurt England throughout Day 2, but finally Jack Leach broke through with the wicket of Labuschagne (74 runs).

Smith fell cheaply, Warner was gone for 94 and then Green left a Robinson delivery that went right through his stumps.

Redbacks' teammates Carey and Travis Head were in the middle together for the first time for Australia and made tentative starts at the crease. Head quickly found his groove, while Carey pulled at one and picked out the fielder at mid-wicket to go for 12.

Head's half-century came off just 51 deliveries and his century off 85.

It was a remarkable innings, given the South Australian's slow start to just six runs from his first 18 balls faced and some interesting shot choices.

However, he settled swiftly into his natural, attacking play and cruised to the first milestone, before bringing up the second 50 from just 34 balls.

While he lost his captain, Cummins, Head was settled in partnership with Starc at the end ofDay 2.

Head and Starc resumed at the crease to start Day 3 at the Gabba.

Starc put on a quick flurry of runs before getting caught by Burns off the bowling of Woakes, and while his batting partners continued to fall around him, Head kept putting runs on the board for Australia, working his way to 150.

Lyon added 15 to Australia's tally, before getting caught by Robinson off the bowling of Wood.

Head was then bowled by Wood, ending Australia's first innings on 425, leading by 278 runs.

England returned to the crease and started much better than the first innings, making it to the ninth over before the fall of its first wicket.

Burns edged a Cummins delivery through to Carey.

Warner was not on the field for Australia to start this innings, a rib injury keeping the opener on the sidelines.

Starc struck, removing Hameed, caught by Carey and England was once again in a challenging spot at 2/61.

Root and Malan pulled it together for England, scoring runs with patience. Root passed 50, and Malan followed a few balls later.

At the end of the day, the pair were in the 80s, but England still trailed by 58.

Finally 400: Lyon hits the milestone at the Gabba

Lyon struck early on day four, removing Malan for 82, with some help from Labuschagne who took the catch.

With that, he becomes just the third Australian to reach the milestone, sitting behind Shane Warne (708) and Glenn McGrath (563).

Root fell shortly after, caught by Carey off the bowling of Green, departed for 89.

The English tail put on a few runs to re-take the lead, but was bowled out for 297, setting Australia just 20 runs to win the first test.

There was no need to risk Warner, who had not taken to the field in England's second innings, so Carey opened the batting with Harris.

It was a familiar role for the keeper, who does it in Shield cricket for the Redbacks.

While Carey fell for nine, Harris got the job done and Australia won the opening test of the Ashes series on home soil.

Australia will look to move 2-0 up in the series, when it travels to Adelaide for the day-night test at the Adelaide Oval on December 16.