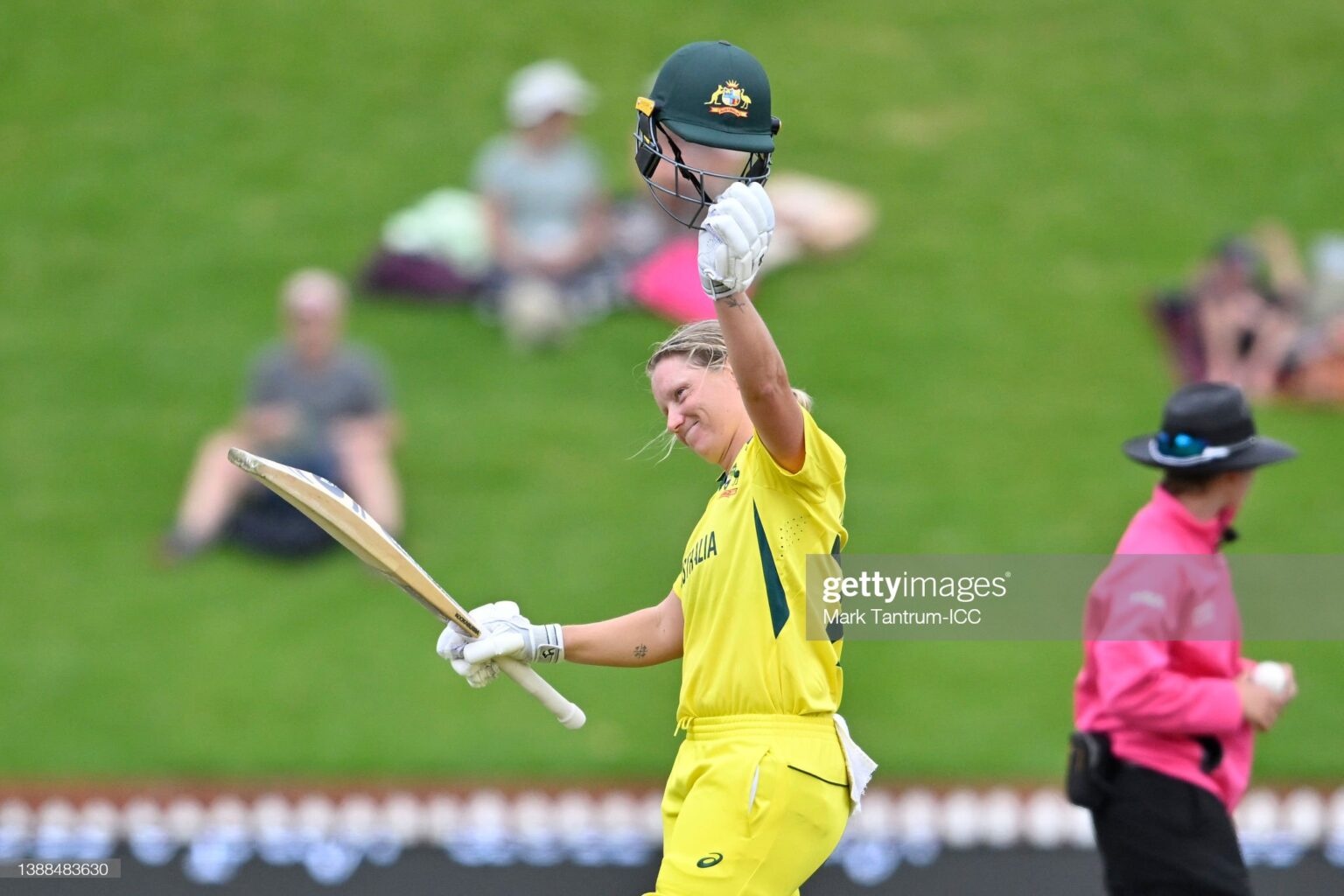 Australia rolls past West Indies and into World Cup Final

Australia smashed the West Indies by 157 runs in the World Cup semi final, thanks to an Alyssa Healy century, booking place in the final.

Australia rolls past West Indies and into World Cup Final

Australia smashed the West Indies by 157 runs in the World Cup semi final, thanks to an Alyssa Healy century, booking place in the final.

Australia has thumped the West Indies in the Women's Cricket World Cup Semi Final, with a 157 run win in a rain-affected match in Wellington.

The Australians suffered a blow before the semi final started, with talented allrounder Ellyse Perry ruled out, after suffering back spasms.

The mood would not have improved in the Australian camp when the team woke up on Wednesday morning, with rain around, and heavy cloud. The toss was delayed, and the match was reduced to 45 overs for each side.

If there were expectations of a lower total with the reduced overs, somebody forgot to tell the Australian openers, as Rachael Haynes and Alyssa Healy set about building a big total.

Haynes and Healy dispatched the West Indian attack to all parts of the ground.

The Australian openers scored at a strong pace, bringing up their 200 run partnership after 30 overs.

Healy spoke after the match about the relationship that she has with Haynes, and the midset of the partnership today.

"For me to walk out with Rach, who is the ultimate calm head, she's got a great cricketing brain," Healy said.

"For me to be able to bounce ideas off her, while I'm bouncing around at the other end full of energy is really cool.

"Form the second ball today, that she smashed through the covers, we glove punched, and I saw this look in her eye, that said 'Come on, we're going to go big today', and from that moment, it scared me a little bit, and I thought I better switch and pay attention on, at the other end and make sure I'm doing my job.

"To have someone like that at the other end, it makes my job easier."

Healy was eventually dismissed for 129, off just 107 balls in the 33rd over. Haynes joined her just a couple of overs later, out for 85 from 100 balls.

"For me today, to be able to go on and help the team get to a big total and get a really big score on what wasn't exactly the flattest wicket going around - it was doing a bit - so, that was probably more pleasing than anything else, but it's always fun sharing the crease with Rachael Haynes, so that was good as well.

Ash Gardner was dismissed not long after, for just 12, after trying to ramp the scoring rate up.

Her dismissal left nine over for Meg Lanning and Beth Mooney to negotiate. It was a challenge they thrived in, with Lanning scoring a run-a-ball 26, and Mooney finished with an unbeaten 43 from just 31 deliveries.

By the time it was all said and done, the Australians had put a mammoth 3/305 on the board in just 45 overs.

"it was probably exactly what we'd been searching for this whole World Cup, which was awesome, and to be able to do it on the big stage, under pressure, as a group, was really pleasing, and hopefully we can do it once more on Sunday.

The West Indies' chase was off to a poor start, as Rashada Williams was dismissed for a 10 ball duck, caught by Beth Mooney from the bowling of Megan Schutt.

Deandra Dottin and Hayley Matthews tried to build a platform for late-innings heroics, but their partnership fell when Dottin was caught by Annabel Sutherland from the bowling of Tahlia McGrath.

Matthews then partnered with Stefanie Taylor, who top scored with 48. As the pair were starting to find their rhythm, Matthews holed out to Alana King, leaving the West Indies 2/91 in the 23rd over.

From there, it was all downhill, as the West Indies struggled to build partnerships, and fell well behind the scoring rate. Wickets fell regularly, and the West Indies found themselves at 8/148, and essentially all out, with injured duo Anisa Mohammed and Chinelle Henry unable to bat.

It was a strong Australian performance all around the team, according to Healy.

"At the end of the day, it hasn't been a one-man show at any point. I think there's four batters in the top five scorers, all our wickets are spread across our bowling attack.

"From my point of view, someone was going to step up today and do a really good job for our group, and I think multiple people did today, so that was just really pleasing and we know that any one of us can do it in any situation, which is awesome.

"It's a great thing, for our group, to be in a one day World Cup final. It's exactly where we wanted to be when we landed in New Zealand. We knew we wanted to be in Christchurch on the third of April and we were going to do everything we could to get there."

Australia's 157 run win over the West Indies puts the Aussies into the final of the Cricket World Cup on Sunday. Ellyse Perry is reportedly a chance to return for the final.