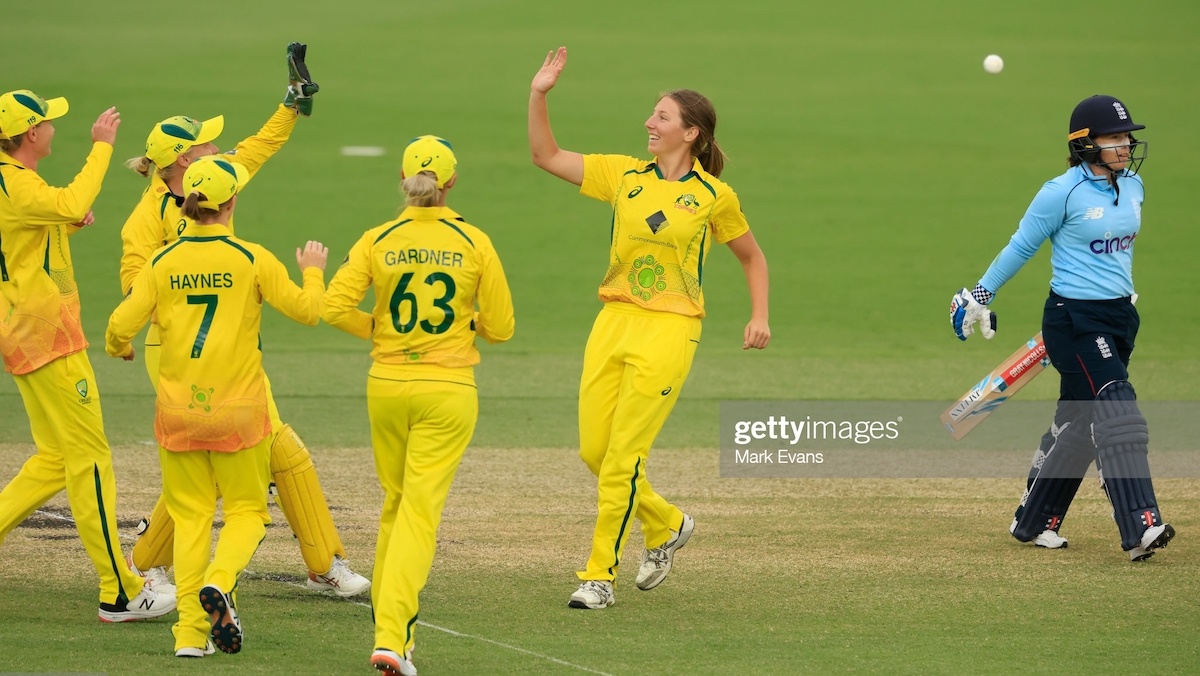 Australia retain the Ashes thanks to South Aussie bowling brilliance

Australia has retained the Ashes with a 27 run win over England in the first ODI, led by the South Australian trio of pace bowlers.

Australia retain the Ashes thanks to South Aussie bowling brilliance

Australia has retained the Ashes with a 27 run win over England in the first ODI, led by the South Australian trio of pace bowlers.

Australia has retained the Ashes with a 27 run victory over England. The trio of South Australian bowlers - Darcie Brown, Tahlia McGrath and Megan Schutt - rose to the occasion, ripping through the English batting order and keeping the Ashes in Australia for another series.

Beth Mooney also starred with the bat, her 73 run innings earning her player of the match, as the crucial contribution helped Australia set a defendable 205 run total.

She did, however, leave the ground early in the second innings with quad tightness and did not return to the field this evening.

Speaking to media post-match, teenage pace bowler Brown said that while her ice bath had interrupted celebrations, she was excited to be a part of the team who kept the Ashes.

"[It is] pretty special to be part of the Ashes and to retain it with this group is special...

"We backed our bowlers to defend that total because we've got a pretty good bowling lineup. We weren't too fussed about it."

Australia lost the early wicket of Rachael Haynes for just four runs, a strong early spell from Katherine Brunt had the home side tentative and slow to start.

Meg Lanning made 28 before she was bowled by Kate Cross, while Ellyse Perry lasted just one delivery, caught and bowled by Sophie Ecclestone.

Alyssa Healy fell shortly after, stumped by Amy Jones off the bowling of Cross and Australia was in all sorts of strife.

The runs started to flow for Mooney and McGrath though, as they settled into their innings, the former hitting the first maximum more than 30 overs into the innings.

Brunt came back into the attack and broke the partnership, bowling McGrath for 29.

Ash Gardner did not last too long before she was run out for 12, the sixth wicket to fall for Australia. At this point in Australia's innings reaching 200 looked a real challenge, however with Mooney at the crease they pressed on.

Mooney was removed for 73, but her effort with the bat gave the bowlers something to defend.

Brown said post-match that the team had full confidence in the bowling cartel to get the job done, despite the "small-ish" total on the board.

Australia started well, too, with Brown taking the early wicket of Tammy Beaumont, caught at slips by Lanning.

With her next delivery, she claimed English captain Heather Knight for a duck, trapped LBW.

On a hat-trick, Brown was just millimetres from taking a third wicket in a row, something she moved on from pretty quickly.

"I just focused on each ball and I guess I wasn't too worried about a hat-trick, just as long we got the result and that's all that mattered," she said post-match.

With only 205 on the board, it was important Australia continued to take wickets and they did. Schutt had Lauren Winfield-Hill caught by Gardner at deep midwicket for 13, then Amy Jones was caught by Perry off the bowling of McGrath.

Brown jumped in for a third and fourth wicket, while Schutt and McGrath picked up another one each. The first eight wickets were all taken by South Australian bowlers.

While the pressure mounted and England drew close to the total, Australia appeared to falter, throwing a couple of chances, including a dropped catch by Perry that would normally be taken by the experienced all-rounder.

Finally, Jess Jonassen picked up the remaining two wickets and Australia retained the Ashes with a 27 run win in the first ODI.

Brown's role has increased over the course of the summer, with a foot injury to Tayla Vlaeminck opening up a regular space in the playing XI.

It's been a surprising opportunity for the young bowler, who at 18 years of age is living the dream playing Ashes cricket.

"I wasn't really expecting to play too much," Brown said after the match.

"I was thinking I was just going to run drinks but yeah, I guess that was just credit to the coaches and my teammates that have backed me in and have full belief."

That help has not just been from coaches, with her squad mates supporting her every step of the way.

"Early on Tay Vlaeminck was really, really helpful to me, especially in the India series...

"I remember, before the first ODI, she let me come into her room we looked at a few plans and stuff like that we're pretty similar in the way we think about things. So we didn't really want to write too many things down. So yeah, she's been a real help.

"Shooter (Megan Schutt) and T-Mac (Tahlia McGrath), as well as Bellsy (Annabel Sutherland), she's been pretty good and Pez (Ellyse Perry), so basically every bowler." Brown laughed as she admitted.

‘NO PLACE I’D RATHER BE’: SUTHERLAND RELISHES JOB IN RECENT ASHES TEST ROLE

AN ASHES DRAW AS ENGLAND HOLD ON LATE AT MANUKA OVAL

KNIGHT SUCCEEDS IN QUEST TO FRUSTRATE AUSTRALIA IN ASHES TEST

The key to Brown holding her place in the side during the Ashes series has been finding more consistency in her bowling, something she worked on through the WBBL season with the Adelaide Strikers.

"I guess just bowling full, I mean, in the India series, I bowled a bit short and I can swing it sometimes if I pitch it up.

"So I guess that's one of my weapons and if I bowl short, then I'm sort of taking that away, as well as keeping the short ball as a variation to then keep the batters a bit surprised."

How does she stay in the side and keep improving ahead of the World Cup in March?

"Hopefully just keep pitching up and [being] a bit more consistent," Brown said.

The squads will now travel to Melbourne for the second ODI at Junction Oval, which will begin on Sunday at 10:05 am AEDT.