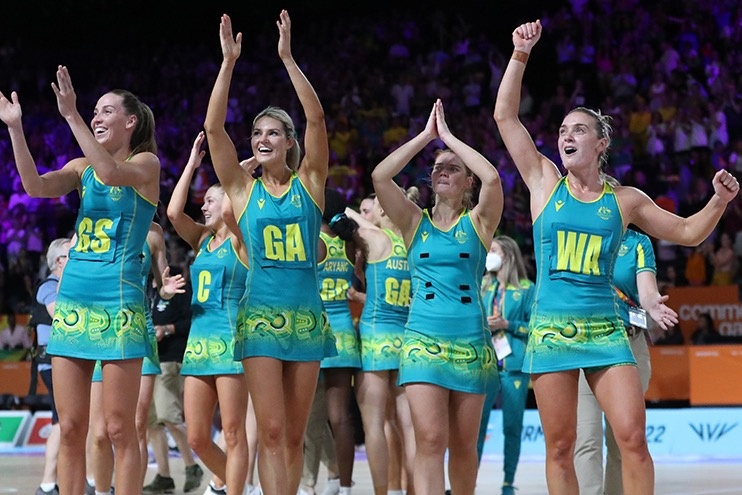 Australia has found redemption with a gold medal over Jamaica in the netball at the 2022 Commonwealth Games.

Australia has found redemption with a gold medal over Jamaica in the netball at the 2022 Commonwealth Games.

In a thrilling Grand Final, Australia was out for revenge, and hoping to restore their place in netball's hierarchy with a gold medal, four years after being forced to settle for silver on the Gold Coast.

On Friday morning / Thursday night, Jamaica had pulled away in the final quarter, 17-9 to take a two-goal win over the Australians and book top spot in their pool.

Australia struggled to move the ball early, forced to make long possession chains and short passes to get the ball into the circle and get a shot up.

A few nerves were on show for the Jamaican midcourters early in the first quarter, with a few balls thrown away that Australia could pounce on.

Despite those turnovers, Australia didn't find any fluency in attack, as Shamera Sterling and Latanya Wilson pounced on any loose ball or aerial pass.

After nine minutes, the Australians were four goals up, but a couple of loose turnovers late in the first quarter gave Jamaica a window to fight back, and bring the score to 14-12 at quarter time.

Australia's slim lead didn't last long into the second quarter, as Jamaica evened up the contest in the first couple of minutes.

As Jamaica had the momentum, Diamonds' coach Stacey Marinkovich rang a couple of changes, bringing Cara Koenen and Sarah Klau into the game at each end of the court. The extra height immediately made an impact, despite the scoreboard continuing to look level.

Klau had a tip on a feed to Jhaniele Fowler, and there were a few flat feeds that looked as if they may be primed for the opportunity for Klau to fly for.

At the other end, Koenen's work along the baseline was confusing the space for Shamera Sterling, and gave the Australians a slightly easier path to goal for a few minutes, as she was able to create space close to goal.

After each side traded goals late in the second quarter, the score was 29-all at half time, with the two teams left to fight for 30 minutes to decide the gold medal.

The Australian team was more collected and calm early in the third quarter, as the attacking circle found its rhythm. At the other end, Klau and Courtney Bruce each picked up a couple of tips to give the Australians extra ball.

In a flash, Australia had pushed the lead into double digits (briefly), as Australia forced a change for Jamaica, with Adean Thomas coming onto the court.

Late in the third quarter, the Sunshine Girls pulled back a couple of goals to bring the score back to 45-39 at three quarter time.

The Jamaicans grabbed the first turnover of the final quarter to start to make the Australians nervous, trying to bring down the margin early.

Slow play and interrupted rhythm early in the fourth quarter plagued the Australians, as the Jamaican defence got on top and brought the score back to within three by the halfway point of the final term.

The Australians responded, with Klau and Bruce continuing to win ball back, and Cara Koenen stepped up to bring stability at the attacking end.

With two minutes to play, Australia led by six goals, and did enough to hold on for the win. Australia closed out the win 55-51, with Liz Watson holding the ball at the end, in a fitting moment for the Australian captain.

It was a story of redemption, after a heartbreaking solver medal four years ago, and a history-making win, as the first team to record a loss and still win a gold medal in the same Commonwealth Games.