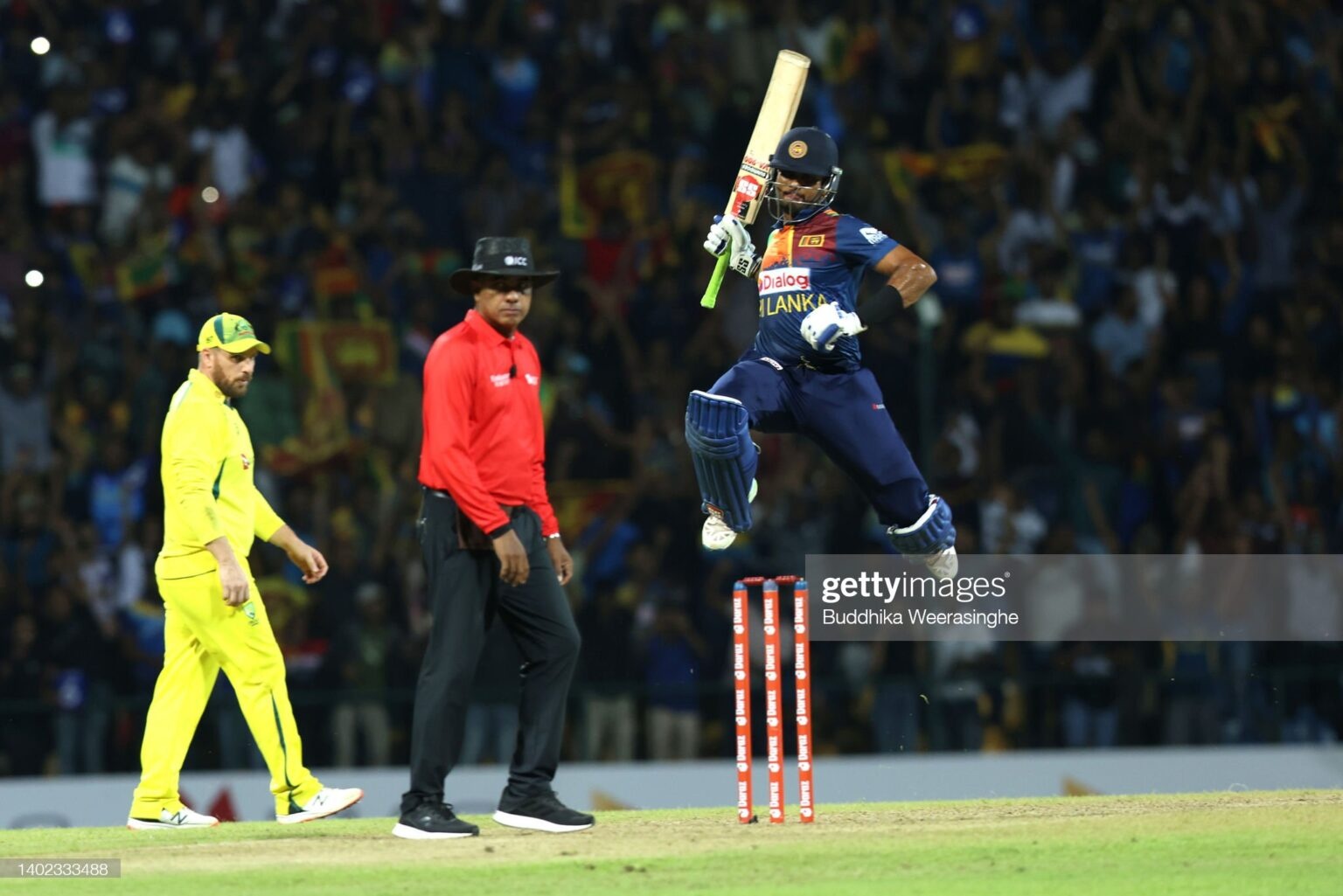 There has been a magical Sri Lanka comeback thanks to an amzing 54 from 25 by Dasun Shanka has made sure Australia wouldn't sweep the series.

There has been a magical Sri Lanka comeback thanks to an amzing 54 from 25 by Dasun Shanka has made sure Australia wouldn't sweep the series.

A magical Sri Lanka comeback thanks to an innings from Sri Lankan skipper Dasun Shanaka has made sure Australia wouldn’t be taking a 3-0 win of the T20 series. Instead, Sri Lanka gets the win and importantly will take the momentum into the upcoming five ODI series.

Australia changed up their tactics in this match with Aaron Finch deciding to bat first in a match where the result didn’t matter all that much. To begin with, the decision looked a sensible one, at least for the captain himself with Finch (29) getting into the 20s before Warner (39) had moved past four runs.

The openers continued to find the rope, which was until Theekshana (2/25) bowled the perfect wrong’un that hit the top of the off-stump with Aaron Finch trying to slog-sweep the ball into next week. Interestingly the wicket brought Glenn Maxwell (16) to the crease at number three, it may have been an inspired choice but in reality, a sensible one when you remember Maxwell’s 145* in his last innings at this ground.

Maxwell was up to three due to the injury of Mitch Marsh who has once again pulled his calf. Josh Inglis (0) came into the side but to be honest he would’ve preferred to stay on the bench. Maxwell, Warner and then Inglis all went within consecutive balls in the middle of the innings to really put the brakes on what was looking like a 200+ score.

Steve Smith (37*) and Marcus Stonis (38) were then tasked with rebuilding the innings and they did so for a good period even if the run rate slowed considerably during this time. Unfortunate for the Aussies just as Stoinis started to find the rope he walked past a spinning ball and had to walk off the field after the keeper whipped the bails off.

Australia finished strong hitting 43 runs off the last four overs with Matthew Wade (13*) and Steve Smith finding the rope with plenty of gusto. The innings may have even eliminated some fears that Smith can’t be afforded in this side, hopefully, he can do it in the ODIs going forward.

Australia’s final score of 5/176 was always going to be imposing but it wasn’t quite enough.

With Australia not going in with their full-strength bowling lineup and in fact only having four full-time bowlers, this chase was always gettable for Sri Lanka. That being said with plenty of talent in the line-up Australia would’ve been easy favourites going into the second half of the match.

Sri Lanka though started perfectly with a four out past point from the bowling of Jhye Richardson (1/46), which was later followed by one through the covers later in the over. At the end of the third over the Sri Lankans looked right on top, but of course, then enters Josh Hazlewood (2/25).

Hazlewood went in short and grabbed the top edge of Gunathilaka’s (15) bat that then flew out to fine leg with the catch easily being taken. The wicket though hardly stunted the chase with Nissanka (27) and Asalanka (26) both found the rope, things weren’t looking good at all for the Aussies when the part-timers had to start coming into the attack.

But as it so often goes with cricket it was the man you would’ve least expected who took the wicket. Marcus Stoinis (2/8) grabbed a top edge from a short ball that once again flew out to fine leg, the wicket was perfectly timed with it slowing the run rate significantly.

A couple of overs later Stoinis took another one before a few more wickets fell at regular intervals. With Sri Lanka needing 65 from the last 24 balls, it was looking like another Aussie win, especially with Sri Lanka only having four wickets in the shed. That wasn’t to be though.

Agar ( 1/23) bowled the next and kept the over to only six runs, 59 from 18 were now needed with the Sri Lankan skipper on six runs from 12 balls. Josh Hazlewood would come on next with Finch looking to wrap up the game, but there was one more twist in this one.

Shanaka (54) went 6,6,4,4 in the middle of the over to take 22 from the over and make it 37 from 12. Hazlewood figures looked good overall with 2/25 but that is largely flattered from his first spell.

Jhye Richardson was the next on to bowl and he started horribly, a six went over mid-wicket before two more fours came in the over to make it 19 from the last six balls. Shankar had moved from 6(12) to all of a sudden be 39(21).

With one over to go Kane Richardson (0/44) was given the task of finishing the match off. He started with plenty of wides, before a couple of singles came from the batters. With four balls to go SL needed 15 from four and then Shanaka when bang, bang, bang to make it only one needed from one. Richardson was searching for the wide yorker but missed his line finishing the match off with a wide.

Sri Lanka deserved every part of that win; it was one of the best knocks you will ever see from Dasun Shanaka. They will now take the momentum into the ODI leg of this tour which begins in a couple of days’ time.

Australia of course still wins the series with Aaron Finch being named player of the series, so it seems like the pressure may be slightly off him compared to this time last week. Overall, a great series of cricket that finished incredibly excitingly.