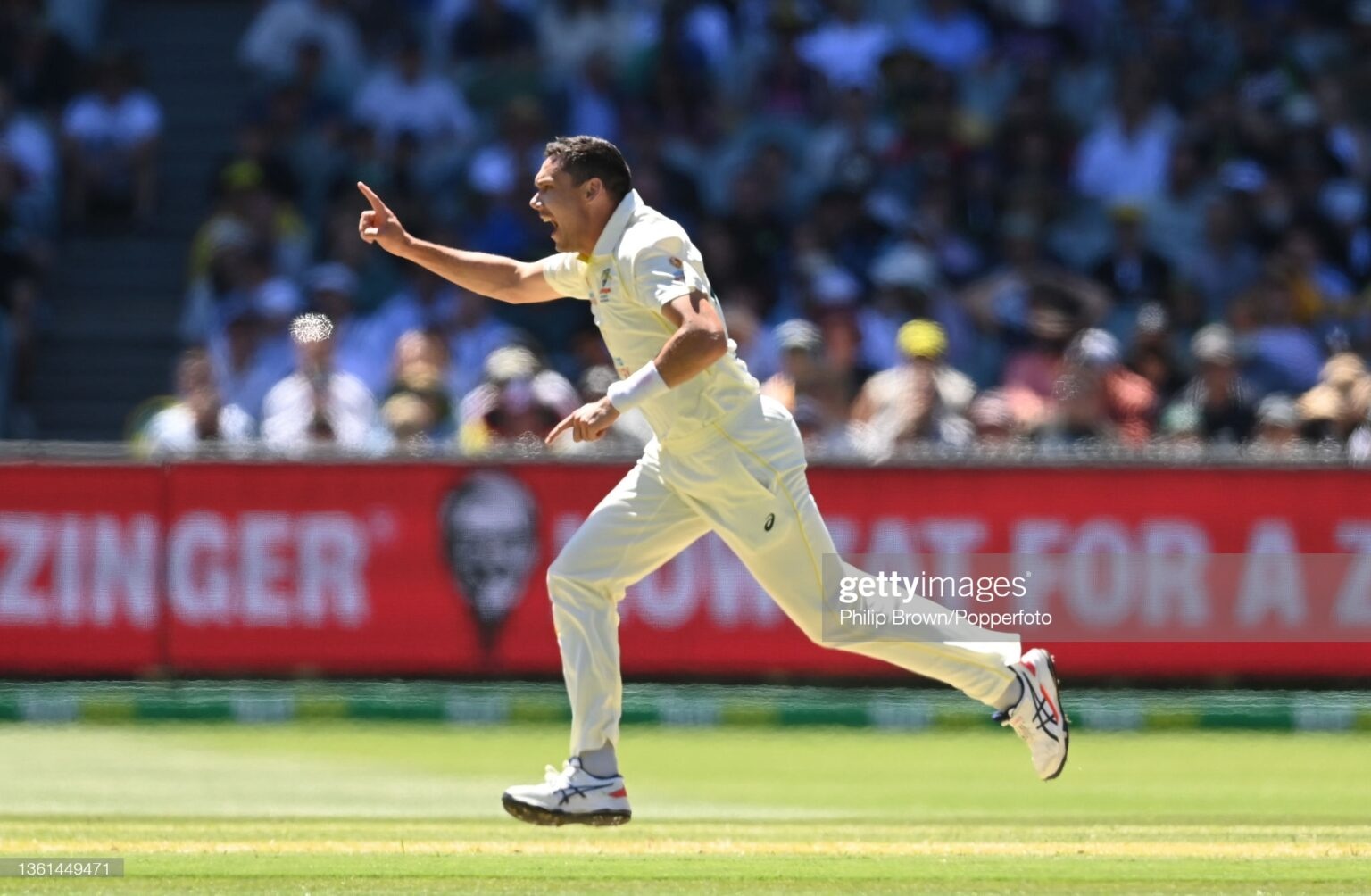 Australia has dominated the Boxing Day Test to retain the Ashes, after thrashing England by an innings and 14 runs.

Australia has dominated the Boxing Day Test to retain the Ashes, after thrashing England by an innings and 14 runs.

The Australian fast bowlers produced a performance to remember in the Boxing Day Test, as the hosts thumped England by an innings and 14 runs to take a 3-0 series lead, and retain the Ashes.

Pat Cummins, after returning from Covid isolation and missing the Second Test, won the toss and sent England in on a grassy wicket.

After bowling England out for 185, Australia scored 267 in reply, with a rearguard action from Mitch Starc and Cummins pushing up the total.

England were then forced to bat for an hour, late on Day 2, and the match fell apart before their eyes. By stumps, the English had fallen to 4/31, leaving them little hope of a large enough lead to fight for a win, and facing a battle to make the Australians bat again.

Late on Day 2, Cummins and Starc had produced an opening spell that was fast and accurate, giving few loose balls for the batters to release pressure.

Starc and debutant Scott Boland reached finished with two wickets at the close of play, as the Aussies smelled blood in the water.

Early the next morning, it appeared that Ben Stokes and Joe Root would fight on, before Starc bowled Stokes through a gap between pad and bat.

From there, the hometown hero, Boland, came to the fore with four wickets, finishing with figures of 6/7 from four overs, setting himself up to win the Johnny Mullagh Medal for man of the match on debut.

Cameron Green took the final wicket, as the Australians celebrated mopping up the English batting line up in 82 minutes on the third morning.

The Australians now have a 3-0 lead and will retain the Ashes, heading into the final two test matches in Sydney and Hobart.

MITCHELL STARC HAS PROVEN HIS VALUE IN THE ASHES

After the match, English captain Joe Root was devastated as he spoke to the media.

"I'm absolutely gutted. Very disappointed. You turn up today with Ben Stokes, and you feel like anything is possible and we're bitterly disappointed to find ourselves in this position," Root explained.

"Everyone in that dressing room is gutted. That's not a good enough performance, and we all know that.

"We need to put some pride back into the badge and make sure we go away from this tour with that.

"We have to do everything we can, in terms of supporting everyone and making sure everyone is as ready as best we can, but ultimately, it's got to come from within individuals, and being there for one another."

Meanwhile, Australian captain Pat Cummins was floating, after sealing an Ashes victory inside his first three Tests as captain, and with a home crowd in support that fed off the energy of his fast-bowling cartel.

"It's all gone to plan so far, even yesterday, it felt like a day that England played really well, but we managed to wrestle it back late in the day. It's just worked out fantastically so far," Cummins said.

"To go 3-0, for this team. to win the Ashes, it's the first Ashes victory for a lot of the guys in the team, so it's just a great feeling."

For Australia, this series has been a pleasant change from last summer, where the same three fast bowlers (Cummins, Starc and Josh Hazlewood) played all four Tests against India, and were worn down by the end of the losing series.

This time around, six fast bowlers have played across the first three Tests, and Cameron Green has come to the fore as a lethal fast bowling option as well.

"Our bowlers have been fantastic. There hasn't been a session where I felt like the session got away from us, it's what dreams are made of, the way we played," Cummins said.

"Outside the actual results, there have been so many other positives. We've been able to have a couple of debutants and really build. strong of 15-off players.

"It doesn't feel like a 3-0 victory, it feels like we're setting ourselves up for the next few years as well.

"We've got a great group of 15-20 guys we can pick from, and I think we've got options for anywhere in the world."

The Australians have plenty to play for, despite the fact that the Ashes have been secured by the end of the Boxing Day Test.

With difficult tours to Sri Lanka and Pakistan scheduled for later in the year, and the prospect of a tour of India a year away, Australian depth will be very important.

"The Test Championship is now a big thing. I absolutely want to be in that final in a couple of years time," the Australian captain explained.

"I think winning away from home - we've got a great opportunity to go on a couple of subcontinent tours and I think that's a big challenge for any test team. You can see England coming here, and its foreign conditions for them."

The Fourth Ashes Test will be played at the Sydney Cricket Ground from 4 January 2022.