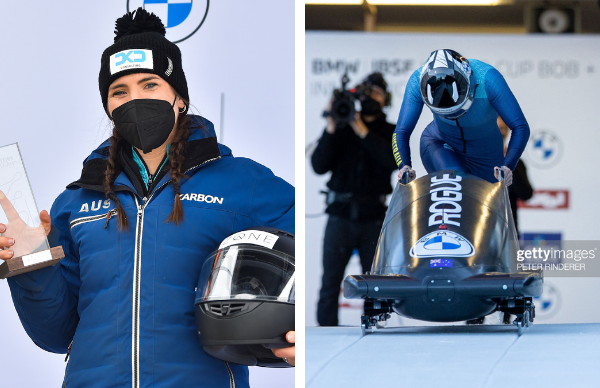 Australia's top bobsleigh drivers Ashleigh Werner and Bree Walker are on the cusp of both qualifying for Beijing 2022 with one week of qualifying to go.

Australia's top bobsleigh drivers Ashleigh Werner and Bree Walker are on the cusp of both qualifying for Beijing 2022 with one week of qualifying to go.

Four years after Walker and Werner earned and Olympic spot as a team but weren't sent to Pyeongchang, both athletes are on the cusp of earning quota spots in their own right.

Competing at separate competitions this weekend both Werner and Walker slid their way onto a monobob podium whilst finishing inside the top 10 in the two-woman bobsleigh.

Werner started the weekend for the Australians on Thursday in Innsbruck, Austria, competing in back to back competitions.

In the first World Series event, she finished in second with a time of 1:51.86, 0.13 seconds behind victor Germany's Stephanie Schnieder.

It was a slower competition at Werner's second World Series event, with the winner France's Margot Boch being the only driver on the podium to replicate a time within one-tenth of a second of their time the day before, finishing with a 1:52.17.

It marks the second week this season that Werner has made her way onto multiple podiums in the same week, winning three silver medals in three days in Lake Placid back in December, and is her fifth monobob podium for the season.

Walker's incredible season continued into the second weekend of the new year with a silver medal in Winterberg, Germany.

The 29-year-old might have finished 0.17 seconds behind winner Elana Meyers Taylor from the United States, finishing with a combined time of 1:58.93 but if it weren't for a crash on the final corner of her first run she could have won having the best second run of the field with a time of 59.44.

Walker's silver in Winterberg was the Australian's fifth consecutive podium and maintained her second place inworld rankingsfor the 2021/2022 season with 1006 points, just three points ahead of American Kaillie Humpries and four points ahead of Germany's Laura Nolte and Canadian Christine De Bruin.

Meanwhile Werner is ranked 17th in the world with 616 points and with one week remaining to earn a quota spot is going to need another big weekend to potentially earn Australia a second quota spot in the Women's Monobob at Beijing 2022.

Despite neither Werner and Walker making their way onto the podium this week in the two-woman bobsleigh, Australia's Olympic hopes of having two quota assignments are looking better than ever.

Werner's successful weekend continued teaming up with brakewoman Tia-Clair Toomey narrowly missing the podium at the European Cup in Innsbruck.

Her fourth place finish was 0.49 seconds behind winners Maureen Zimmer/Neele Schuten from Germany with a combined time of 1:47.96.

Currently Werner is the top Australian two-woman bobsleigh driverranked 21st in the worldwith 730 but Walker isn't too far behind in 26th with 658 points.

Walker showed why Winterberg is her favoured track finishing in eighth after two runs, one off her career-best finish in the two-woman bobsleigh with new team member Kiara Reddingius.

Just a week after crashing in her first run in Sigulda, Latvia, Walker was unphased by the snowfall on track finishing with a combined time of 1:57.91, 0.76 seconds behind gold medallists Laura Nolte/Deborah Levi.

With one week left to earn Olympic quota spots, Australia is in position to qualify two sleds in the two-woman bobsleigh.

It will hinge on Walker's results next weekend in St Moritz as she will need to have a better result than Belgium's An Vannieuwenhuyseto ensure Australia keeps its second quota spot.