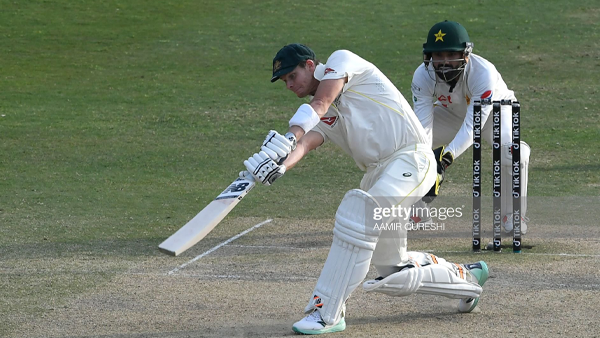 Day Four of the first Test between Australia and Pakistan came to a close with bad light after the Australians all failed to meet milestones with the game drifting away and likely to end in a draw.

Day Four of the first Test between Australia and Pakistan came to a close with bad light after the Australians all failed to meet milestones with the game drifting away and likely to end in a draw.

Australia batted out through a wet Day Four against the first Test against Pakistan to make sure this match will almost certainly end as a draw. Three of the batters today got close to milestones but neither got over the line, becoming frustrated with the defensive bowling tactics of their opponents.

The day started with a very long wait, particularly for those of us covering the match, and although the rain had stopped, the wet outfield prevented any play. No rain fell in the hour before play was due, but it took until after a late lunch before the Australians batters in Steve Smith and Marnus Labuschagne could get back on the track.

Labuschagne and Smith pushed the ball around once they managed to get into the middle, however, they didn’t play with any real authority ,not looking to score at a rate that would’ve made a game out of this Test. The pair passed the follow-on score before then pushing the score past 300.

Labuschagne was looking good, finding the boundary when needed, scoring well off the spinners, often pushing the ball just past square leg for a single as well. It looked as if he was going to get to that elusive first century away from home, but it wasn’t to be.

He went searching for a cover drive from a wide ball, however, he ended up edging behind to give Shaheen Afridi his first wicket of the series, a much-deserved one as well for the 22-year-old.

Travis Head came out looking good, firstly whipping the ball through mid-wicket before a cut shot that reminded myself of the late Phillip Hughes. Head though is prone to getting out to bad shots and he did so by trying to cut once again just getting a tiny feather on the delivery from Nauman Ali the left-arm finger spinner.

It was then Cameron Green's turn, an allrounder who is on his first overseas tour as an Australian player. He looked good to start although batted quite slow to begin with, scoring only 17 runs from his first 60 balls. He managed to ramp things up alongside Smith who was working hard from the other end.

USMAN KHAWAJA FALLS SHORT OF A FAIRY-TALE FINISH IN PAKISTAN

Within a couple of overs of each other, both batters got out, short of the respective milestones. First, it was Green who got a top edge on a ball down the legside with fine leg taking the catch, departing for 48, with a Test century still alluding him.

Smith also missed out on a century, edging a ball down the legside with the keeper taking a good catch. Smith was clearly frustrated and almost got bored out there with Pakistan consistently bowling around the wicket and down the legside.

Steve Smith was visibly frustrated with his dismissal and mentioned it after play.

“Pretty annoying, I got a bit greedy there. Even if I was hitting that was probably only getting a single. Disappointed in the shot selection and in the position of the game,” he mentioned.

Towards the end of the day, Australia lost its wicketkeeper in Alex Carey who was undone by what was probably the the ball of the match from Naseem Shah, the ball pitching on the off stump then taking the top of the bail.

Carey may be under some pressure if he fails again in the next Test, with Josh Inglis looking good on the sidelines, and he is clearly a massive talent for the future. Inglis is also quite clean with the gloves while Carey has been somewhat disappointing in his short Test career.

Once again the players had to go off for bad light with four overs to go in the day with Pat Cummins and Mitchell Starc starting to score some runs. They will resume in the morning for the start of Day Five in what will most likely peter out to a draw.

Smith touched on the plans for tomorrow for the Australian team.

“Hopefully the tail can stay out there a bit longer, if they do they usually score pretty quickly as well," he said.

“If they do stay out there, there is a chance we set a total and maybe have a bowl. If we get 100 in front and get a couple of wickets you never know.”

Unless a miracle is to happen there is every chance this Test ends up as a draw on Day Five. This pitch has frankly been terrible and deserves a poor rating from the ICC much as the MCG pitch did five years ago. To offer up a pitch like this after 24 years in cricket exile is very poor from Pakistan. Hopefully, the pitch at Karachi will offer something more for the bowlers.

Steve Smith spoke on the pitch after the day's play.

“There is nothing for the seamers that’s for sure, but the spinners have offered a little bit when you hit the right length," he commented.

“When you get it out into the rough there is a little bit there, I thought it would break up and turn a little more from the start.”

Play is set to get back underway at 3:45pm AEDT, 15 minutes early to make up for the lost four overs at the end of Day Four.