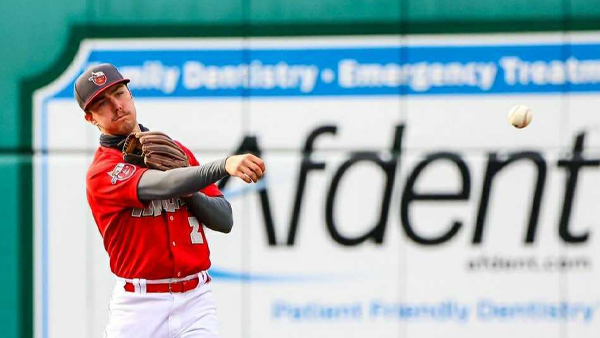 Aussies Abroad: Whitefield returns to Rocket City as Dale dominates with the bat

Jarryd Dale was a shining light with the bat for his team this week, while Jack O'Loughlin and Liam Hendriks' pitching sees them appear within the top leaders in certain stats.

Aussies Abroad: Whitefield returns to Rocket City as Dale dominates with the bat

Jarryd Dale was a shining light with the bat for his team this week, while Jack O'Loughlin and Liam Hendriks' pitching sees them appear within the top leaders in certain stats.

Victorian Liam Spence appeared in two games for the Myrtle Beach Pelicans, the Chicago Cubs' Low A affiliate, the team playing away to the Columbia Fireflies at Segra Park.

On May 18, in a 13-2 win, Spence came into the game as a pinch-hitter at the top of the ninth in a one-out situation with Juan Mora at first base. Spence earned a base on balls to get on base, advancing to second base on a wild pitch, advancing to third base on another base on balls, and scoring on a two-out bases-loaded walk to Jacob Wetzel.

Spence returned to the starting lineup on May 20, a game which ended in a 5-4 win to the Pelicans, though he went zero for three before being substituted out of the game for pinch-hitter Felix Stevens at the top of the ninth inning, who stayed in the game for the bottom half of the frame.

Liam Spence's statistics for the 2022 Minor League Baseball season (to May 22).

Victorian Jarryd Dale appeared in all six games of the San Diego Padres' High A affiliate, the Fort Wayne TinCaps' home series at Parkview Field against the West Michigan Whitecaps, posting six hits and four runs throughout the past week.

In his first outing of the week, in the series opener on May 17, a 5-4 win, Dale went two for three with an RBI and a run and two bases on balls. Dale first hit a single to third base at the bottom of the first inning which saw Corey Rosier score, as he recorded his second single at the bottom of the fifth inning though as forced out at second base on a double play.

Dale earned a seventh-inning base on balls, to which he was able to score on an Angel Solante single into left field after having advanced to second base on a Brandon Valenzuela base on balls. Dale was also walked in the eighth inning and, despite stealing second base, couldn't advance any further as the inning ended.

In a 9-0 loss on May 18, Dale went zero for three, though he bounced back in the 4-2 loss on May 19, going two for four with two runs. In this game, Dale hit a single into left field in the bottom of the fourth inning, advancing a base on a Valenzuela walk before scoring ahead of the final out being called. He hit a lead-off single into right field to begin the bottom of the sixth inning, advancing to second base via a Valenzuela walk and scoring on an Olivier Basabe fielder's choice hit.

Dale went one for three in the 10-5 win on May 20, posting a run, while also receiving two bases on balls. Dale was walked in the second inning, heading to third base on a Valenzuela double into right field, and scoring on a wild pitch.

He hit a two-out triple on a pop-up to second base in the bottom of the sixth inning. However, the final out was recorded before he could score again as his night ended with an eighth-inning walk, stranded on third as the inning ended.

Dale went zero for three in a 1-0 loss on May 21, though he did get walked in the eighth inning. He ended his week with a one for three-game on May 22, an 8-0 loss, getting hit by a pitch in the first inning, and stealing second base, but staying there as the inning ended, otherwise hit a two-out single into centrefield in the third inning before the final out was recorded.

Jarryd Dale's statistics for the 2022 Minor League Baseball season (to May 22).

South Australian Jack O'Loughlin appeared in two games across the past week for the West Michigan Whitecaps, the High A affiliate of the Detroit Tigers, pitching a total of 3.1 innings, giving up a combined one hit and one (unearned) run with three strikeouts in an away series to the Fort Wayne TinCaps at Parkview Field.

The first game of the week O'Loughlin played was on May 19, a 4-2 win where he came in for 1.1 innings of relief, replacing starting pitcher Jordan Marks at the bottom of the fifth inning. He had the first two batters groundout and flyout in succession before finding two runners on base via an error and a base on balls, but struck out the final batter to end the inning.

At the bottom of the sixth inning, he gave up a first-pitch lead-off single to fellow Australian Jarryd Dale, followed by a base on balls, before two fielder's choice plays, the latter of which resulted in the first out of the innings, although O'Loughlin was replaced by Jared Tobey after that point.

O'Loughlin's next outing was on May 22 in an 8-0 win, again coming on as the first relief pitcher, entering the game at the bottom of the sixth inning to replace Ty Madden. He again came up against Dale, though got him to groundout, before delivering a strikeout and forcing a flyout to end the innings, with the seventh inning being another three-up, three-down dig with a strikeout, groundout, and flyout, as he was replaced by Ted Stuka at the bottom of the eighth inning.

At the conclusion of the week, O'Loughlin posts the third-lowest batting average against all Detroit Tigers Minor League Baseball pitchers (first at the West Michigan Whitecaps) with .165.

Jack O'Loughlin's statistics for the 2022 Minor League Baseball season (to May 22).

West Australian Ulrich Bojarski appeared in two games for the West Michigan Whitecaps, the High A affiliate of the Detroit Tigers, in an away series to the Fort Wayne TinCaps at Parkview Field.

In his first appearance of the week on May 19, Bojarski went one for four in a 4-2 victory, blasting a lead-off solo home run over the fence in left centrefield at the top of the third for the first run of the ballgame.

Bojarski went zero for two in a 10-5 loss on May 20 before he was substituted at the bottom of the fourth innings by Trei Cruz.

*Statistics include each level Bojarski has played MiLB in 2022.

West Australian Alex Hall appeared in one game for Milwaukee Brewers' High A affiliate, the Wisconsin Timber Rattlers, in a home series at Fox Cities Stadium against the South Bend Cubs.

In the May 19 fixture, which resulted in a 3-2 loss, Hall went zero for three at the plate, although he drove in the first run of the game when he hit a sacrifice fly to centrefield, which scored Tristan Peters from third base.

Alex Hall's statistics for the 2022 Minor League Baseball season (to May 22).

AUSSIES ABROAD: HITTERS COME UP BIG AS WHITEFIELD EARNED A SECOND SHOT AT THE MAJORS

Queenslander Aaron Whitefield returned to Alabama to suit up in three games for the Rocket City Trash Pandas, the Double A affiliate of the Los Angeles Angels after he passed through waivers unclaimed and had been outrighted back to the Trash Pandas after a week-long stint in the MLB when he contract was selected by the Angels.

Playing away to the Birmingham Barons at Regions Field, Whitefield's return game at Rocket City was in a 16-4 loss on May 19. However, Whitefield went one for five at the plate, with a ninth-inning single into left field, continuing his franchise-record hitting streak, now up to 17 games.

In a 5-3 win on May 21, Whitefield wasn't included in the starting lineup but entered the game as a pinch-runner for Kevin Maitan at the top of the ninth, although he was forced out at the second base. Whitefield didn't remain in the game past that point as Ryan Aguilar replaced him in the lineup for the bottom of the ninth inning.

Aaron Whitefield's statistics for the 2022 Minor League Baseball season (to May 8).

West Australian Robbie Glendinning appeared in five games this week for the Northwest Arkansas Naturals, the Double A affiliate of the Kansas City Royals, as the team played an away series to the Arkansas Travelers at Dickey-Stephens Park.

On May 17, in a 7-6 extra-innings loss, Glendinning went one for five with a two-out RBI double into centrefield that scored John Rave. His next two appearances, in a 5-4 loss on May 18 and a 5-0 loss on May 19 yielded zero for three and zero for four games, respectively, although in the former, he earned a base on balls but was substituted out for pinch-runner Ryan Grotjohn.

On May 21, in a rain-affected 11-4 win, Glendinning went two for four with one run and four RBIs. At the top of the second innings, Glendinning became the second out as a result of a sacrifice fly into left field that scored Nate Eaton.

Glendinning ended the week with a zero for four-game on May 22, although he reached base as a result of a throwing error to lead off the second innings, scoring on a two-out Gavin Stupienski double into left field in a 10-5 victory.

Robbie Glendinning's statistics for the 2022 Minor League Baseball season (to May 22).

Liam Hendriks appeared in four games for the Chicago White Sox across the past week, claiming a save in each game - for a total of 13 on the season - where he pitched one inning in each opportunity on the mound.

On May 16, in a 5-3 extra-innings win against the Kansas City Royals, away at Kauffman Stadium, Hendriks entered the game at the bottom of the 10th inning, replacing Ryan Burr. After the White Sox had scored two runs in the top half, Hendriks delivered three consecutive swinging strikeouts to Michael Taylor, Nicky Lopez, and Kyle Isbel to end the game.

The next day, on May 17, in a 3-0 win against the Royals, Hendriks replaced Jose Ruiz at the bottom of the ninth inning, and while he gave up a lead-off single, he saw the next three batters pop out, strikeout, and groundout to close out the game.

On May 19, in a 7-4 win against the Royals, Hendriks entered the game at the bottom of the ninth inning, replacing Kendall Graveman. With Chicago holding a three-run lead, Hendriks gave up two singles within the first three batters (with a Ryan O'Hearn strikeout in between), though got out of the jam, forcing a groundout and a flyout to end the game.

On May 22, in a 3-1 away win against the New York Yankees at Yankee Stadium, Hendriks again replaced Graveman at the bottom of the ninth inning, managing to hold the two-run lead with an Isiah Kiner-Falefa groundout to start the dig before delivering back-to-back swinging strikeouts to Gleyber Torres and Jose Trevino.

Liam Hendriks, with his 13th save of the season, becomes tied with Bobby Jenks in 2007 with the second-most saves through the first 40 games of the season in White Sox history, a record held equally by Bobby Thigpen (1990) and Addison Reed (2013) with 14 saves in the same time period. Hendriks is currently fourth for saves in the MLB in 2022.

Liam Hendriks' statistics for the 2022 Major League Baseball season (to May 22).