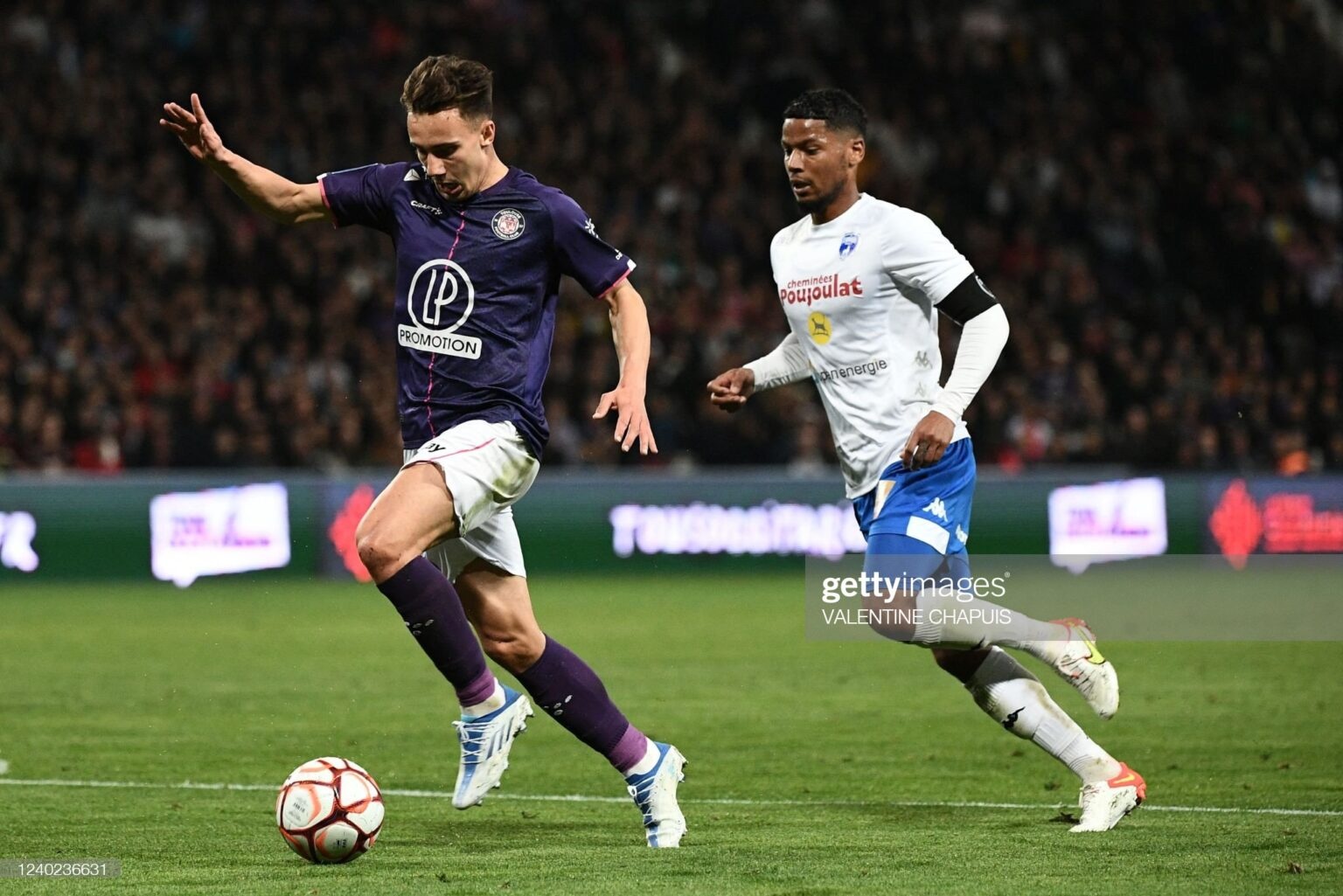 From Riley McGree getting on the scoresheet for the first-ever time at Middlesbrough to Denis Genreau and his Toulouse side claiming promotion into Ligue 1, let's take a look at our Aussies Abroad.

From Riley McGree getting on the scoresheet for the first-ever time at Middlesbrough to Denis Genreau and his Toulouse side claiming promotion into Ligue 1, let's take a look at our Aussies Abroad.

It’s that time of the week again. The time when we cast our eyes to the continent of Europe to see how our Socceroos and Socceroo hopefuls are playing on the continent where the game was born.

From Riley McGree getting on the scoresheet for the first-ever time at Middlesbrough to Denis Genreau and his Toulouse side claiming promotion into Ligue 1, we have it all covered right here. So let’s get into it.

Ajdin Hrustic played around 25 minutes coming off the bench for Eintracht Frankfurt on the weekend. The Aussie central midfielder came on to replace Frankfurt captain Sebastian Rode just after his side had taken a 2-1 lead against TSG Hoffenheim. Unfortunately, there was little the Aussie could do to prevent Hoffenheim from getting an equaliser. The match ended 2-2, leavingDie Adlerin ninth place in the Bundesliga table with only a handful of games left to play. The next stop for Frankfurt is London and a Europa League semi-final clash with West Ham United.

Jackson Irvine and his FC St Pauli side fell to a damaging defeat at the hands of promotion rivals Darmstadt 98. Irvine played 84 minutes and picked up a booking as his side couldn’t overcome two early goals fromDie Lillienin their 2-1 defeat.

The result leavesKiezkickeroutside of the promotion playoffs picture, with only a couple of games left in the season. Next weekend’s game against FC Nuremberg becomes a must-win fixture for Irvine and his teammates.

Riley McGree put his injury issues firmly behind him as he netted his first goal forThe Boroafter his January move to the club.

The 23-year-old played the full 90 minutes for the second fixture in a row as his side faced off against the Welsh club Swansea. Unfortunately for McGree and his teammates, his strike was cancelled out just a couple of minutes later and the match ended as a 1-1 draw. It leaves Middlesbrough’s playoff hopes dangling by a thread. It will require near perfection forThe Borofor the rest of the season if they are to qualify for the Championship Playoffs from here.

Last week we reported that Sheffield Wednesday was sweating on the fitness of Massimo Luongo for their clash with Crewe Alexandra. The Aussie played thirty minutes forThe Owlsbut did not have any significant impact on the game besides picking up a yellow card in the 1-0 victory.

Massimo found himself back in the starting XI for the crunch clash against Wycombe Wanderers over the weekend. He was disappointing in the midfield as Wycombe bullied his side into submission in a 1-0 defeat. The defeat saw Wednesday’s already slim hopes of auto-promotion disappear, and with two games remaining, they are outside of the playoff spots.

AUSSIES ABROAD: BASEBALL BEGINS AS MLB AND MILB SEASONS FINALLY UP AND RUNNING

Our next stop is Scotland, where we have a couple of Aussies involved in the Championship phase of the Scottish top tier.

Tom Rogic shook off his Cup heartbreak from last weekend and played the final 25 minutes as Celtic picked up a routine 2-0 victory over Ross County. The match was over as a contest by the time the Aussie came on in central midfield. Rogic made sure that Celtic didn’t let their two-goal advantage slip. The Bhoys maintained their 6-point lead over fierce rival Rangers at the summit of the Scottish Premiership.

22-year-old right-sided utility player Nat Atkinson played the full 90 minutes for Hearts in the Championship phase as they scored a 3-2 victory over Dundee United. The result put a dent in Dundee United’s European hopes for next season. Atkinson was anonymous playing at right midfield and will be slightly disappointed with his performance, despite the result.

Hearts named fellow Aussie Cameron Devlin on the bench but didn’t make it onto the pitch forThe Jam Tarts.

Over in Turley, left-back Aziz Behich wore the captains’ armband for Giresunspor. They fell to their first defeat this month, going down 2-1 toFatih Karagümrük. Despite his side having more of the ball, the better looks at the goal, and finishing the match with an extra player,Çotanaklarjust couldn’t find an equaliser, let alone get their noses in front.

The result leaves Behich’s side in 16th place in the Turkish Super Lig standings. That’s just one spot above the relegation positions. They are ten points clear with just 4 matches to play, so Giresunspor is assured of top-tier football next season.

Awer Mabil earned some minutes off the bench as Kasımpaşa picked up a 3-0 victory over Turkish giants Besiktas. The result leaves Kasımpaşa with a genuine chance to achieve a top-half finish. Kasımpaşa sits in eleventh spot, only two points away from the first page of the Turkish Super Lig standings.

AUSSIES ABROAD: THE JOY AND DESPAIR OF CUP FOOTBALL

MATILDAS SQUAD ALL ABOUT LOOKING FORWARD TO WORLD CUP 2023

The champagne corks were flying in France as Toulouse picked up a victory that ensured their return to the top flight of French football. A 2-0 victory over Chamois Niortais guaranteed promotion forLes Violets.It gives them an eight-point lead over second-placed Ajaccio. And, crucially, an eleven-point gap to third-placed Auxerre with just three fixtures remaining.

Denis Genreau came on for the last thirty minutes, replacing the club captain, Brecht Dejaegere in the 62nd minute. The Aussie has had a successful first season in France since moving from Macarthur FC. He has made 32 appearances out of a possible 35 so far in this campaign. Genreau now has Ligue 1 football to look forward to next year.

Young Aussie left-back Joel King just can’t seem to make it off the bench for Odense Boldklub. He has warmed the pine for the last three fixtures running. His side has picked 7 of the last nine points available after a 2-1 victory over Aarhus GF. Odense will hope to continue that form with just four matches of the league season remaining.

Our final pit-stop is fast becoming one of my favourite players to check on. That is Gianni Stensness. The Viking FK centre back played the full 90 minutes as his side kept a clean sheet in a 2-0 victory over FK Bodø/Glimt. The result sees Stensness and his side take second place in the Norwegian Eliteserien after four match days.