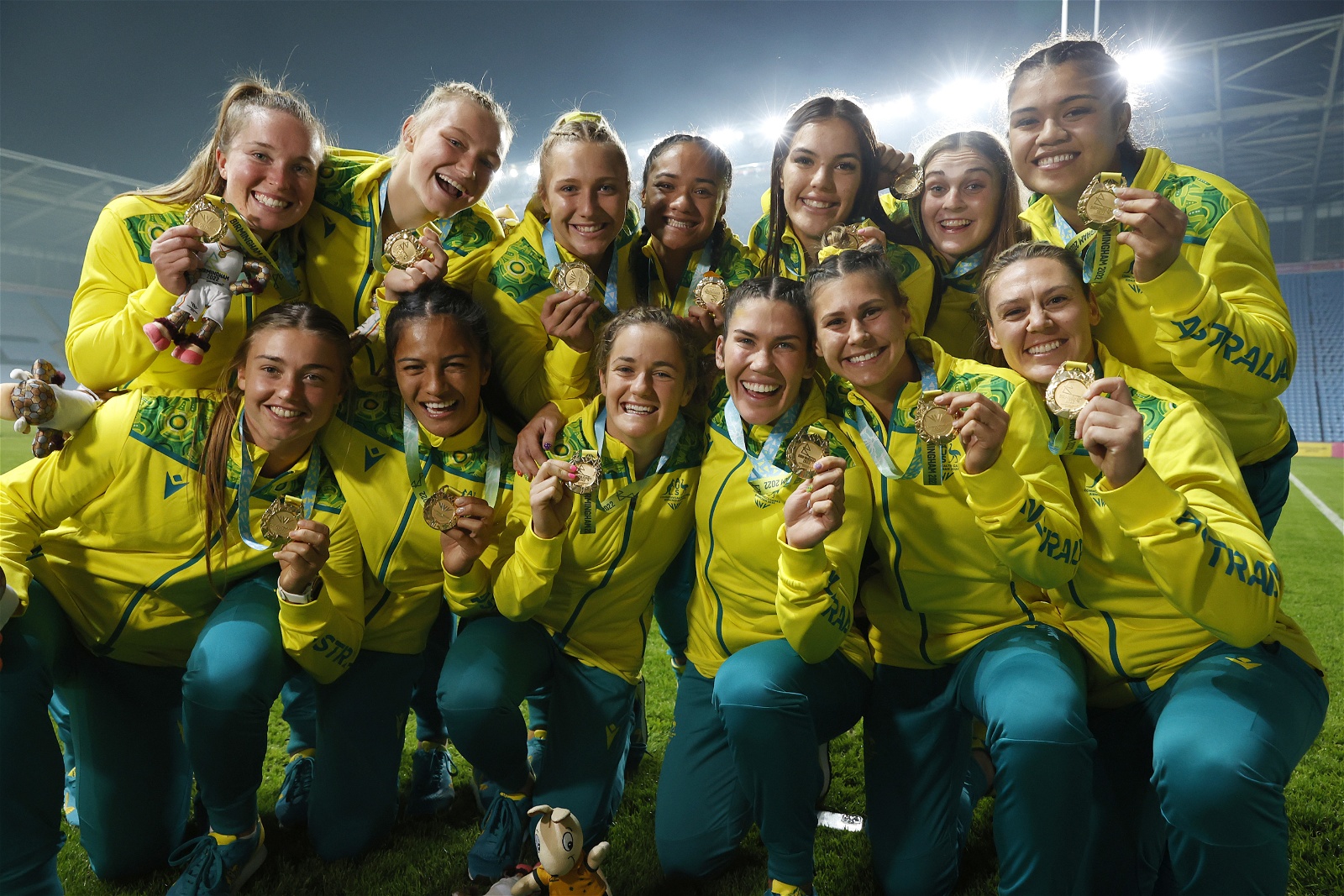 Emma McKeon won her 11th title, the 4x200 team set a new record, Georgia Goodwin won the all around and the rugby 7s women fired up on a golden day for Australia.

Emma McKeon won her 11th title, the 4x200 team set a new record, Georgia Goodwin won the all around and the rugby 7s women fired up on a golden day for Australia.

Australia’s medal tally increased by 22 on Day Three in Birmingham, as Emma McKeon became the most decorated Commonwealth Games athlete, a triathlon event debuted and the women’s rugby 7s were on fire against Fiji.

McKeon magic and other medals in the pool

Emma McKeon took gold in the 50m freestyle final to become the most successful Commonwealth Games athlete of all time.

It was a clean sweep on the podium, with Meg Harris and Shayna Jack claiming silver and bronze, respectively.

Kaylee McKeown was back in the pool, winning gold in the 100m backstroke and breaking a Commonwealth Games record as well. She was challenged by Canadian Kylie Masse, who was the record holder from Gold Coast 2018, but the Australian came home strong and got the job done.

Also on the podium, alongside Stubblety-Cook, was Sam Williamson who took home bronze in the 100m breaststroke. It was an incredibly tight finish in this race.

Blake Cochran finished with bronze in the 100m breaststroke SB8, in his final Commonwealth Games.

After missing out in Tokyo and the recent World Championships, Australia got its selection right with the quartet of Madi Wilson, Kiah Melverton, Mollie O’Callaghan and Ariarne Titmus powering to gold, in World Record time, in the 4x200m freestyle relay.

Wilson swam first, with Australia just behind Canada as Melverton dived in for her leg. She took the lead and then O’Callaghan extended it further, and with one leg to go, Titmus was in position to go after the record-breaking time.

The Australians were just 1.44 seconds off the pace when Titmus started her 200m. She flew through the pool, anchoring the team to victory with an insanely fast split of 1:52.82 seconds.

It was a much happier story for Australia than four years ago, when the side was beaten by New Zealand in extra time in the gold medal match. This time round, the women’s rugby 7s team claimed Commonwealth Games gold, defeating Fiji 22-12.

Revenge was sweet for Australia, who could have fallen away at their loss to Fiji in their pool game, 19-12.

The Aussies were dominant in the final, leading 17-0 at half-time to set up the win. Faith Nathan and Madison Ashby scored in the opening half, while Madison Levi scored her 10th try of the tournament to open the second and put Australian in a commanding position.

After losing to South Africa in the semi-final, 12-24, the men’s team also fell short of New Zealand in the bronze medal play-off, 12-26. It was not the way the team wanted to finish the weekend, but the Aussie 7s will no doubt celebrate a successful weekend nonetheless.

An emotional Georgia Goodwin has won gold in the artistic gymnastics women’s all around, finishing 0.550 points ahead of England’s Ondine Achampong, with Canada’s Emma Spence rounding out the podium.

In the final rotation, Goodwin moved into first place with a score of 12.950 and was guaranteed a medal, holding onto that gold position through the final two competitors.

Emily Whitehead competed impressively to finish 12th, with a score of 47.650.

A special mention to the best dressed on Day Three, men’s all around finalist Clay Mason Stephens. Who wore a cork hat to be introduced for the all around final and was seen sporting the hat on the sidelines throughout the competition.

After three knee reconstructions, his performance in the all around earned him 11th place. Unfortunately, rising gymnast Jesse Moore was forced to withdraw from the competition due to injury. He appeared to be struggling with a shoulder injury on the rings and did not finish the second half of the final.

King spins Australia to the win

Australia continued its winning ways in the cricket T20, with the team securing a semi-final spot with a comprehensive win over Barbados.

While it was all going Australia’s way, Alana King was denied a hat-trick and her first international five-wicket haul at the normally safe hands of skipper Meg Lanning.

Lanning put down a simple chance at slip, but the leg-spinner still finished with 4-8 from her four overs, as the team bowled out Barbados for 64.

There was no mucking around from Lanning in the chase, as she belted her way to 36 not-out, from 21 deliveries. Beth Mooney was stumped in the second over, and Alyssa Healy was a little slow out of the blocks, but the pair of Healy and Lanning sealed the win in just into the ninth over.

The Sri Lankan pair were no match for the Australian’s, who won comfortably despite waiting around until Day Three for their first match of the event. There is now another break before meeting next opponent Trinidad and Tobago on Day Five.

Australia continued its success at the velodrome, in what was a scary day at the track. During a heat of the men’s scratch race, English rider Matt Walls was catapulted over the barrier and into the crowd, in a crash that sent Walls and Isle of Man’s Matt Bostock to hospital and saw two spectators treated for injuries at the Lee Valley VeloPark.

Following a suspension of racing at the velodrome, cyclists returned to the track and Australia’s gold rush continued with four gold medals, and a bronze.

Kristina Clonan finished top in the 500m time trial, beating Canada’s Olympic champion Kelsey Mitchell as the last racer to go round the track. Clonan also took back the Commonwealth Games record for Australia with a time of 33.234, after the previous time set by Anna Meares’ was broken by Mitchell during the day’s racing.

Georgia Baker won the last four sprints to take out the 25km Point Race, with 55 points and almost 20 ahead of the silver medallist.

Jess Gallagher and Caitlin Ward doubled their gold medal tally in the Tandem B 1000m time trial, with a personal best time.

Gold was also won by Matt Richardson, his second for the Games, beating Trinidad and Tobago’s Nicholas Paul in the men’s sprint.

In the bronze medal race for this event, Australia’s Matthew Glaetzer originally finished first, but after a long deliberation he was relegated to fourth and the medal being awarded to Scotland’s Jack Carlin.

A bronze was added to Australia’s tally, though, with Beau Wootton and pilot Luke Zaccaria finishing third in the tandem B 1000m time trial.

For the first time at the Commonwealth Games, vision impaired triathletes hit the course and Australia stood on the podium in the men’s event.

Sam Harding, with guide Luke Harvey took home silver, while Jonathon Goerlach was up there too, winning bronze with guide David Mainwaring.

Kookaburras and Hockeyroos in fine form during pool games

On Sunday morning in Birmingham, the Kookaburras opened their campaign, dominating their pool game against Scotland for a 12-0 victory.

It was a perfect start for the men, who assert themselves among the contenders with such a comprehensive job.

The Hockeyroos were also strong once again in their second pool game, with a 5-0 win over South Africa.

Penny Squibb scored a pair of goals, while Stephanie Kershaw, Renee Taylor and 100 gamer Kaitlin Nobbs all converted to contribute to the win.

With two wins on the board, Australia sits second in Pool B behind New Zealand, who are in front by goal differential having scored 17 goals to Australia’s 13 in the opening two matches.

That contest between Australia and New Zealand looms as the big test for the Hockeyroos, to be played on Tuesday morning (Tuesday evening 6:00pm AEST).

Peters defeated Sumit of India in a unanimous points decision for his spot in the quarters.

Nine boxers are still a chance for medals over the coming days in Birmingham.