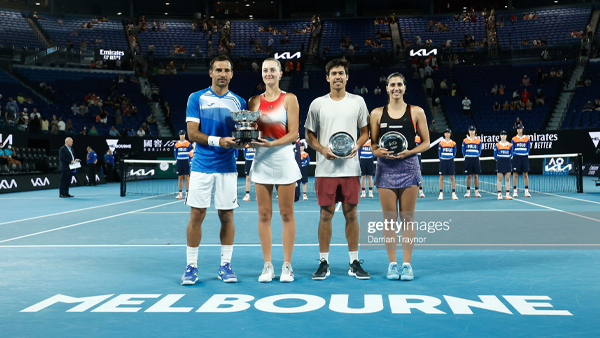 Kristina Mladenovic and Ivan Dodig were too strong for Australian pair Jaimee Fourlis and Jason Kubler, winning the mixed doubles final in straight sets at the Australian Open.

Kristina Mladenovic and Ivan Dodig were too strong for Australian pair Jaimee Fourlis and Jason Kubler, winning the mixed doubles final in straight sets at the Australian Open.

In the mixed doubles final at the 2022 Australian Open, the pairing of France's Kristina Mladenovic and Croatia's Ivan Dodigwon the Championship with a straight sets win over Australian duo Jaimee Fourlis and Jason Kubler.

This was also the first time Fourlis and Kubler were participating in mixed doubles together after each have played women's and men's doubles in their respective circuits across the past few years.

Dodig got the final underway, serving the first game as he and Mladenovic got out to a 40-0 lead, forcing an error for the first point, and winners for the next two.

Despite a double fault putting the Australians on the board, they then errored, to hand the set to their opponents, however, evened the set at one game all in the following service game.

Fourlis and Kubler got the break in the third game and although Mladenovic and Dodig got to set point, with a forehand winner, the Australians claimed the game. Although, the break would come undone in the next game as it was time for the French/Croatian duo to break back.

Dodig was strong on his serve, as he and Mladenovic won four unanswered points to take the game, including hitting an ace, and otherwise forcing their opponents to hit long and wide outside of the court.

Kubler then served the sixth game of the set, and starting off with an ace, only lost one point as the duo recorded the game-winning forehand shot.

From there, Mladenovic and Dodig won the next three games to take the first set, including breaking the Fourlis serve in the eighth game without conceding a point to the Australians.

Dodig then served for the set, again starting with an ace and while the sides went back-and-forth with the score, eventually the French/Croatian pair got the final point and the set via an error from the Australians.

To begin the second set, each team gave up just one point each in their respective opening service games before Mladenovic and Dodig got the first break of the set when Fourlis double-faulted on deuce. The fourth game also went to deuce, however, with a successful forehand shot, they got a break back.

In the fifth game, with Kubler serving, he and Fourlis lost the first point but came back to win the next four points to take the set.

Dodig's serve was too much for the Australian pair in the sixth game though, the Croatian forcing errors, as well as hitting an ace, with four unanswered points helping win the game to even the set at three-all.

Mladenovic and Dodig got a crucial break in the seventh game, despite a small fightback from Fourlis and Kubler. Up 0-30, a crisp slice slot from Kubler saw the Australians win a point, and a weighted lob from Fourlis put the score at 30-all.

Dodig hit the net to have the Australians at set point, however, Dodig got the ball to catch the edge of Kubler's racquet and be hit out of court before Fourlis appeared disgruntled and frustrated as a long ball gave the game to their opponents.

The Australians started well in the next game, getting the first point but then lost the next four as Mladenovic held serve though the home pair weren't out of the match yet, winning the following game, giving up just one point in the process as Kubler served well.

It meant that the Croatian was going to be serving for the match, and, in what turned out to be a point-for-point game, trying to defend match point, the Australians looked for ways past the players on the other side of the net.

They would come undone by multiple Dodig winning smashes as errors hampered Fourlis and Kubler once more before a Mladenovic across-court shot sealed the Championship for her and her partner.

In the post-match ceremony, Jaimee Fourlis congratulated their opponents and her partner, while still soaking up the fanfare of the experience of playing at the tournament in the mixed doubles.

"First, we'd like to congratulate you guys (Mladenovic and Dodig) on an unbelievable tournament, you guys definitely played really well today so congrats," Fourlis said.

"Secondly, to Jason, it's been an absolute laugh this week, it's been so much fun. [I] didn't really know what to expect, to be honest, but hey, we made it this far and it's been pretty good."

"To everyone who came to watch our match today, we started on Court 15 in the sticks and we slowly made our way up to Rod Laver Arena, and playing a match at 1 am so we've been through everything and it's been so much fun. We even have our name on our towel, which is pretty cool!"

Jason Kubler shared his partner's sentiments about the crowd while touching on the unfortunate result of the loss.

"Thanks, everyone for coming out today, it's a shame we didn't get the win - it would have been a pretty cool story for us but far out, we had so much fun", Kubler said.

During the celebrations, Kristina Mladenovic spoke highly of the Australian pair and their performance is not just the final, but in their tournament as a whole reflected back on the conversations with her partner, and the Australian crowd.

"First of all, I really want to start with you guys (Fourlis and Kubler). I remember myself being stuck in the locker room, actually [being] late to my practice, watching your first round [match] where you saved multiple match points and well done for an amazing tournament. It was amazing watching you play and Jason, we played in the juniors together so it's nice to see you on [this] stage, congrats to you and your whole team," she said.

"My partner, you guys have no idea how many times we texted each other 'Let's play mixed' and finally, it happened so thank you for playing with me. I had an amazing time and what a way to finish our first time on the court together. Thanks for being an amazing person.

"I'm always looking forward to coming back to [the Australian Open] every year. Thank you so much to everyone for watching. It was special to us, playing against an Australian team - sorry for today, but you're a fantastic crowd with great spirit and I can't wait to be back."

Ivan Dodig took time to mention the hardships that people have had to endure throughout the past couple of years and how tennis can still bring out the best in people, whether it be players or spectators.

"Congrats guys (Fourlis and Kubler), it was great, with you playing amazing tennis. Most importantly, thank you guys (the crowd) for coming - we all know it is a difficult time. We all are struggling but it's amazing to play," he said.

"Last year, I played a final here, there was no crowd - this year, it is much better. You guys are great and we have to try to enjoy it and I am happy to come back here, back in Melbourne and Australia, we always have a great time.

"I'm also playing well, last year I won doubles, now mixed so it's great to come back here, even if you guys are in difficult times... but we all appreciate that you are coming and trying to enjoy as much as you can."