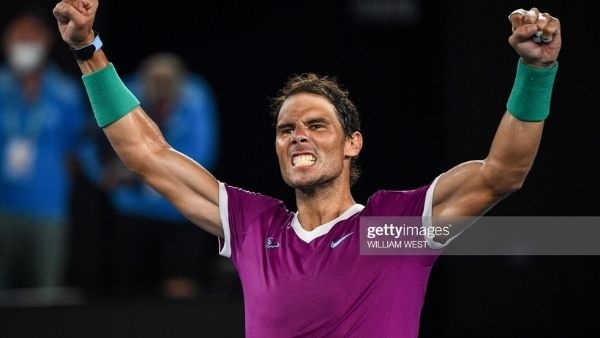 It was another big day in the Australian Open with two blockbuster Men's semi-finals taking place as well as the mixed doubles final.

It was another big day in the Australian Open with two blockbuster Men's semi-finals taking place as well as the mixed doubles final.

It was another blockbuster day of Australian Open action with Rafael Nadal and Daniil Medvedev set up to meet in what is sure to be a blockbuster final on Sunday night after both winning their respective semi-finals.

The Australian Mixed Doubles pairJaimee Fourlis and Jason Kublerfell short of claiming the title in the final against France’s Kristina Mladenovic and Croatia’s Ivan Dodig in straight sets.

The Australian pair came into the Australian Open as wildcards, so it was a massive effort to make it to the final.

Rafael Nadal to strong for Italian Berrettini, securing his spot in the final

Rafael Nadal has won a place in the 2022 Australian open after defeating Italian Matteo Berrettini in a four-set showdown. Nadal kicked off proceeding after Berrettini chose to receive first.

Which didn't work out in the Italian's favour with Nadal winning the first game of the match, with an unforced error from Berrettini allowing the Spaniard to go up 1-0 in the first set.

Nadal went up 3-0 in the first set, with unforced errors a killer for the Italian early on in the first set. Berrettini finally got on the board in the fourth game after winning the match point with an ace.

Although Nadal fired straight back with a forehand on the run allowing the Spaniard to extend his lead 4-1 in the first game.

There were injury concerns for Berrettini with the physio coming out during a change over but he didn't receive treatment.

Nadal claimed the first set 6-3 with the seventh seed starting to fire up, serving five aces during the opening set.

Nadal came out of the gates in the second game, claiming the first set after Nadal sealed it with a forehand shot.

It was a nail-biting third set with four break points taking place before Nadal eventually proved too strong, going up 3-0 in the second set.

Berrettini finally got on the board in the fifth game of the second set, after a forehand forced error from the 20-time Grand Slam champion.

Despite dropping another game Nadal remained in control of the second set, taking it out 6-2 and going 2-0 up in the match.

Although it was a cruisey opening two sets for Nadal, Berrettini came out firing in the third set.

It was Berrettini drawing the first blow in the third set after a forehand unforced error from Nadal in break point gave Berrettini his first game lead for the match.

It was also the first time that Berrettini was serving in the opening match once again proving how dangerous he is on the serve.

It was a swift response from Nadal and despite losing for a point on a double break was able to tie the set up 1-1.

Berrettini started to swing momentum his way going up in the third set 5-3, starting to add that pressure on Nadal after a forehand shot giving Berrettini a two-game lead.

Berrettini kept his chances alive claiming the third set, taking the match score to 3-1 sending the game into a fourth set.

Nadal didn’t let losing the 3rd set get to him, coming out in the 4th, winning the first game of the set despite being down 15-30 at one point.

Berrettini once again proved how strong he is on the serve tieing the set up 1-1.

Nadal got one step closer in winning the match after winning the eighth game taking his lead to 5-3, with an unforced error from Berrettini allowing the Spaniard to go two games up.

The sixth seed then stepped on the gas overpowering Berrettini in the final game with an unforced backhand error from the Italian sealing the match.

Daniil Medvedev sets up date with Nadal after beating Tsitipas

Daniil Medvedev has advanced to the Australian Open Men's final after defeating Stefanos Tsitsipas in a four-set thriller.

Tsitsipas kicked off proceedings which worked in his favour as he claimed the first game thanks to a forehand forced error from Medvedev.

The US Open champion was quick to level the score in the second game, where he dominated not letting Tsitsipas on the board for that game.

The first set was a tight one when Tsitsipas getting a game but then Medvedev would quickly level the score.

The ninth game was a close one with the game going to deuce four times before Tsitsipas claimed the game taking the score up to 5-4.

The first set went into a tiebreaker but it was the Russian that came away with the set after an unforced forehand error from Tsitsipas.

For the first time in the game Tsitsipas went up two sets ahead going 3-1. But Medvedev was quick to respond, shorting the game lead to just one game.

The change over wasn't without it's controversy with Medvedev accusing Tsitsipas of being coached from the sidelines with a heated conversations with the umpire taking place.

The Russian came out firing in the opening set, taking the first game which went into break point but Tsitsipas was quick to tie the scores in the third set.

The third set was similar to the first when every time Medvedev got a game ahead but Tsitsipas was right behind him, quickly matching the score.

Medvedev was one step closer to taking out the match after claiming the third set and going two sets up going into the fourth set.

Medvedev picked up where he left off in the fourth set taking out the first game forcing Tsitsipas into error.

The Russian looked to be in control in the fourth set, going up 4-1 after an ace to extend his lead to three games.

Medvedev took a step closer to advancing to the final after a great forehand shot going up 5-1 in the fourth set.

A backhander sealed the game for the Russian who will now face Rafael Nadal on Sunday Night.