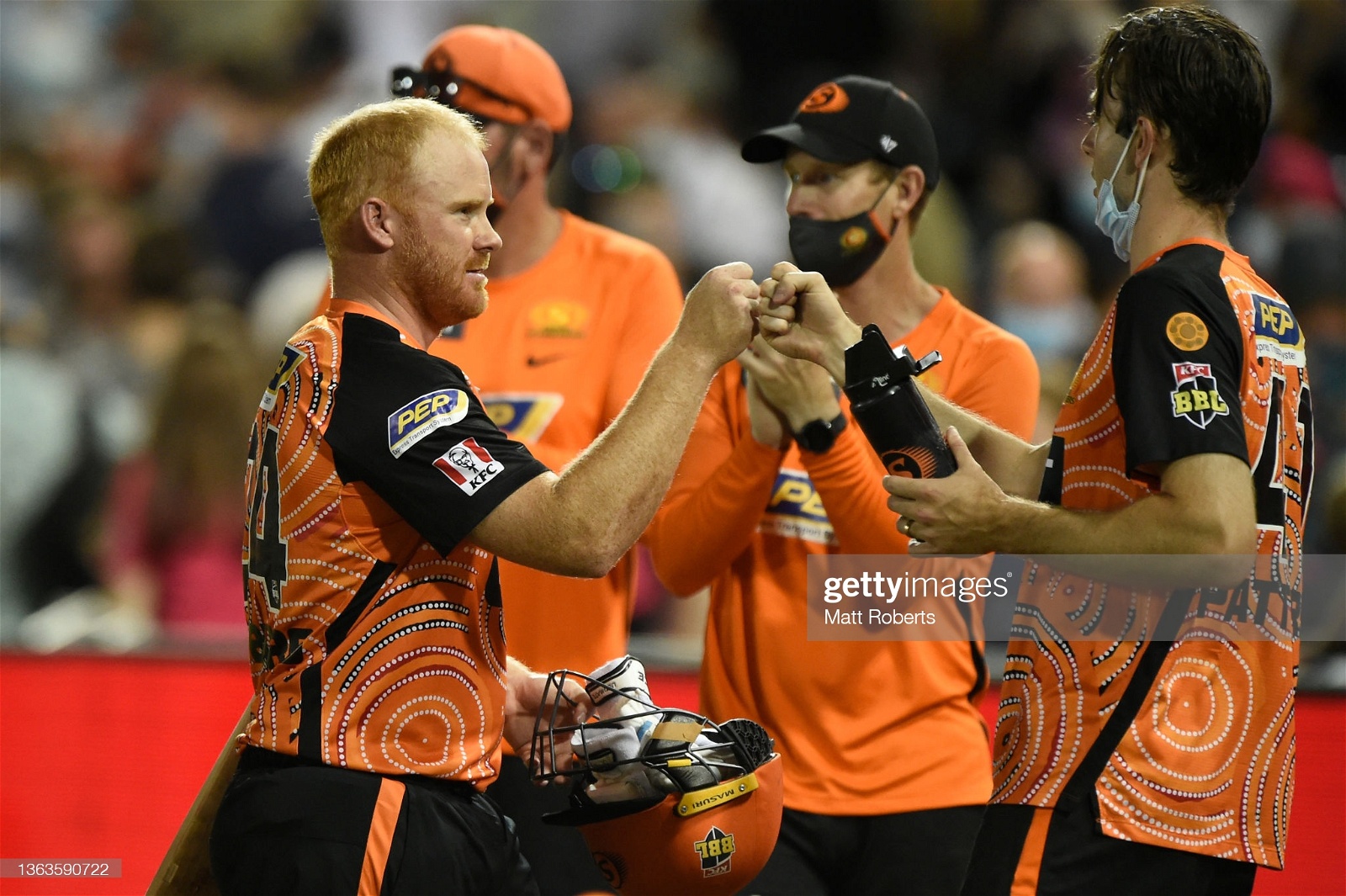 Ashton Turner and Ashton Agar lead the Scorchers to Victory

Ashton Turner and Ashton Agar lead the Scorchers to Victory

Perth came into this match at the top of the table, while Sydney aimed to stop a two-game losing streak, that had relegated them down to third place.

Both teams were without several players due to recent covid outbreaks.

The Scorchers were without Colin Munro and Jason Behrendoff due to covid protocol. Additionally, they had to play their first game after losing Tymal Mills, who returned to England ahead of international duties.

Sydney had to deal with the loss of its captain Moises Henriques, as well as bowlers Sean Abbott, and Steven O’Keefe.

The match started well for Sydney, with acting captain Daniel Hughes winning the toss and electing to bat.

Perth’s bowling attack then managed to restrict the target for the Bash Boost point to only 69 runs. At this point, Sydney had not found the boundary in 3 overs.

Sydney’s opening partnership of Josh Philippe and Justin Avendano showed promise, taking the Sixers to 0/33 off the powerplay.

The partnership continued before Ashton Agar had a breakthrough eighth over, taking the wicket of both openers, ending his over with Sydney 2-57.

Peter Hatzoglou struck next with the wicket of Jack Edwards for only eight runs.

With Sydney still struggling for runs, they took the Power Surge in the 15thover. However, Ashton Agar found himself involved in another wicket. This time he took a leaping catch off the bowling of Matthew Kelly, sending Daniel Hughes back to the sheds.

The final partnership of Dan Christian and Jordan Silk did their best to take back momentum for the Sixers. The two provided a quick 50 run partnership, to give their team a final score of 151 runs.

The Sixers struck early to gain momentum in the power play. Ben Dwarshius took two wickets in just the second over to put him on a hat trick.

By the end of the powerplay, Perth was forced onto the back foot at 2-22, losing the wickets of both Kurtis Patterson and Cameron Bancroft.

Laurie Evans and Ashton Turner showed a promising partnership. This, however, did not last long with a mistimed shot from Evans finding the hands of Jack Edwards to gift Sydney a wicket.

Here, however, is where Sydney’s fortunes turned, as the new partnership of Ashton Turner and Aaron Hardie proved to be what the Scorchers needed. While a few opportunities to stop them presented themselves, neither Jackson Bird nor Daniel Hughes was able to hold onto catches, giving Turner multiple chances to keep batting.

Turner used these chances to his advantage, scoring 69 runs off only 41 deliveries. He eventually fell to Jackson Bird, with his team in the driving seat to win.

While Hardie also fell, the damage had already been done, and the final partnership of Ashton Agar and Chris Sabburg scored the final few runs to take their team to victory.

Player of the match went to Ashton Turner for his efforts.

With this win, Perth continues to all but confirm a spot in the top two. Sydney on the other hand will be desperate to end this losing streak. If they are unable to do this, the third place becomes a possibility for the Hobart Hurricanes.