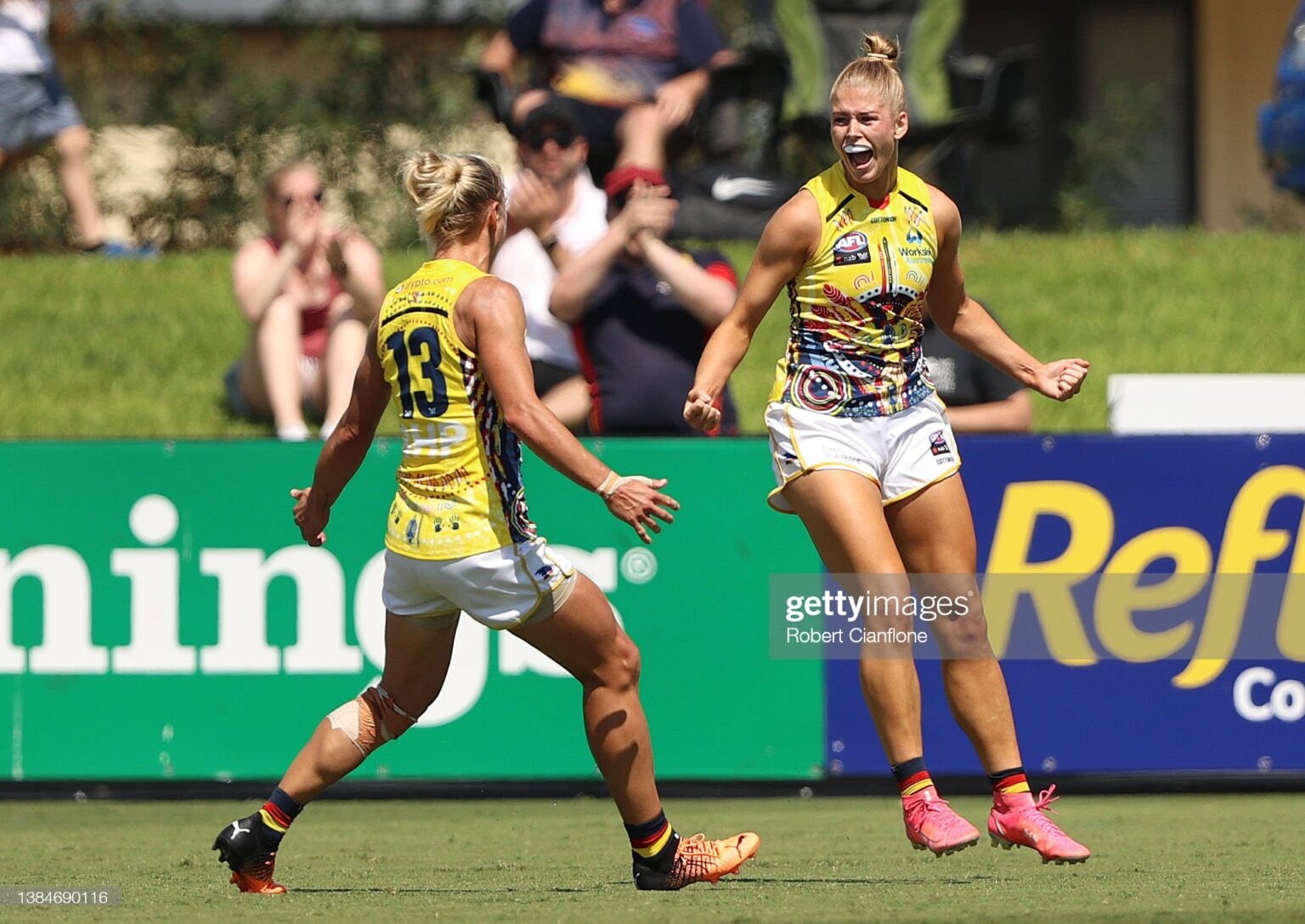 Ash Woodland kicked two goals to move to the top of the goal kicking standings, as her Adelaide Crows secured the minor premiership with a 39 point win over the St Kilda Saints.

Ash Woodland kicked two goals to move to the top of the goal kicking standings, as her Adelaide Crows secured the minor premiership with a 39 point win over the St Kilda Saints.

Ash Woodland kicked two goals to move to the top of the goal kicking standings in 2022, as her Adelaide Crows secured the minor premiership with a 39 point win over the St Kilda Saints.

The Crows were dominant against their lower ranked opponent, though the day was highlighted by Woodland moving into equal top and then outright taking the Leading Goalkicker award for 2022.

Woodland's season was set up by two bags of four in rounds one and two, as well as five two-goal games and only on two occasions did Woodland not score a goal - instead she had 10 and 11 disposals and laid numerous tackles, as she contested for her side.

She spoke toEdge of the Crowdafter the game about her achievement.

"As an individual I'm quite happy with how my season's been going. I've really worked on my craft and just my individual form of getting fitter and getting to every contest as I can, and putting that pressure on.

"I think just having that one or two focus[es], really helped me this year. And yeah, me kicking goals is just finishing off the hard work the team does on the day - happy to slot them through if that's all I have to do.

The Adelaide Crows have enjoyed their fair share of individual success already this season, with both Montana McKinnon and Teah Charlton nominated as Rising Stars, Ebony Marinoff reaching 50 career games, among other milestones.

This latest one, Woodland moving to the outright leading goal scorer, is another exciting accolade - the Crows celebrating them all with "the little things.

"So, I kicked my second goal and they all knew if I kicked that second goal, I was on top by myself. So just that celebrating and getting around one another.

"During the week, when they're Rising Star, we give them a Rising Star ball and we celebrate.

"We surprise them with cakes, anything to surprise them and get around them, because it is hard work and those accolades don't come all the time. So it's good to give them a little bit of a pump up during the season and to appreciate what hard work they've done for us."

St Kilda made two changes to its line-up with Renee Saulitis and Isabella Shannon coming into the side, Cat Phillips was managed and Nat Exon missed the final match of St Kilda's season through injury.

Adelaide had five changes to its side this weekend, with the big news that captain Chelsea Randall was back for a run before Finals. In addition to Randall's return, Eloise Jones returned after missing last week’s game due to injury, alongside Nikki Gore and Jasmyn Hewett.

Former Brisbane and West Coast forward, McKenzie Dowrick was named for her first game for the club, while first-round draftee Zoe Prowse was handed her debut.

Najwa Allen was out of the side through suspension, while Lisa Whiteley, Montana McKinnon, Abbie Ballard, Brooke Tonon, and Madison Newman were all omitted.

The Crows' goal-kicking woes continued to start their match-up with the Saints, scoring just three behinds in the opening term - including misses off the boot of Woodland and Danielle Ponter.

Saints captain Hannah Priest put her side in front with one straight kick, the Saints leading the Crows by three at the first change.

Kicking with the breeze in the second term, Woodland joined Tayla Harris and Cora Staunton at the top of the goalkicking table after kicking her first for the day. Gathering in the goal square, Woodland popped it on her boot for an easy major.

Erin Phillips was gifted a goal through a 50m penalty, and she made the Saints pay, slotting the set shot nicely and extending the Crows' margin over the home side.

The Crows moved even further ahead when Woodland kicked truly for her second of the day, and 19th for the year.

While the stunning season from the former Demon hopefully has two big performances left, it's been quite the year for Woodland, recognised for her dominance.

Caitlin Gould added to the Crows tally to open the second half, as the top of the table Crows continued to increase their percentage and maintain their place.

Jessica Martin hit back for the Saints, but a goal to Stevie-Lee Thompson late in the term extended the margin once again.

Danielle Ponter put through her first for the day to open the scoring in the final term, taking the ball out the back of the contest and getting a clean look at goals.

"It's really good [to get the win]. We knew St Kilda was going to come out tough - last game of the season, you always want to win on your last game season.

"So, we knew what we had to do to get the job done, so we're quite happy with our performance.

"We knew we just needed the win, so we wanted to come out, get the win, we wanted to play our footy and just move the ball really well.

"We wanted to hit up those kicks in the forward 50 and try to get some scoreboard pressure - we really worked on that today."

With just one loss to their name for the year, the Crows' finished as minor premiers for the second year in a row. When asked what makes this team different and so dominant again this season, Woodland said it could be put down to the mountain of work the side did ahead of the 2022 season.

"I think it's just what the girls put into their offseason programme, their preseason programme and just during the season. So, we work really hard and we make each other accountable.

"I think this preseason was a little bit different, I think we worked that little bit harder.

"We knew the competition was going to get so much better, so we knew we had to put in the extra and I think we just had a bigger preseason this year which has given us that good form to win games."

Randall's return was exciting for the team, and Woodland said it was pleasing that their skipper got through the whole game, given was happened on her previous return from a hamstring injury.

"We're so happy for her and so glad she got to play today and [got] through the whole game.

"She played her role today and we're just so happy that she finished the game and we got her back out on the park."

The team now has a fortnight to prepare for the preliminary finals weekend, a reward for a side that has put together an impressive 2022 home and away season, recording just one loss to the Western Bulldogs by a point.

"We'll just take it one step at a time. So tomorrow we'll have recovery, we'll just do what we normally do and we'll probably have a bigger session next week because we're not playing a game.

"We'll just take it as it goes, train like we normally do and train like we're going to play on the weekend and probably just have that bigger session on the Friday or Saturday morning, whenever Doc wants us to have it."

The Adelaide Crows have earned the right to move straight through to the preliminary finals, they will be watching next week's matches to learn of their opponent for the following weekend.