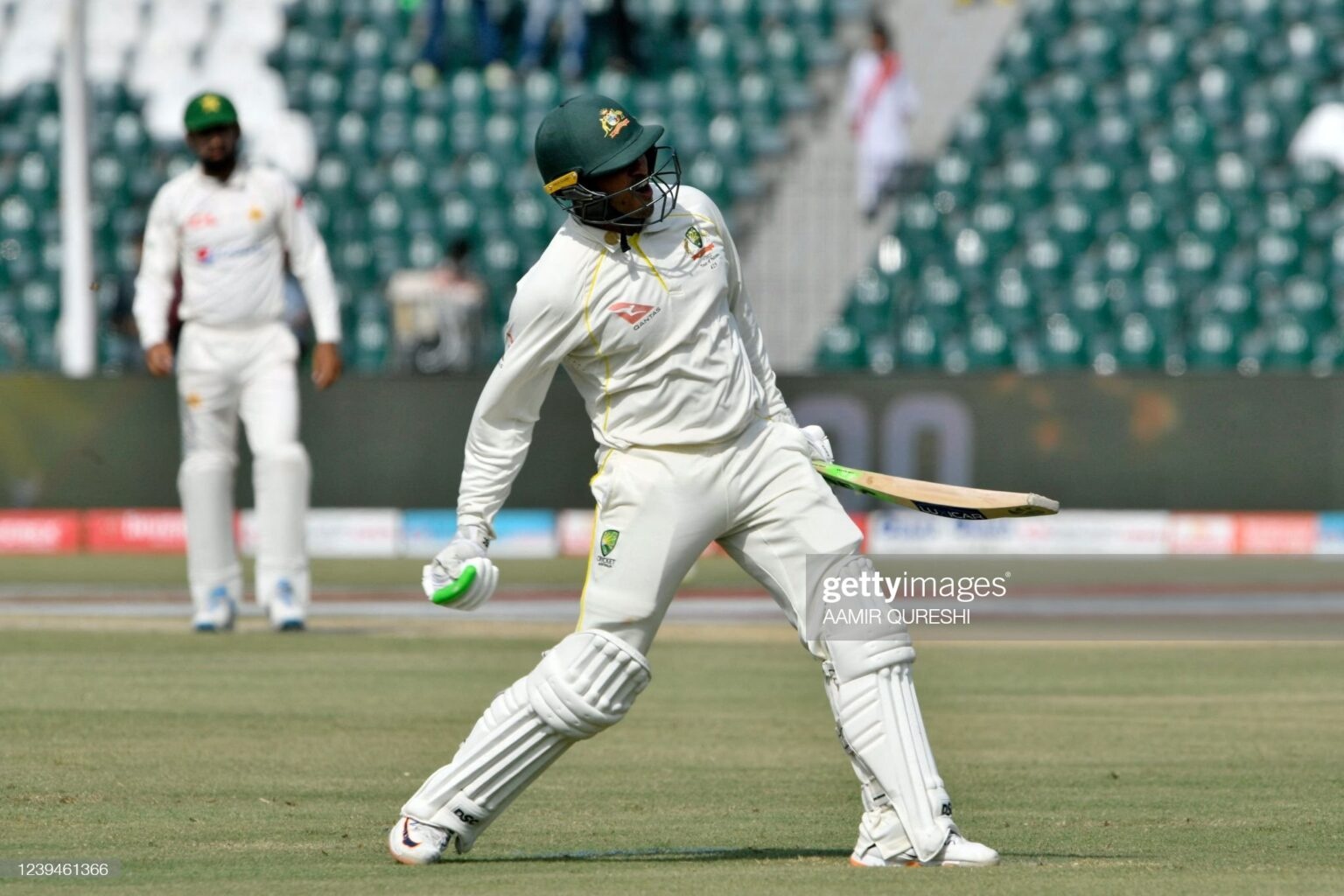 Another Usman Khawaja century in 2022 as Australia set up a game for day five with all four results still possible to decide the series.

Another Usman Khawaja century in 2022 as Australia set up a game for day five with all four results still possible to decide the series.

An enthralling day five between Australia and Pakistan has been set up after a brave Australian declaration by Australia’s captain Pat Cummins. Another Usman Khawaja century made sure Australia would still be in the game and in a commanding position ahead of day five.

Australia began the day on only eleven runs after batting just the three overs the night before. The plan was to score and score fast and for a long period that was clearly happening.

The Aussies opening pair of David Warner and Khawaja brought up the 50 in only 11.2 overs before pushing on to the lunch break only one down after David Warner had brought up his 50.

Khawaja has been immaculate in 2022 averaging well over 100 and now having hit four centuries since his return to the Australian team at the Sydney Test. It wasn’t a boundary heavy knock for Khawaja but what he did manage to do was negate the reverse swing of the Pakistan quicks.

He decided to attack the spinners, especially Nauman Ali who went for 5.50 per over from the 10 he bowled of the Aussie innings. The quick batting allowed Australia to put some serious pressure on Pakistan’s bowlers who only managed to break through just before the lunch break.

David Warner had to go against the bowling of Shaheen Afridi after a reverse swinging ball came in sharply to rip the off stump out of the ground. It was 51 to Warner who would’ve loved a century just to show that he still has what it takes at this level.

Marnus Labuschagne only had to face a couple of balls before lunch, but afterwards, he also took the attacking way as Australia looked towards a declaration.

In a partnership of 19 overs Khawaja and Labuschagne put on 75 runs in quick time, the sweep shot was the most important for both batters who looked to attack the spin of Pakistan.

Runs continued after the Labuschagne was dismissed sweeping into the deep and picking out the man in the deep, it was another start for Labuschagne, but he couldn’t go on with things getting out for only 36.

Steve Smith then continued the fast scoring but only lasted for 17 runs before edging behind a good reverse swinging ball. It was reviewed but to be honest it was a complete waste of a review once again by the Australians who have struggled with DRS in recent times.

It took only 169 for Usman Khawaja to bring up yet another Test century, he now goes past Dean Jones on the list for most runs by an Australian as well as for most centuries by an Australian batter. Khawaja’s Test average is now well over 47 putting him ahead of both Bill Lawry and his opening partner David Warner who has now dropped below 47.

His return to the side could turn out to be one of Australia’s greatest comeback tales in a years’ time. He will enjoy the spinning conditions of Sri Lanka before a home summer against South Africa and the West Indies, there is no reason he can’t go past 20 for career Test centuries.

Usman Khawaja reflected on his efforts after the day's play.

" You can never get too far ahead of yourself in cricket, two hundreds and a couple of 90s so I’m very grateful. We weren’t sure if we were going to come to Pakistan at some stage but were here and it’s been a great series, you can never predict these things."

The declaration didn’t come too much later as Pat Cummins had decided he had seen enough. The lead was 350 with just over an hour left in the day as well as all of tomorrow. The game was definitely in the balance with chances for both sides to win this match come tomorrow.

AUSTRALIA MISSES MORE MILESTONES AS PAKISTAN COMFORTABLY GETS TO STUMPS

The declaration would mean that there would be 27 overs left in the day for the Pakistan batters to get through. Unfortunately for the Aussies, nothing came for the Aussies apart from one chance in the final over of the day.

It was once again Steve Smith in the slips who has dropped an unbelievable number of catches in this series. It was a tough one for Smith, he would rarely catch something like that but it’s one that could change the tides of this match when the result is called tomorrow.

"As a fellow first slipper, it’s an odd one because wit the ball spinning away you rarely get beaten on the inside. It’s not easy out there and the ball is coming fast, and you have to stand close because if you play off the front foot the ball just doesn’t travel." Khawaja said reflecting on dropped catch.

Pakistan began the session batting awfully slowly against Pat Cummins and Mitchell Starc, but the acceleration came as the spinners came into the attack.

Once again Mitchell Swepson couldn’t find the correct line or length going for 23 in only five overs on what should be a spinning pitch. Tomorrow could either make him a hero or end his career if he can’t be effective on a day five spinning pitch.

Pakistan batted through the entire session without losing a wicket and putting on a good 73 runs. They currently sit 278 runs behind with 90 overs to go tomorrow.

We are in for a massive day of Test cricket tomorrow; the result could very well come down to if the Australian spinners get the ball turning big and if the Australia pace bowlers can find any reverse swing.

With Pakistan having a long batting tail Australia will only need a few breakthrough wickets but it’s clear that Pakistan also has the firepower to chase this total down if they choose to take that option.

Usman Khawaja spoke about the plans going into tomorrow.

"I’m not really too worried about Pakistan chasing the total, it’s a hard wicket to push the score forward.

"There is a lot of cracks in the wicket and plenty of rough on both sides, this wicket looks much harder than Karachi was, and if we do things right then we should be able to win this Test. This is what you want with Test cricket all options are still available on day five."