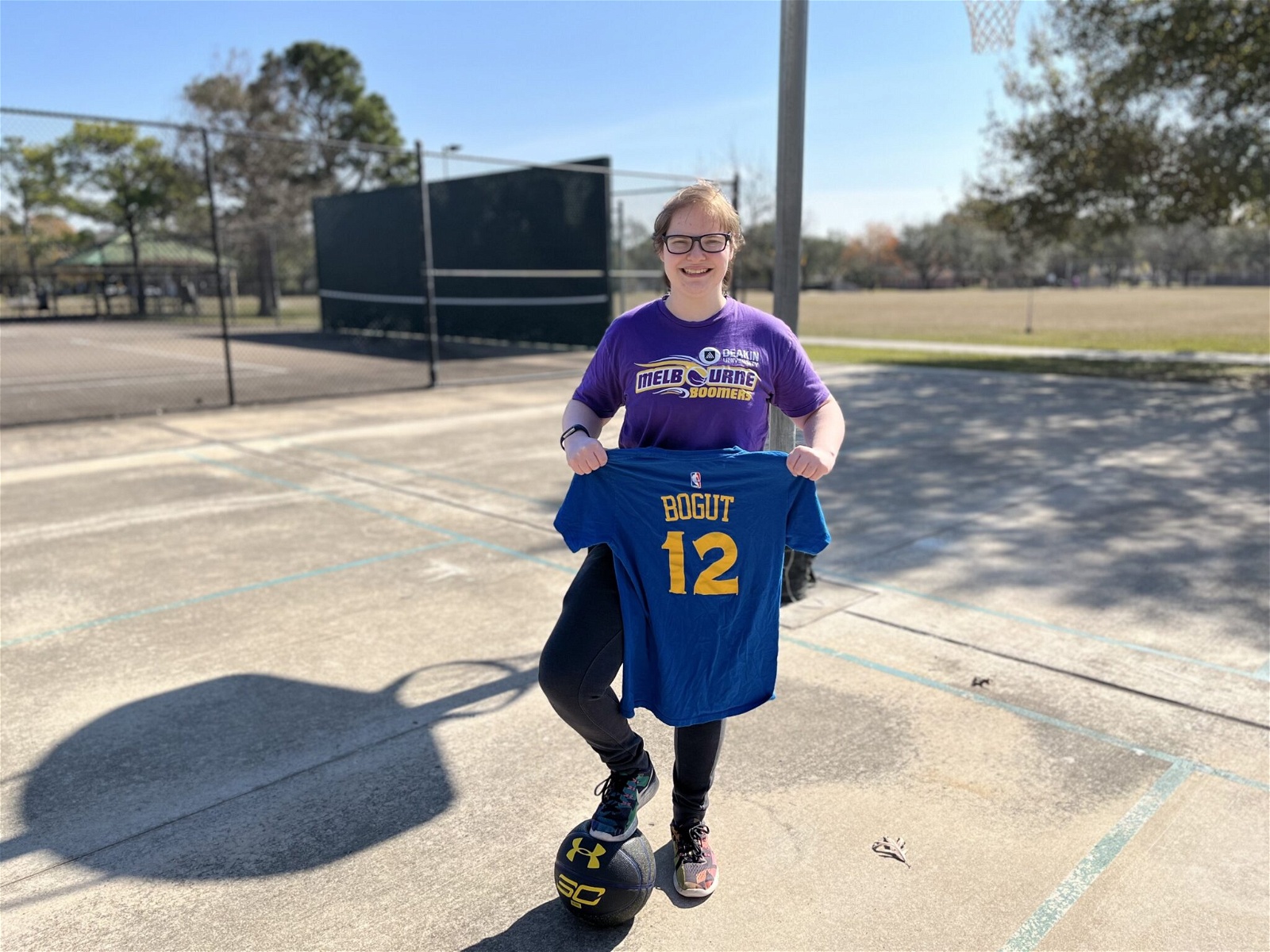 An American's Love for Australian Basketball

My path to basketball and sports fandom came at an extremely young age. Growing up in Houston, Texas, I'm surrounded by a community who're proud of their teams regardless of performance.

An American's Love for Australian Basketball

My path to basketball and sports fandom came at an extremely young age. Growing up in Houston, Texas, I'm surrounded by a community who're proud of their teams regardless of performance.

My path to basketball and sports fandom came at an extremely young age. Growing up in Houston, Texas, I'm surrounded by a community that's proud of their teams regardless of performance. At the end of the day, Houston sticks together through thick and thin.

I was born in November 1997, a little less than three months after the Houston Comets won the inaugural WNBA championship. The Comets would go on to win the next three championships for four in a row. I was obviously not alive for the first championship win and way too young to remember the next three.

What I do remember from years after when my 8th-grade Health teacher talked about the Comets and had a giant life-size cardboard cutout of Sheryl Swoopes in the room. Such was the amount of pride Houston's most successful basketball and arguably professional sports team brought to the City. The championship parades were electric and the City rallied around the Comets. The Comets' were forced to play their last game in 2008 on the campus of Texas State University in San Marcos, around 270 km or 168 miles east of NRG Arena due to Hurricane Ike devastating Houston. The team folded following the 2008 WNBA season, sending shockwaves throughout the whole league and Houstonians.

To many people's surprise

When they ask who my favourite NBA team is, I say the Golden State Warriors. Understandably, the assumption would be that I'm a Houston Rockets fan but not everyone's teams are their hometown heroes.

I have no connection to the Warriors and really can't give an explanation as to why they're my team. Maybe it was because their old logo was amazing and that attracted me as a little kid to like them? All I can explain is that I have no memory of being a fan of any other NBA team except for the Warriors. Sure, I still like and support the Rockets. I grew up going to their games. But the Warriors have had my heart since the very beginning.

To explain my Warriors fandom, here's a story of my first emotional break as a fan. I was in 8th grade when the Warriors announced they finalised a trade to send Monta Ellis to the Milwaukee Bucks for Andrew Bogut. I was sitting in the library of my middle school when I saw the "breaking news" articles come up. Emotions were rampant and I broke down in absolute tears because Ellis was one of my favourite players. I did not want to see him go.

What I would soon learn is that trades happen for a reason and that reason started the Warriors dynasty. Looking back on it, my feelings about this trade was not worth it. Especially because I got to witness the extreme success and learn more about Bogut.

The first game nationally broadcasted was all it took for me to absolutely fall in love with Bogut's play. The way he gave the Warriors a stable postman who was explosive on both ends of the court. His basketball IQ, ability to follow every shot, block the best players in the paint, and flashy passes immediately caught my eye. There was just something about Bogut that was the guaranteed missing piece of the Warriors up and coming talent puzzle.

The Olympics have always been an integral part of my life. Since I can remember, my mom would always have the Olympics on. It primarily switched between swimming and diving, gymnastics, and basketball but other sports would sprinkle into the viewing.

The first true exposure I ever had to Australian basketball was at the 2004 Olympics. I already knew who was on Team USA, the players' jersey numbers, style of play, and positions despite being six. I can't say I remember watching the Boomers play but I vividly remember the Opals. I'm not sure what caused a six-year-old to watch a women's basketball team that wasn't the United States in their free time but it happened.

Was it because I thought green and gold was a cool colour scheme? Was it because I recognised Lauren Jackson and Penny Taylor from the few WNBA games that were nationally televised? Definitely in the realm of possibilities.

The memory of the 2004 Opals team that's stuck with me for almost 18 years is the Gold Medal game against Team USA. Of course, I was rooting for the Americans. Nothing was going to change that aspect.

What I hoped for was a great game for my six-year-old self to watch and for the USA to get gold. What I did not expect was my engagement and willingness to learn everything about the Opals after the Olympics ended. The passion started early and continues to this day.

By the time the 2008, 2012, and 2016 Olympics rolled in, I was older and my knowledge of the Opals and Boomers were way more than anyone cared about. I knew more about the players, I watched every FIBA game possible, I became invested in studying and breaking down each players' style, and I was confident in my ability to mute the TV and call play-by-play.

Here's an example I often use to explain how I learned so much about sports so quick. During NFL season, my mom would come home to see me sitting on the wooden floor in the living room with the TV on mute broadcasting Houston Texans games. My dedication to knowing literally everything I could was evident from an extremely young age.

My growing passion was evident and became part of my everyday life. I'd spew out random facts and no one would care. Unless the facts were about Patty Mills or Bogut, due to the high level of NBA interest in my grade among the guys, no one was interested.

Little did I know that this vast knowledge and love for specifically Aussie basketball would shape my future in ways I would've never thought.

The WNBA and NCAA women's basketball

The WNBA and NCAA are the most integral part of my basketball life today. More and more Aussies were coming to America to play college ball. Wherever I looked, an Aussie women's basketball player I recognised due to watching an excessive amount of FIBA games appear on the court.

Michelle Timms set the stage for Aussie representation in the WNBA when the league started in 1997. Six players followed in 1998, with the likes of New York Liberty Head Coach Sandy Brondello and Tully Bevilaqua, to 2001 when Penny Taylor and Lauren Jackson, the greatest Australian basketball player of all time, heard their names in the draft.

I personally credit those five players as the reason why more and more Aussies are heading over to the WNBA. As of the 2021 draft, 37 Australians have played in the WNBA. There is no doubt that more will head on over when the 2022 draft commences in April.

I found absolutely no way to watch the WNBL. I could watch all the Euroleague games I wanted to but it wasn't on the top of my priority offseason professional basketball list. I'd look at recaps and box scores but nothing beat actually watching it. I lost the incentive to find ways to watch until a big signing happened.

Sophie Cunningham signed with the Melbourne Boomers for the WNBA offseason which happened to be the 2019-2020 WNBL season. This may seem like an odd reason to spark the drive to find any way possible to watch the WNBL. What does Sophie have anything to do with this?

For four years, I covered almost every single University of Missouri women's basketball game. I was either broadcasting, reporting, or went as a fan. If there was a Mizzou women's hoops game happening at home, I was there in some capacity.

Three of those years consisted of covering the greatest Mizzou basketball player of all time which just so happens to be Sophie Cunningham. Like many Mizzou sports fans, when one of our own is drafted to a professional team, it's ride or die right from when their name is called to when the ink is dried.

Cunningham signed with the Boomers and in came WNBL fans. Sure a vast majority of the new fans were solely watching because of Sophie but there were others who ended up falling in love with the game and became permanent fans of the WNBA. Sophie's signing with Melbourne solidified the Boomers as my favourite WNBL team.

Despite having classes and game coverage throughout the WNBL season, I'd stay up for the 5 am tip offs to watch Sophie and the Boomers play. When a Boomers game streamed through Deakin, I was watching. The time didn't matter. If it was on and available for me to watch, I made time.

My love for the Boomers and WNBL continued during the 2020-2021 hub season. Tip-off times were as whack as the year before but I didn't care. Similarly to the WNBA, the WNBL was one of my escapes from the pandemic and somehow helped with my loneliness. I knew I could rely on the WNBL to be there at the wee hours of the early morning and NCAA basketball during the day.

Fast forward to now. It is 2022 and every single WNBL game is available to stream on FIBA's youtube. I can not only watch the Boomers but I can watch the other seven teams whenever my heart desires. WNBA players are back in the league and all seems right in the world of offseason professional basketball.

I found a place where I can express my passion for Australian basketball with people who care. I have a platform where I can write about the WNBL to an audience that wants the content.

I've always wanted to share my story of how I became an Australian basketball fan. It might not be one for the ages or the most interesting story of all time. Regardless, it's mine.

From a young kid to an adult, my dedication, passion, and love of basketball down under has only grown. Here's to hoping it'll last forever.