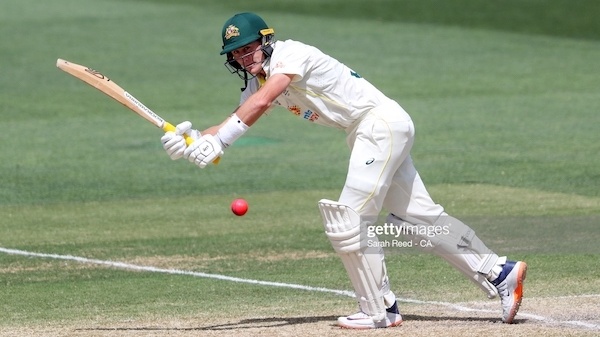 All over in Adelaide: Australia wins second Ashes test

Australia has bowled England out in the final session on Day Five in the Adelaide day-night test match to move 2-0 up in the Ashes series.

All over in Adelaide: Australia wins second Ashes test

Australia has bowled England out in the final session on Day Five in the Adelaide day-night test match to move 2-0 up in the Ashes series.

Despite losing Pat Cummins to isolation and Josh Hazlewood to injury, Australia has bowled out England in the final session on Day 5 of the Adelaide test match to move one test away from winning the Ashes on home soil.

There was drama to begin Day 1 of the second Ashes test match, as Australia had to make a quick change to its lineup. Cummins was informed late on Wednesday evening that he had become a close contact at dinner on the same night and under the South Australian rules was required to quarantine for seven days.

Combined with Hazlewood being ruled out due to a side strain, Australia was forced to find a new pace attack.

Steve Smith returned to the position of captain, elevated from his current vice-captaincy role, and wore Cummins' blazer to toss the coin at the beginning of Day 1.

Jhye Richardson had already been called upon to replace Hazlewood, so it was Michael Neser who learned on the morning of Day 1 that he'd be making his test debut at Adelaide Oval.

Australia batted first and it was another strong partnership between David Warner and Marnus Labuschagne that put the Aussies in a strong position on the opening day.

In the normally challenging dusk period, Labuschagne and Warner continued to fire moving to their half-centuries and beyond.

After a 94 run innings in Brisbane, Warner fell again in the 90s - this time 95 - Ben Stokes breaking through, Warner picking out Stuart Broad on the on-side.

After being dropped by Jos Buttler on 95 at the end of Day 1, Labuschagne hit his century early on Day 2.

Smith went on to make 93, but was trapped lbw by James Anderson. Alex Carey also made a half-century, but was caught by Haseeb Hameed also off the bowling of Anderson.

Australia declared at 9/473 on Day 2 and had a look at England before the day was out.

Elation for wicket on Test debut

Once the ball was in his hand, it didn't take Neser long to strike with the pink Kookaburra.

With just his second delivery, Neser had Hameed flicking off the front foot and it was sent straight to Mitchell Starc who held onto the catch.

It put the pressure right on the English batters who, under the lights of Adelaide Oval, were cracking.

Dawid Malan and Joe Root survived the late Australian surge and resumed with the bat on Day 3.

The English lower order put up little fight, as the side was rolled for 236. Ducks to Jos Buttler and Ollie Robinson didn't help matters for England, who trailed Australia by 237 at the innings break.

There was much criticism of England's decision to go into the Adelaide test without a spin bowler, too many similar options made for a same-same attack that Australia whacked around Adelaide Oval.

Anderson and Broad returned to the English line-up this test match, after missing the first at the Gabba. However, it meant England dropped Mark Wood and Jack Leach, the two players that add variety to their attack.

Without Leach, England did not have a 'spin' bowler in their XI and it meant that Root bowled himself for 26 overs across the two innings, 20 in the first, six in the second.

The decision also left Root turning to part-timer Malan in the second innings to bowl six overs. He did find some success, taking his maiden Test wicket when Labuschagne mistimed a slog sweep to Stokes.

His second came later, Richardson top-edging it to short leg where Buttler was ready with the safe hands.

However, the lack of variation in the pace of the English bowlers was a huge problem on the Adelaide Oval deck. To change things up Ollie Robinson bowled some spin instead of his usual pace, but only took three wickets total for the test match.

More changes are expected for the Boxing Day test, as England look to bounce back from the 0-2 start to the series.

Root fights, but England fail to last the day

With England back in, batting on Day 4 Australia struck early - Richardson taking the wicket of Hameed, who gloved one through to Carey for a duck.

Neser struck trapping Malan lbw, and Rory Burns had to go edged to Smith at slip off the bowling of Richardson.

In came the captain, Root, with a lot of work to do and four sessions to survive if his side was any chance of holding on for a draw.

Earlier in the day, Root had been late to join his side on the field after having scans on his abdominal area. It was later revealed Root had been hit in the nets before play was underway.

In the nets was not the only time Root was hit in the 'abdominal' area on Day 4. Under lights Starc hit him flush in the box at pace, causing the batter to go down for a few minutes.

Root continued but failed to regain his focus and composure, caught on 24, edging a Starc delivery through to Carey and ending play on Day 4.

Ollie Pope was dismissed early on the final day, however, Stokes, Buttler and then Chris Woakes held their spots at the crease well, frustrating Australia.

Woakes even put on 44 runs before he was bowled by Richardson.

England fought through to the final session on Day 5, but Richardson made sure Australia went 2-0 up in the Ashes series with the wickets of Buttler and Anderson.

Though, he didn't exactly have to do much to take the wicket of Buttler (26 off 207), who stepped back and was out hit-wicket in one of the more unusual dismissals.

After failing to strike in the first innings, Richardson took five-for in the second - including both openers and the final wicket to secure the win for Australia.

Labuschagne was named player of the match for his innings' of 103 and 51.

Cummins is expected to return, while England will make a host of changes for the Boxing Day test match, which begins in Melbourne at the MCG on December 26.