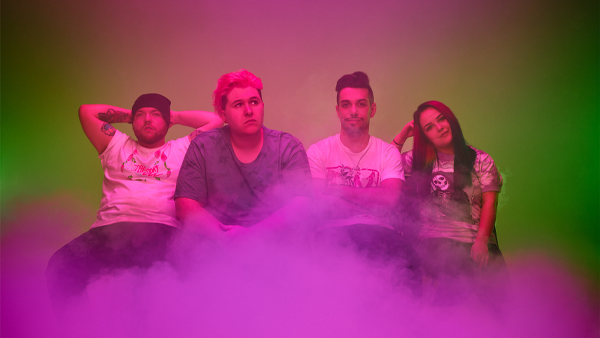 After being born in the early parts of 2020, just before the COVID-19 pandemic wreaked havoc on the music scene (and the world), Paperweight is set to explode in 2022, beginning with the release of its first EP,Green Lotus Blooms, released today.

The five-track EP boasts previously-released singlesTracksandAsteroids! And Where To Find Them, with the band's latest single,Scapegoat,released in conjunction with the EP. Rounding out the remaining songs on the EP are openerPilotandFairy Floss.

For the newly-released EP, Dillinger says the themes ofGreen Lotus Bloomsare simplistic and have deeper meanings of blossoming in the wake of life's darker days and moments.

“The main themes behindGreen Lotus Bloomsare simple: no matter how bad things may seem in the moment, a new chapter is always on the horizon. If we remember not to take ourselves too seriously and find the joy in the small things, we’ll end up in a better place," Dillinger says.

"The EP as a whole symbolises closing the chapters of the past and moving on to better days, so when the light at the end of the COVID tunnel finally emerged, we thought it was time to unleash the EP! We couldn’t be more excited to share that excitement/hope with everyone through this release.”

The first taste of Paperweight throughGreen Lotus Bloomsis withPilot, an opening number that lasts just 23 seconds. In it, Dillinger, with his ukulele and raw vocals, begins the basis for the EP as a whole.

The solo song helps creates an entrance point to the topics, feelings and emotions the EP is about to explore, made more meaningful by the tone of the lyrics; a feeling of overwhelming dread at the mundane day-to-day tasks and the effects that overthinking can contribute to an apathetic mood.

The way Dillinger expresses as much in such a short span, and with the trackbeing unaccompanied by the rest of the band, it invites the listener to properly focus in more closely to the lyrics, and prepare for the greater tone of the EP.

Pilotleads directly into the next offering,Scapegoat- the single and music video released alongside the EP - which is, again, a song that furthers the themes of the EP, with Dillinger singing about a state of the world where one hopes to forget reality and all the problems that one wants fixed, but feeling stuck in an impending doom at the same time.

Scapegoatstarts off with Dillinger's vocals at the forefront, supported by the strumming of Tosti-Guerra and Ballinger before February launches in to complete the first full-band sound of the EP after the cries of Dillinger's "GO!".

The song's vibrancy changes between each verse and subsequent chorus as it goes between the more chilled vocals behind the guitars with a soft sprinkling of drums chiming in, to the more high-energy liveliness the band is synonymous for when each member's talents are fully on show.

A third of the way through the three-minute track, the tonality changes slightly with the bridge, before relaxing it down to that mellow sound once more, only to pick back up and launch towards a high-octane finish to the track.

The song's closing moments may also be its biggest strength, with drawn-out vocals by Dillinger showcasing the range in his voice, and the guitars and drums collaborating to round out the final few notes together.

Tosti-Guerra explained thatScapegoatwas written during a studio recording session, with having fun and forgetting about the pressures of the world both in mind while writing the song, and filming the accompanying music video, which was directed and produced by Crow River Visuals and shot at Kr8tive Freedom Studio in Melbourne.

“Scapegoatwas actually written in the studio whilst recording – it came about totally organically, a song that we feel was a reflection of that time in which we wanted to escape the reality of the current state of the world," Tosti-Guerra said.

“It (the music video) was so fun and easy to shoot because the concept was simple: just to have fun in a colourful space and don’t take it too seriously! We got it done in a few hours and it was probably the most fun and easiest video we’ve done so far".

The third track onGreen Lotus BloomsisAsteroids! And Where To Find Them, Paperweight's most recent single to be released leading into the EP's release, back in late March.

WithAsteroids!, we're again treated to Dillinger's ukulele and lone voice kicking off the song, although in more of an amplified way - both in instrumental and vocals - than what was demonstrated inPilots.

The band's token sound slowly starts to come in through February, then Ballinger and Tosti-Guerra, as the group come blasting into riffs reminiscent of the pop-punk sound with the chorus echoing through with catchy lyrics that exhibits a reflection upon good times.

Asteroids!allows the band to experiment more with shifts in musical style too, with varying degrees of an edgier sound, but scattered with moments of smoother elements, even though the use of the different instrumentals don't differ. The ability for Paperweight to shift from softer moments to a more piercing sound is an undeniable trend to the way the band and its members go about their work.

Even with Dillinger, inAsteroids!, he moves away from the whiney, pop-punk-influenced voice to work in some heavier tones of delivering the final couple of lines from the song. It's a heartening and encouraging sign to see for Dillinger, but also, as a whole, as it exposes a new direction and sound for the band to take, should they want to, having tested it out to great effect in this sense.

The next track onGreen Lotus BloomsisFairy Flossand it again showcases the capabilities of the band with a bit more creative freedom to play around with the sound or use of their respective instruments.

From the very first note, you know this is going to be slightly heavier than anything else Paperweight has produced, and in certain moments of the song, it leaves you on the edge of your seat about what's coming next, especially in moments of a brief pause, the listener is expecting a rapid and energetic tempo - and gets exactly that every time.

There are a couple of cool moments withinFairy Floss, such as the use of synthesisers, the music coming to a halt when Dillinger utters the word "stop", a blistering guitar solo and a consistent ringing out of notes at times, all the while February's drumming is a constant.

There is a brief period where Dillinger is again left to his bare vocals in a moment where a piano comes in to play some structured notes between Dillinger's voice which, although different in bringing down the mood through the steady sound, also serves a purpose to prepare for a killer frantic and upbeat finish.

The closing number on the EP isTracks, which was released as a single in December, giving listeners the first taste of the music that would come fromGreen Lotus Blooms.

Again, we hear the build-up to the song proper with a gradual softened introduction into to the song as it then pounces into a catchier blend of pop-punk. And of course, a pop-punk release wouldn't be just that without a few "na, na, na's" littered throughout, creating the perfect sing-a-long moments.

Trackscertainly leaves you wanting more from Paperweight, with the song coming around to the overarching themes ofGreen Lotus Bloomsto leave the listener feeling more positive about what lies ahead. Despite that, this track is the perfect way to close out the band's debut EP, allowing for listeners to go out into the world to look ahead, but also see the gravity of what this band can achieve, and get up to in the coming months, and years ahead.

Overall,Green Lotus Bloomsis a sensational debut EP release from Paperweight, and one that showcases the immense talent that Dillinger, Tosti-Guerra, Ballinger and February have, especially in the moments where they come together to create those infectious pop-punk sounds influenced by the likes of New Found Glory and Neck Deep, etching their names further in the heavy scene across Australia.

Green Lotus Bloomssees Paperweight sticking to an original sound that is correspondent to the distinct sounds of when the band releasedWasteras its first single in mid-2020, while breaking free, branching out and trying different sounds, as well as remaining melodious and brisk at the same time in some instances.

Paperweight's ability to not allow the pandemic to stop its ability to continue to write and produce music, culminating inGreen Lotus Blooms, is a credit to the band. Obviously, the past couple of years has contributed to the EP and the songs that have been selected to this release, but the band has evidenced that in a way that both references the hold COVID had, but now, more importantly, the greener pastures ahead.

In the past two years, despite the limitations on the local music scene in Melbourne, Paperweight played its first-ever show in January 2021 alongside pop-rockers Terra, celebrated a sold-out headline show a few months later, before rounding out the year with adebut festival appearance at Knight and Day. This year, the band's only performance to date was a headline slot at AM/PM emo night in Melbourne in early April.

However, Paperweight is set to embark on its first-ever tour in celebration of the release ofGreen Lotus Blooms, which includes the band's first-ever interstate show when the tour kicks off at The Burdekin Hotel in Sydney on Saturday, June 4, before a date in Melbourne at The Leadbeater Hotel on Saturday, June 11.

Green Lotus Bloomsis now available on all streaming services. You can find tickets to Paperweight's EP launch tour in Sydneyhere, and for Melbournehere.