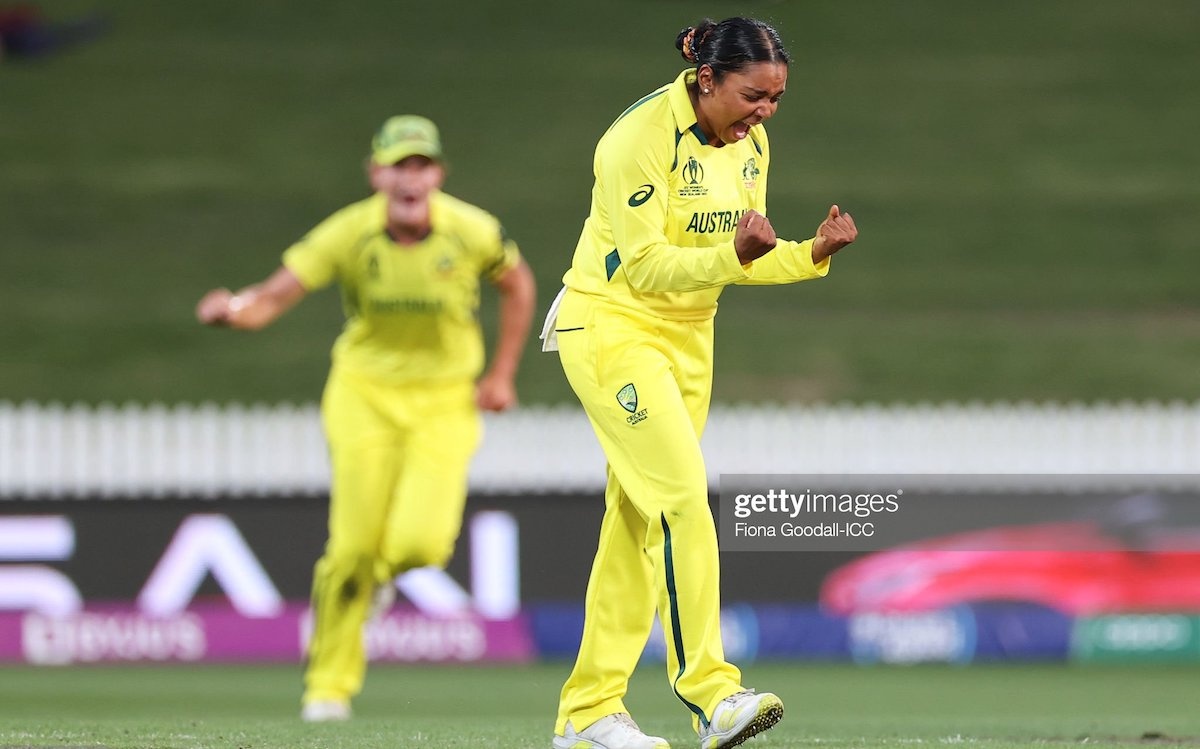 Alana King: Warne 'inspired me to pick up leg spin' and enjoy it

On the day Australia was rocked by the sudden passing of Shane Warne, Alana King's three-wicket haul in her first World Cup match was a fitting tribute to the "Spin King".

Alana King: Warne 'inspired me to pick up leg spin' and enjoy it

On the day Australia was rocked by the sudden passing of Shane Warne, Alana King's three-wicket haul in her first World Cup match was a fitting tribute to the "Spin King".

On the day Australia was rocked by the sudden passing of Shane Warne, Alana King's three-wicket haul in her side's 12 run win over England was a fitting tribute to the "Spin King", who inspired the Australian leg spin bowler to pursue the challenging art.

It was an emotional day for Australia's cricketers, with both the men's and women's sides tasked with finding the mental strength to go out and do their jobs, as the country, and indeed the world, mourned the loss of a great player, Shane Warne.

His sudden death came hours after news had broken of Rod Marsh's passing, both were Hall of Fame members and legends of the sport.

After waking up to the news, the Australian women's team's attention was forced to turn to its first World Cup clash with rivals England in Hamilton, New Zealand.

It was a high scoring and thrilling first match, with Australian spinners Alana King and Jess Jonassen the match-turners, helping Australia to a 12 run win.

Speaking to media the morning after the victory, King said "it's always good to wake up when you've won the first game of the World Cup!"

"I think the girls are really happy with that performance and there's stuff that we can do to take into our next game."

Playing in her first World Cup match, King took three wickets including Tammy Beaumont who she lured down the track to be stumped by Alyssa Healy, Amy Jones who was caught by Haynes and Sophia Dunkley, bowled.

The match wasn't without a little bit of drama from King. She copped a ball to the lower leg and went down in what looked to be agonising pain, though jumped straight back up to bowl her next delivery.

"All part of the plan, isn't it? Take a bit of time out of the game," King joked.

"But yeah, she hit the ball pretty hard, should have probably taken the catch to be honest - one of the coaches said it was a drop catch to me.

"Just happy to be in this team and be playing my role, and hopefully that's taking plenty of wickets during the tournament."

With an impressive 310-run total set on a challenging wicket, thanks to a Rachael Haynes century and a 196-run stand between Haynes and captain Meg Lanning, the bowlers did their job to defend and take wickets.

"I think all the bowlers played their role, and I was just lucky to take some wickets... I was just happy to play my role and get a few wickets and hopefully, that's a trend for this tournament."

King's three-wicket haul was a fitting tribute to Warne, who had been a massive influence on King as a young spin bowler.

She shared on Twitter the "idol" and "inspiration" Warne was to a young King - some of Warne's flare seems to have also rubbed off on the leg spinner known for wearing sunglasses even during day-night matches.

"I think when I was younger, I had one or two sessions with Warnie and some other kids as well. And at the time, I was probably a bit starstruck to have Warnie down the other end and yelling out a few tips," shared with media on Sunday morning.

"But look, he's an icon of the game and a legend that will always be there for the generations to come.

"He inspired me to pick up leg spin and have fun at it. And yeah, he was just awesome to be watching when I was growing up and can't say much more than that."

Her celebration after taking her first World Cup wicket was a nice touch. After drawing Beaumont into a delivery only to have it go through to Healy behind the stumps who did the rest, King tapped the black armbands on her shirt, acknowledging her idol, Warne.

"It was a bit of an instinct moment, to be honest, nothing was planned," she shared.

"It was just a nice ball that came out of my hand and hopefully he was proud of that.

"Took one of the Poms out [too] - there's nothing better."

The influence of the "Spin King" is felt around the world and King acknowledged that he transcended generations of cricketers.

"I think everyone when you talk about spin bowling, I think he's the first person to come to anyone's mind. So whether it's off spin or leg spin, I think he's just the Spin King and is for a reason.

"He's just got a massive influence on the spin community around the world."

Another spinner who helped turn the game was Jonassen, whose two wickets in the final over and expert bowling in the last five held up England for Australia's 12 run win.

Jonassen's night was also highlighted by reaching 200 international wickets, an incredible feat from the bowler.

"I think Jonno (Jonassen) is just an awesome player to have in my team and she's well experienced, she's the number one ODI bowler in the world and she's got so much so much to give to not just me, but to this team and to her teammates around her as well.

"I think it's just phenomenal and for her to get 200 International wickets and I'm sure there's plenty more to come, but I think it's a great accolade for such an amazing person.

The confidence of Lanning - and the Australian side - to throw the ball to Jonassen shows the faith they have in her to bowl tight and even take some death wickets.

Jonassen also wanted that ball in her hand, just as she did in the 2020 T20 World Cup semi-final, and many times before that.

"I think we're very similar and we want the ball in pressure situations," King said.

"I knew coming into the last five overs, she came to me and she was like, 'Gee I'd love that ball my hand' and you know, to have it in the 50th over and with the game on the line, it just shows the calmness about her and she knows her skills so well that she can execute in the most immense pressure.

"To have that catch as well - I call her 'magnetic arm' because gee that was nice to watch."

"I think she was more shocked than anything!

"I think her celebration said at all, I think even with Katherine Brunt just gave a big smile and a bit of a chuckle because that's just cricket, I guess, and we love that. But I'm stoked for JJ to be part of that high tier of athletes."

Australia is back in action on Tuesday with its second match against Pakistan, from 12pm AEDT on Foxtel and Kayo Sports.