Age of Empires is back with a healthy dose of nostalgia

Age of Empires four is here and bringing the nostalgia with it. Find out what Edge of the Crowd thinks about the new instalment. 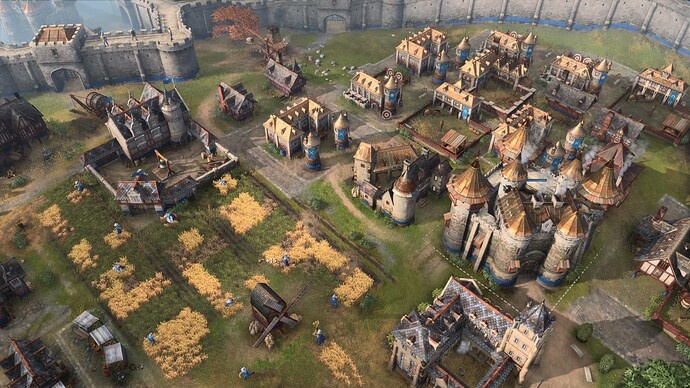 After more than a decade Age of Empires is back with its fourth edition. Under new developers Relic Productions, there were always going to be questions about whether it could live up to the memories that so many gamers from the ’90s and 2000s have of the epic series.

Almost every gamer that has come through in recent years looks upon Age of Empires as the starting point of their journey. The games opened real-time strategy to the masses; the uncomplicated nature allowed children to enjoy their time while still having more advanced features for those who wanted to deep dive into the games.

Age of Empires Four builds on the classic’s games one and two while essentially moving on from the travesty that was AOE3. The second edition of the series is widely regarded as the pinnacle of RTS gaming, and Relic has tried to build on that edition in releasing what is almost a love letter to the original series.

In terms of gameplay, Relic has also moved back to the second game by setting the game in the medieval era. A somewhat disappointing and safe decision, it would have been nice for them to open to game up further and allow players to go into different periods. The sense of nostalgia that players get from playing as medieval England or France will bring a smile to people who played the original games.

The campaign is a beautiful look into the medical world (Credit: Microsoft/Relic Productions)

The campaigns really make this game, as visually they are beautiful, and the documentary-style cut scenes blend seamlessly into the gameplay. In fact, the documentary scenes themselves wouldn’t be out of place on the History Channel.

By showing the real-life locations of these historical battles it gives players a different perspective and brings them closer. Rather than just being a game, this is a history lesson and a powerful history lesson at that.

We go through the campaigns of the Normans, Mongols, Rus, and English and some of their most significant historical moments.

Perhaps one criticism of these campaigns is the jarring nature of a narrator. A suggestion to make the game more immersive would be to have in-game characters narrating the campaigns. How much fun would it be to hear Genghis Khan explaining his plans for war?

Relics seem to know where their bread is buttered for this game. They made the campaigns difficult, not just slightly but very difficult; playing on standard, I needed multiple attempts on quite a few of the maps. I couldn’t imagine how difficult it would be on the more challenging settings.

This is done on purpose, though; Relic knows that it will be those who have played the original trilogy that will primarily be coming back for this edition.

The campaign, of course, isn’t the only part or even the main part of this game; you will likely be playing much more of the different Skirmish maps. What Relic have done in this game is build unique civilisations with many more unique characteristics than in previous games.

Delhi are using war elephants and researching with scholars inside blacksmiths to allow consistent upgrades rather than the traditional click to research of other civilisations. The Mongols are also extremely interesting in the skirmish mode; they show the nomadic nature of Mongolia, allowing players to essentially pick up their base and move it to a new location.

The most significant area of change compared to the second edition is how players advance ages. Firstly, you will need to select a villager to build a civilisation specific ‘special’ building to move to the next age. Each of these has different characteristics depending on whether you want to go on a more economic or military route. In some ways, AOE4 combines the best of the Civilisation series and the classic Age of Empires.

Battles are less violent than long time fans would like. Gaming has certainly changed since the AOE 2 release, and perhaps Relic decided to go with nostalgia rather than what gamers expect today.

Essentially military units poke each other with sticks until one dies by falling on the ground. While it will allow Relic to keep a PG rating on the game, the long-term players, who are mostly adults now, will be somewhat disappointed that the game didn’t grow with them.

The biggest issue for Relic, though, is the continued growth of the Age of Empires 2: Definitive Edition. That game continues to grow and is even adding co-op campaigns and more historical battles. If people are after nostalgia, it will make more sense both financially and for gameplay purposes to go back to the older game.

That being said, AOE 4 offers an excellent game overall, even if it is somewhat content thin. Hopefully, Relic will continue building on this game, adding more campaigns, civilisations, and maps. Relic hasn’t done a bad job here; they have offered some new ideas, and if this is the start of a whole new AOE series, fans should be more than excited.

If you are a fan of the first series, Age of Empires 4 is certainly worth buying, or if you have Xbox Game Pass, it is free and 100% worth the download. Relic has done a great job bringing something from our childhoods back and should be praised for their work.