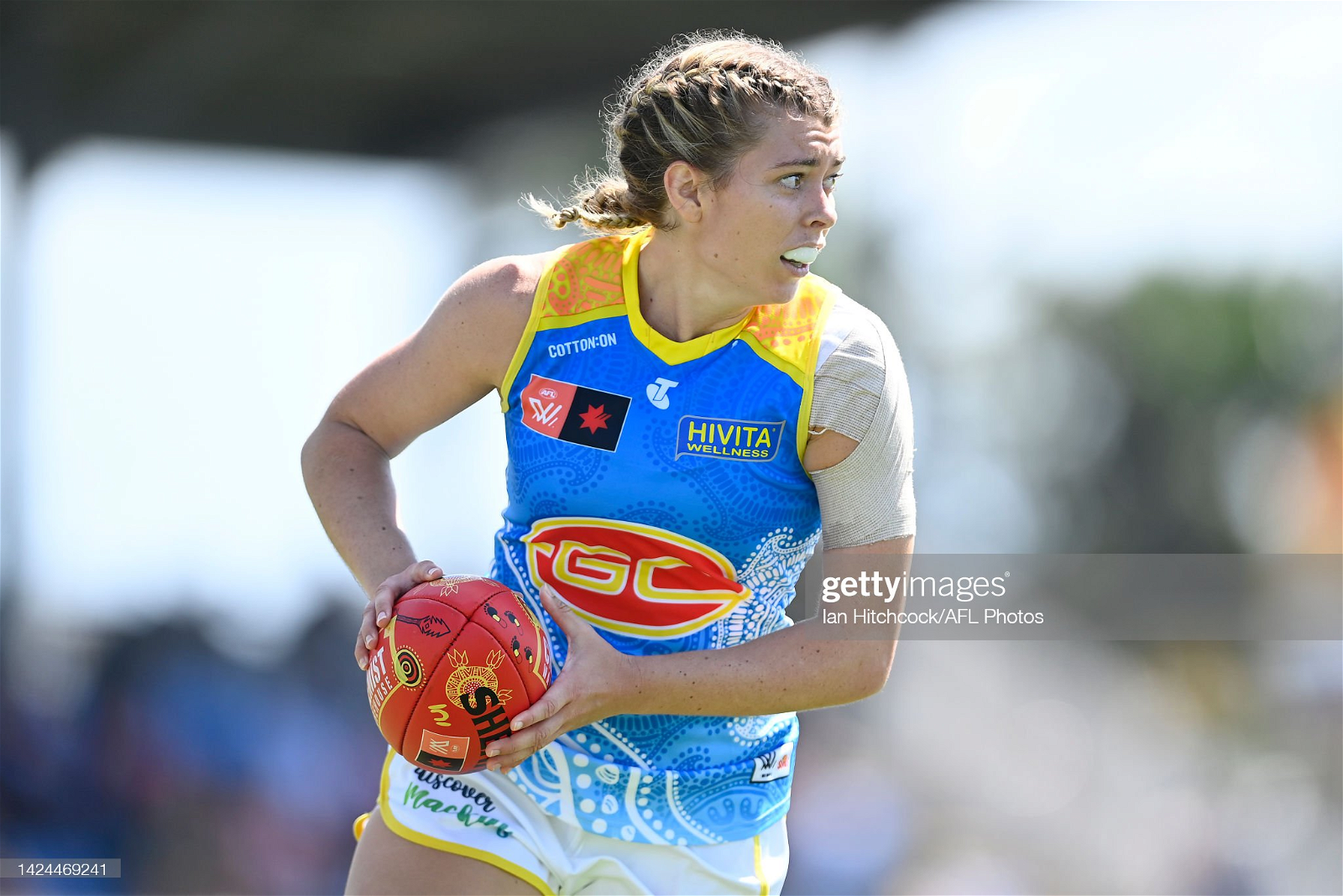 AFLW Season Seven Team of the Week: Round 4

Young guns dominated across round four of AFLW Season Seven, and have been duly rewarded by being named in our Team of the Week.

AFLW Season Seven Team of the Week: Round 4

Young guns dominated across round four of AFLW Season Seven, and have been duly rewarded by being named in our Team of the Week.

Crafty Conway has an incredible goal sense, and that is why you should never leave her unattended at the back of a pack sitting at the top of a goal square - she will make you pay.

In the final term, that is what she did with one of her 17 possessions to put the Lions in front.

When Narrm came out all guns blazing in the first quarter, it was Hore with the killer shots on goal with two majors to her name.

Unfortunately for her side, it was all she would muster, but her continued efforts saw her rack up 16 important disposals and lay five tackles.

I learnt this game that I would not want to be on the receiving end of a Bannister tackle, and unfortunately for Richmond, a Tiger was in that position six times.

Bannister kicked one goal, but it was her work to spoil and pressure when the ball was in the middle of the ground or coming out of her side's forward 50 that was more noteworthy.

Howarth got the Suns' first major on the board after working the angle from the boundary to kick the ball through the big sticks.

She would later kick another goal in her side's win over St Kilda, and her 22 possessions plus multiple attacking set-ups also aided their cause.

One of McKenzie's five marks was taken while soaring above a pack, which earned her a Mark of the Year nomination.

She was in and around the contest in all the right places and had 14 disposals to her name by the end of the game.

Prespakis was the easiest choice for Team of the Week this week after her incredible individual effort. She was rewarded with the perfect ten the AFLCA AFLW Champion Player of the Year votes, taking her to the top of the leaderboard.

She became the youngest AFLW player to collect 30 or more disposals in one match after notching up 32 disposals - a personal best - at 19 years and 187 days.

Not only did she have a serious dose of leather poisoning, but she also had the highest amount of metres gained (464m) and tackles (nine) of the game, ten intercepts, six clearances, and six inside 50s.

It was a wet day at ETU Stadium, but Conti had ice in her veins after her cool, composed effort helped the Tigers beat the Bombers.

Her 15 disposals and whopping nine tackles, paired with an exquisite snap goal, were significant parts of the winning Richmond puzzle.

Her perfect centre clearance in the dying moments of the game allowed Richmond to just clutch the win.

Ewings is already showing herself to be one of the stars of this game, and after she was nominated last week for Rising Star, she went even bigger in round four.

At 18 years of age, she became the first AFLW player to have a nine-clearance and three-goal game, all from 19 disposals and eight tackles.

Her first goal was fired through from outside 50 after weaving between a couple of defenders, and she followed it up with a set shot after the three-quarter time siren and a third just into the final term.

What a debut season Sheerin is having. Her defensive efforts were a huge factor in Essendon's forwards being unable to move the ball as freely as they have in previous games.

She gained the most meterage of any AFLW played in round four with a massive 572m and collected 20 disposals to go alongside that.

Mithen has had a season to remember, and her 50th match was no exception.

With a game-high 23 disposals collected and seven tackles laid, she has become a vital cog in the Narrm machine.

Her stat sheet may not look impressive, but McDonald's effort to shut down explosive Giants forward Cora Staunton sure was.

McDonald had a job to do, and she got it done, as Staunton remained goalless all game.

She did have six tackles to her name, which added to her great defensive game.

What a saviour Biddell has been for the Crows in defence.

Her 18 disposals and three marks were game-saving for Adelaide, and she has become as reliable as the best defenders in the competition at 24 years of age.

Defensive rebounds by Pugh and the rest of her backline were the firestarters for a majority of the Dockers' goals against Carlton.

Pugh's 335m gained was a personal best, and her 16 disposals included a beautiful handball to Emma O'Driscoll.

Is there a better ruck in the AFLW this season than Breann Moody?

She recorded the highest number of hitouts of the round, and some of her six marks were crucial in Carlton's defensive line.

Her highlights reel has a new addition: a goal scored after outmuscling Mim Strom in the goal square, giving her side a one-point lead in the last quarter.

Rowbottom is proving why she is a former number one draft pick, and Gold Coast is ever-so-grateful.

She picked up 30 touches - G. Prespakis was the only player over the whole round to collect more - and her nine tackles and six clearances were the most notched up in the game.

Seven score involvements were also marked alongside Rowbottom's name, as were 10 AFLCA AFLW Champion Player of the Year votes.

Lamb is so consistently good for her Doggies that it would feel weird to leave her out of the Team of the Week, but there was no chance she was missing out after her round four performance.

The quiet achiever collected 25 disposals, made seven clearances, laid five tackles, and even slotted a goal - the perfect way to celebrate her 50th game.

Workhorse Hatchard had 26 touches to her name and four tackles in her huge effort in the Crows' engine rooms.

She also had a game-high ten marks, but it was her 100 per cent time on ground that was arguably the most impressive, especially considering she battled through a foot injury to play last season.

West Coast skipper Swanson received the perfect 10 in the AFLCA AFLW Champion Player of the Year votes after her side's narrow win over the Giants.

She laid a massive nine tackles to go alongside her 23 disposals, and the cherry on top was kicking a goal against her former club.

McKay's work to gather contested ball wins and send in deep inside 50 entries were part of the reason Carlton was able to stick with Fremantle.

Her 29 disposals, ten clearances, and eight tackles certainly helped with that, too, and her efforts were rewarded with nine AFLCA AFLW Champion Player of the Year votes.

Dowrick has been developing into something special for Port Adelaide, and her round-four match was proof of that.

The hard nut not only finished with a game-high 24 disposals, but she also had the most tackles of the match with 14, and she booted a 60m bomb which went through the big sticks.

Her pace and power make her to be a prize Port possession.

The Kangaroos' best afield, Garner, led from the front and was in all the right places, especially early on.

She racked up 22 possessions, three marks, and two tackles against Geelong.

Marinoff's work rate was slightly down on last week's, but her standard of play is so high that her match was still impressive.

She had 23 possessions, including a couple of brilliant marks, along with six clearances and five tackles.