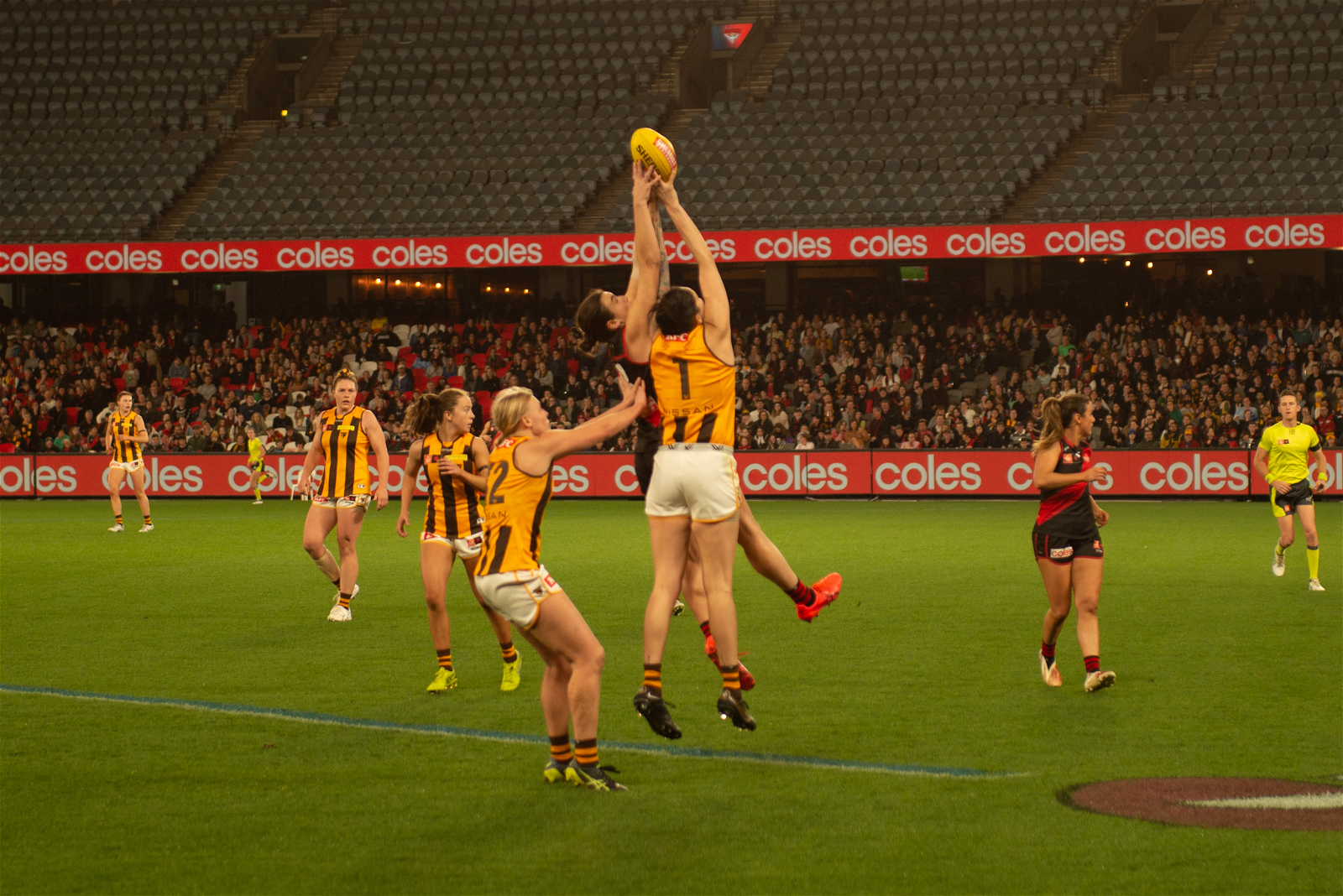 AFLW Season Seven Team of the Week: Round 1

AFL Women's teams took the field for the first time in Season Seven over four days, and for many players, it was their first time playing in the competition.

AFLW Season Seven Team of the Week: Round 1

AFL Women's teams took the field for the first time in Season Seven over four days, and for many players, it was their first time playing in the competition.

We've picked who shone in Round One to make Edge of the Crowd's AFLW Season Seven Team of the Week.

Shierlaw started the season with a bang, playing as a key forward for St Kilda, and having a major impact. Her four goals proved to be the difference for the Saints, in their decisive victory over the Swans.

She was outstanding as a marking target up forward, consistently bringing the ball to ground, and ensuring that her teammates had an option for a bailout kick down the line.

Bodey was outstanding for the Lions, bringing plenty of forward pressure to keep the Lions on task, and dominating against the Dockers. Bodey's five tackles were part of a strong showing of forward pressure, as the Lions' fleet-footed brigade of forwards gave the defence no time and space.

Two goals could have been a lot more, with Bodey missing three shots on goal, but it wasn't an issue over the weekend, as the Lions were comfortably ahead of the Dockers for most of the match.

Toogood made quite the impression in her first outing for the Bombers, and immediately showed that she will be a focal point for them this season. Seven marks was a handy return, as the midfielders looked to target Toogood on the way into forward 50.

Their focus paid off, as Toogood kicked two goals, and steered the Bombers to a comfortable victory over the Hawks in the first battle between the expansion sides.

Tahlia Randall made an impact for the Kangaroos, as they made a statement in a big win over the Suns. Randall's kicking was lethal, as she piled on three goals for in the first three quarters. She was a strong option all afternoon, and the Suns had no answer for her powerful marking play.

Her third goal was enough to kill off the Suns' hopes of a comeback, as she kicked truly after marking a knifing ball from Jasmine Garner.

Houghton was another player who made an impact for an expansion side that was all too familiar. Five tackles and ten disposals in the front half for the Power was exactly what they needed, as they were challenged by the Eagles.

Houghton was a central figure as the Power brought the ball forward, and was key as the Power piled on four goals in a row through the middle of the game, before they were overwhelmed late.

Eliza West doesn't always get the same attention that her Melbourne midfield teammates get, but that doesn't mean she doesn't have plenty of impact. She had 25 disposals, including 19 handballs as she worked the edges of the contest for the Demons.

It wasn't just West's work with the ball in her hands, as her six tackles helped set the tone for the Demons' relentless work inside and around the ground, with their exceptional pressure enough to take first revenge after last season's grand final defeat.

Aisling McCarthy was part of the Eagles' dominant finish, as they ran over the top of the Power in the expansion side's first match. McCarthy was a massive presence in the engine room, with eight tackles and six clearances for the afternoon.

It was her work in front of goal in the final quarter that was key, with her vital goal helping to kill off the Power's chances of a late comeback and an inaugural victory.

Prespakis' work through the middle of the ground was key to the Bombers' dominant performance against the Hawks. 26 disposals was one of the top efforts for the weekend, but it was her six clearances that proved so vital, with the Bombers controlling the contest.

Prespakis was one of a number of Bombers to hit the scoreboard, with her goal bringing a rousing cheer from the fans at Marvel Stadium, in a big win for the expansion side - the only expansion team to win on the weekend.

In her 50th game, Emma Kearney captained her side to one of their most dominant performances, and put in a handy individual effort to go with it. Her final stat line was 18 disposals and five marks, but it was the impact that those disposals had that made them so effective.

Time and again, Kearney was the initiator of the fast ball movement through the middle of the ground that the Kangaroos used so effectively, as they dominated the Suns. Every time Kearney had the ball in her hands, it seemed like the Kangaroos had been put on a path to send the ball forward inside 50.

Schleicher was outstanding across the half back line for the Magpies as they controlled the game. Five marks and 20 disposals doesn't quite show how impactful Schleicher was as a rebounding force for the black and white, kickstarting attack after attack.

Schleicher also had important contributions in her defensive role, with two tackles and a strong intercepting presence, slowing the Blues' forward line early in the match while the game was still there to be won.

Lucas-Rodd worked hard in her first game for the Hawks. The former Saint tallied 17 disposals, with 14 kicks as she tried to rally her side from the defensive end, and create rebound play.

The Hawk also applied plenty of pressure across the half-back line, with eight tackles in a strong individual performance, despite the mismatch on the scoreboard.

Lucy McEvoy's game may have flown under the radar in a weekend of outstanding performances, but without her, the Blues would have certainly been blown out by the Magpies.

McEvoy had 24 disposals, including 10 intercepts, along with six tackles, as she almost singlehandedly held back a Collingwood wave that would have threatened the Blues' season from the opening bounce.

Eilish Sheerin may have been on AFLW debut, but the 29 year old showed no signs of being unable to step up to the next level, with a masterful performance in defence. She managed 19 disposals while steering the Tigers, and keeping the Cats at bay until late in the match.

Sheerin was seemingly everywhere, with 16 intercepts and four tackles, as she thwarted the Cats at almost every opportunity. Her ability to counterattack and take the game on will help the Tigers all season, as they look to push for finals.

Breann Moody was outstanding for the Magpies, as she consistently gave her midfielders first use of the ball. In the end she had 24 hitouts, but it was also Moody's work around the ground that made an impact for the Magpies.

She finished with three tackles, 11 disposals and a goal - in a stat line that encapsulates how comprehensive her performance was, getting the season off to a flier for the Magpies.

Jasmine Garner was also celebrating her 50th game, and came away with a performance worth celebrating. Garner was best on ground, dominating inside, with seven clearances. She also set up the Kangaroos attack beautifully, with six inside 50s from her 27 disposals.

A goal was a great way to top off the afternoon, but if Garner continues to play as she did against the Suns, she will be firmly in the conversation for the Best and Fairest Medal at the end of the season, and the Kangaroos will be playing finals.

Abbey Dowrick made an impact for the Power, with 21 disposals in defence for the Power. Her ability to distribute the ball allowed the Power to rebound quickly, sparking four unanswered goals through the middle of the match.

Dowrick's pressure was key, with seven marks, including strong intercept play, stymying the Eagles' attack, while her four tackles contributed to the pressure the Power put on the Eagles. It wasn't enough to get the win, but it was no shortfall by Dowrick on the day.

Scott played like a seasoned veteran, despite being a Bombers' draft pick, with her excellent overhead marking and aerial contest work up forward. Her goal set the crowd alight, as teammates came from everywhere to celebrate with the youngster on AFLW debut.

Anderson had 23 disposals, three marks and four tackles in a performance that flew under the radar. While teammates like Emily Bates, Bodey and Orla O'Dwyer catch the headlines, Anderson put in another strong performance to help the Lions overwhelm the Dockers and kick off their season in style.

Paxman was outstanding as always for the Demons. The midfielder tallied 24 disposals and four tackles, and was a strong presence for the Demons, guiding the ball around the ground. She was especially effective taking the ball inside forward 50, and will play a key role this season.

Blackburn was one of the most instrumental players on the ground, as she fought tooth and nail to put the Bulldogs in a matchwinning position. She had 21 disposals (10 contested), eight clearances and six tackles as she ran riot in the middle of the ground for the Bulldogs, taking them to victory.

Cunningham was in a new uniform, and an unfamiliar position, as the former Demons' forward found her new home in defence for the Hawks. It is a sight that will quickly become familiar, as Cunningham looked in total control, and played with an authority that belied the scoreboard and the inexperience around her.