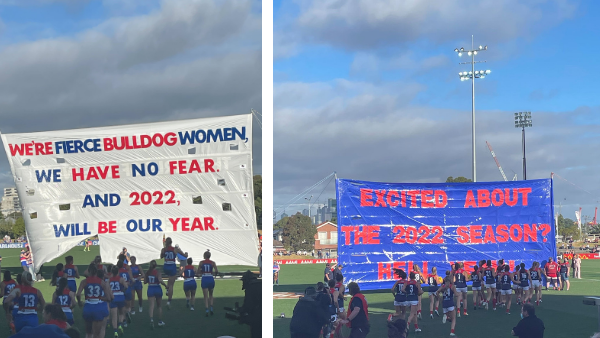 As the first round of the AFLW season continues, Saturday was filled with three great games, and plenty of talking points.

As the first round of the AFLW season continues, Saturday was filled with three great games, and plenty of talking points.

Across the first round of the AFLW season, there were some cracking games on Saturday, as afternoon football came back with a bang.

Each of the three games had plenty of special moments, and there are storylines emerging already that will generate discussion in the coming weeks, including on theWhat the Ruck podcast.

After a vibrant start to the season as Richmond Tigers thumped St Kilda at Skybus Stadium on Friday night, three matches took place on Saturday afternoon.

North Melbourne was without captain Emma Kearney as she missed the match after testing positive for Covid-19.

Despite being strong favourites, the Kangaroos only scored one goal in the first half, courtesy of Jenna Brunton.

While the Cats struggled to move the ball into the forward half, the defence was secure, and the Kangaroos struggled to score. Maddy McMahon was strong in defence, especially after Cats captain Meg McDonald was forced from the field.

The Kangaroos were in command for parts of the game, but fell behind in the third quarter.

Ashleigh Riddell continued to work hard through the midfield, with 35 disposals and seven tackles as she led from the front.

The Kangaroos kicked away late, scoring the last three goals of the match, including one to Kaitlyn Ashmore, who had been injured earlier in the match, to seal the victory.

The Kangaroos will take heart from the fact that they closed out the match strong, despite the injuries piling up, including a head knock to Kim Rennie, and ankle issues for Ashmore and Bruton.

The Kangaroos will hope to have Kearney back next week, as they take on the Adelaide Crows.

The Cats meanwhile, will be thrilled with the performance of debutant Georgie Prespakis, who had 20 disposals in her first AFLW match. After dominating at VFLW level last season, Prespoakis looked right at home at the top level.

The Melbourne Demons started fast, and kept the foot down as they dominated the Western Bulldogs. The Demons were able to play a possession brand of football, operating at 74 per cent disposal efficiency in the first quarter, as they jumped out to a three goal lead.

The Western Bulldogs were on the board, thanks to a goal from Izzy Huntington. Huntington ran down Demons star Karen Paxman from behind, and converted the free kick.

In a heartbreaking turn of events, Huntington went down with. anon-contact injury moments later, clutching her right knee, which has previously had a torn ACL. It seemed to momentarily take the wind out of the Bulldogs' sails.

However, the Bulldogs came out in the second half with plenty of energy, as Ellie Blackburn dominated the middle, and Bonnie Toogood provided a strong target in the forward 50.

As the Bulldogs appeared to be drawing close, new Demons recruit Tayla Harris found a goal to snuff out the comeback. The Demons dominated the final terms, suffocating the play and finishing 24 point winners.

Their new game style will be a talking point, and a challenge for the rest of the competition to respond to. The Bulldogs will be hoping that Huntington's injury is not as bad as it first appeared.

In the Western Derby, and the only match that will take place in Western Australia in the first half of the competition, the Fremantle Dockers reminded the competition that they are a serious premiership threat.

Ebony Antonio submitted her first nomination for goal of the year to open her account for the season late in the first quarter.

Antonio finished with three goals, as her ability to find the big sticks proved the difference between the two sides.

Kiara Bowers was equal best-afield with Antonio, as the reigning best and fairest had 24 disposals and a massive 14 tackles. She was joined in the Dockers' dominant midfield by Hayley Miller, who has taken the captaincy reins, and had 16 disposals and two goals.

The Dockers dominated the last term with 16 inside 50s to none, and maintained their perfect record in AFLW Derbies.

It was not all bad news for the Eagles, as they dominated much of the play in the middle of the game, and were on the board in the second half with a goal to Emma Swanson.

Swanson's goal started a fightback that was as close as five points at three quarter time, as Aimee Schmidt scored in her first match for the Eagles.

Unfortunately for them, with the wind in the final term, the Dockers ran away with the match to be 28 point winners in the end.

Both sides appeared to get through the match with no major injury concerns, as they prepare for extended road trips so that the AFLW season can continue with as few disruptions as possible.