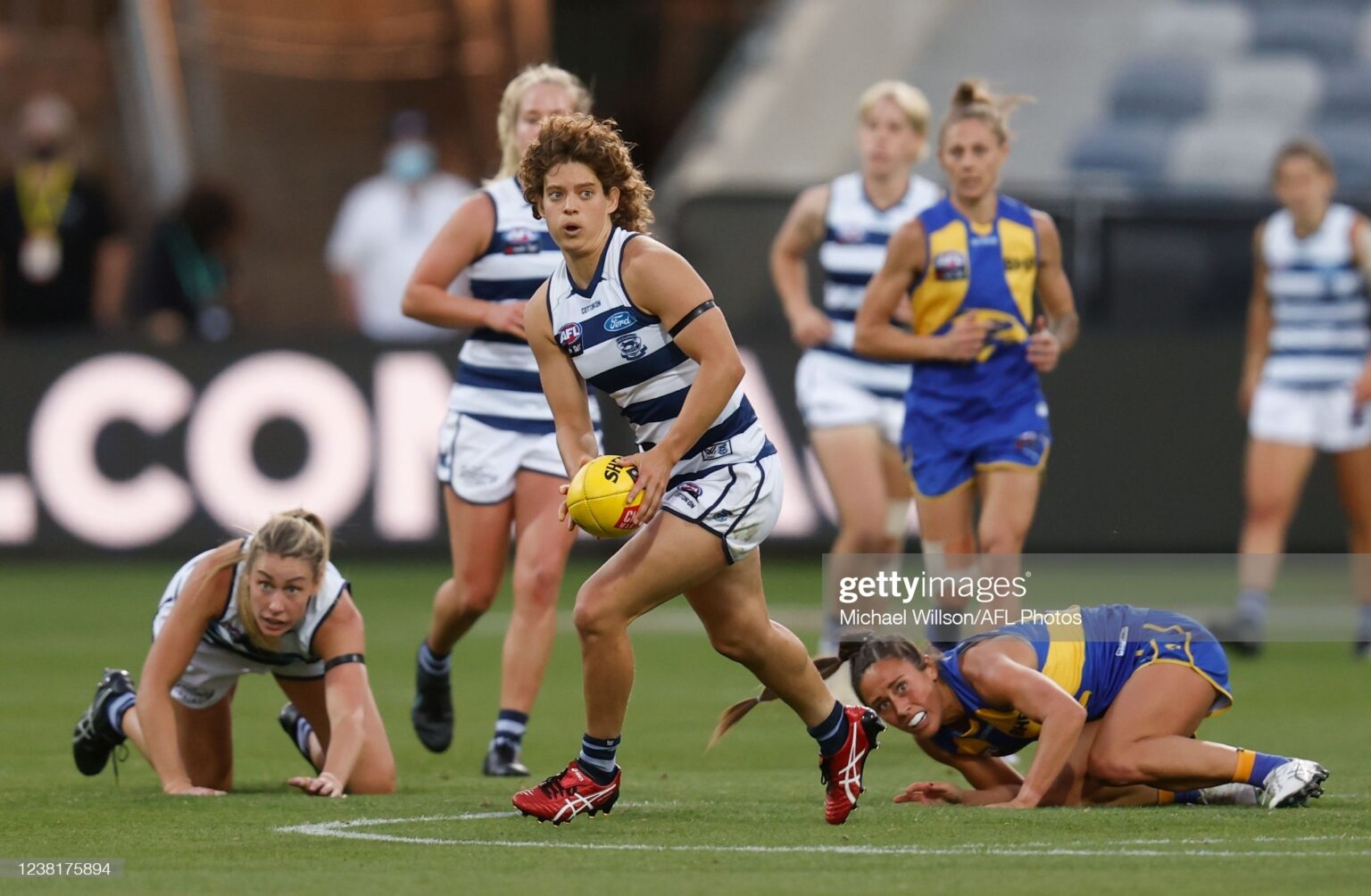 AFLW Round Five: The Round So Far

Round Five of the AFLW kicked off with a thriller, before the premiership contenders started to flex their muscles with convincing wins.

AFLW Round Five: The Round So Far

Round Five of the AFLW kicked off with a thriller, before the premiership contenders started to flex their muscles with convincing wins.

The AFLW season kicks on with Round Five, despite Covid-19 wreaking havoc on the schedule, as the Cats notched up their first win this year.

The Demons and Lions also recorded strong wins, as the heavyweights of the competition made their mark.

The Cats jumped out to an early lead, with Phoebe McWilliams snaring two goals in the first half, while the Eagles were kept scoreless in the first quarter.

After spending three weeks in a Melbourne hub, the Eagles were out of the blocks quickly, with captain Emma Swanson back from suspension and setting the standards for the team again.

The pressure was immense across the board, with the margin just two points at three quarter time, and the Eagles' relentless tackling pressure bringing them back into the contest.

With 90 seconds left in the match, Aimee Schmidt calmly slotted a set shot to take the lead for the Eagles for the first time in the game.

Having kept the Cats to just two behinds in the second half, the Eagles looked to be in control before Darcy Moloney was the hero for the Cats, snagging the matchwinner with 22 seconds left, making it 27-24.

One last surge from the Eagles was cut off by Nina Morrison, sealing the first win for the Cats this season, and the first under new coach Daniel Lowther.

Wild weather in Maroochydore made sure that one end was going to be the scoring end all afternoon.

The Magpies were kicking to that end in the first quarter and were in trouble by quarter time, when scores were two-all, with neither side able to find a major.

Eloise Chaston was finally able to score a goal for the Magpies in the third term, but alarm bells will be ringing after the Pies failed to kick more than one goal for the second week in a row.

Emily Bates found a way to score against the wind in the third term for the Lions and Orla O'Dwyer showed her class.

Greta Bodey starred for the Lions, chipping in 15 disposals, seven tackles and a late goal as the Lions ran away with the contest 35-11.

Magies midfielder Jaimee Lambert will face a nervous wait, after collecting Shannon Campbell with her hip while competing for a loose ball. Campbell was assisted from the field and didn't return.

The Lions have now won three in a row as their premiership defence starts to hit its straps.

The Demons were determined to return to the winner's list after a tough loss against the Adelaide Crows last week.

The hard-fought contest was another match without a goal during the first term, as both sides attacked the ball with relentless pressure.

Despite missing key defender Jade Pregelj, the Suns' defence was set up well, with Laura Ahrens marking up on Tayla Harris, before leaving during the third quarter with a leg injury.

The Demons pulled away during the second and third quarters, as Libby Birch and Daisy Pearce found their rhythm, and Eden Zanker went head to head with the Suns' Charlie Rowbottom.

The Suns, as they had in the last two weeks, came home like a house on fire, and with the wind at their backs.

It wasn't enough this week, as the Demons showed off their premiership credentials to hold off the fast finishing Suns.

The tackle-fest ended with the Suns laying 91, while the Demons were close behind with 86. The problem for the Suns was that the tackles weren't reflected on the scoreboard, as the Demons entered the last term with a three goal lead, and finished with a 12 point advantage, 38-26.

Round Five of the AFLW continues on Sunday with three matches.