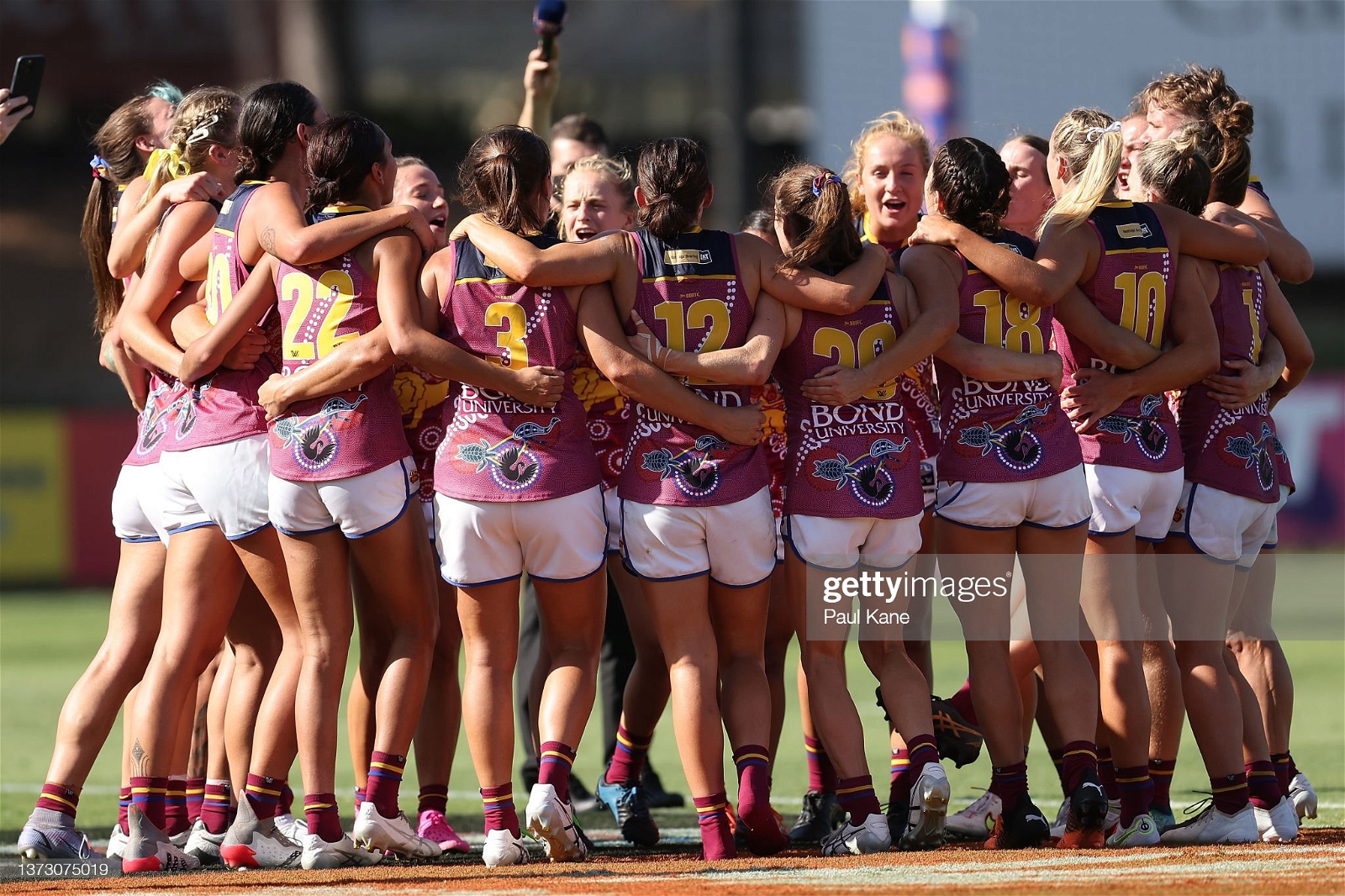 Round Eight AFLW action wrapped up with four hot contests on a Super Sunday, in which St Kilda had its first win, Brisbane Lions broke records and Darcy Vescio hit 50 career goals.

Sunday's action began in exciting fashion, as the Saints recorded their first win for the season, holding on in a thriller over the Gold Coast Suns.

Collingwood put up its best-ever score of 66 to down the Western Bulldogs, and the Carlton Blues closed out the round with a win over the GWS Giants.

However, the highlight of the day was the 74-point smashing the Brisbane Lions gave the West Coast Eagles on Whadjuk Noongar Boodja. It was a record-breaking win that sees the Lions move into the top four, only behind the Dockers on percentage.

If you missed any of Saturday's action Round Eight, catch uphere.

Eight games into the 2022 season, St Kilda has finally won a game, holding on in a thriller against Gold Coast, 34-31.

The Saints were in trouble early as their only ruck Rhi Watt went down with a knee injury in the first quarter. She played no further part in the game, but her side persevered for the win.

A three goal to zero opening term was exactly the start the home side was after, with Nicola Xenos, Nat Exon and Molly McDonald all kicking truly.

Despite Kate Shierlaw adding another, Gold Coast lifted its intensity after the first break and hit the scoreboard for its first goal, curtesy of Tara Bohanna.

The former St Kilda VFLW player then booted two final-quarter goals, to take her tally for the day to three, however, the Suns were unable to finish the match off quite as accurately.

Sarah Perkins finished with one goal, but was unable to slot final quarter set shots that would have given Gold Coast the lead.

Tori Groves-Little was the other injury concern from the match; they came from the ground after copping a leg to the back of the head in a marking contest.

St Kilda will face Geelong next Saturday to open Round Nine, while Gold Coast will be back in Melbourne against Carlton on Sunday.

Bonnici down but the Pies get it done

Despite losing Brittany Bonnici to what is feared to be a serious knee injury, the Collingwood Magpies have powered on to a 25-point victory over the Western Bulldogs.

On Wurundjeri land at Victoria Park, the Magpies 66 points was the side's highest ever AFLW score, and the win also sees them retain their place in the top six as the competition closes in on finals fever.

Bonnici had six damaging disposals in the opening quarter, but unfortunately only played the first 13 minutes. The star landed awkwardly as she attempted a saving mark in the back pocket and immediately went to ground.

Clutching at her left knee, the vice captain finished the game on crutches with ice on her knee, Collingwood sweating on scans to reveal the extent of the damage. The midfielder has never missed a match in her career, after debuting in Round One, 2017, but could face some time on the sidelines.

Aliesha Newman was also forced from the ground with concussion, the two injuries souring Collingwood's win.

Jaimee Lambert kicked three goals, while Sabrina Frederick found her rhythm in the Magpies' forward line slotting two goals to go with 12 hit-outs for the afternoon.

Ellie Blackburn had 18 disposals, including two goals for the Bulldogs, but her teammates were starved of possession by the Magpies.

The Bulldogs fought hard and were around the mark, but fell a couple of goals behind at the main break, before the Magpies really put the foot down in the third to extend the margin.

Both sides have interstate trips scheduled in Round Nine; the Western Bulldogs make the journey to Perth to face the West Coast Eagles, while Collingwood travels to Adelaide to take on the Crows.

Lions break records in the west

The Brisbane Lions have scored the highest AFLW score in history, kicking 15 goals for a 74-point victory over the West Coast Eagles, 98-24.

Just two points off cracking the ton, the Lions ran rings around the Eagles, showing no mercy as they pushed out to the biggest AFLW win.

Forwards Sophie Conway (nine tackles) and Zimmorlei Farquharson (eight tackles) also put in the work to chase the Eagles and keep the ball in the Lions' forward 50.

It was the day to be one of the Lions' forwards, as Jesse Wardlaw and Conway each booted three goals, leading the way for the attacking end.

Though, Courtney Hodder and 25-gamer Greta Bodey were also prolific, kicking two each.

Dakota Davidson, Tayla Smith, Svarc and Isabel Dawes, each hit the goal kickers list as well, contributing to the largest ever AFLW score.

Dana Hooker, Hayley Bullas and Imahra Cameron slotted a goal each for the Eagles, and Evie Gooch kicked her first in an Eagles jumper.

It was a tough battle out there for the Eagles, but Emma Swanson picked up 22 disposals and Bella Lewis finished with 17.

Hooker went down with a lower leg injury in the final quarter, further souring the big loss at home.

The West Coast Eagles will have another tough challenge on their hands when the club host the Western Bulldogs next Saturday night, while the Brisbane Lions return home to host North Melbourne next Sunday.

The Carlton Blues have taken the premiership points in Canberra, defeating the GWS Giants by 18 points.

As Carlton pushed ahead in the third quarter, Vescio slotted their second for the term to hit the milestone.

The even team performance was highlighted by Vescio's two goals, alongside Abbie McKay's pair.

In the Giants camp, Nicola Barr (17 disposals) and Alicia Eva (17 disposals, six clearances) were among the best for the home side. With limited opportunity, Cora Staunton still managed to snag two goals.

It was a tight and hard fought final term in which the Giants threatened to overtake the Blues, but they were unable to do so, the Blues holding on for two in a row.

The Carlton Blues host the Gold Coast Suns next Sunday afternoon and the GWS Giants will have a tight turn around to host the Richmond Tigers on Saturday.