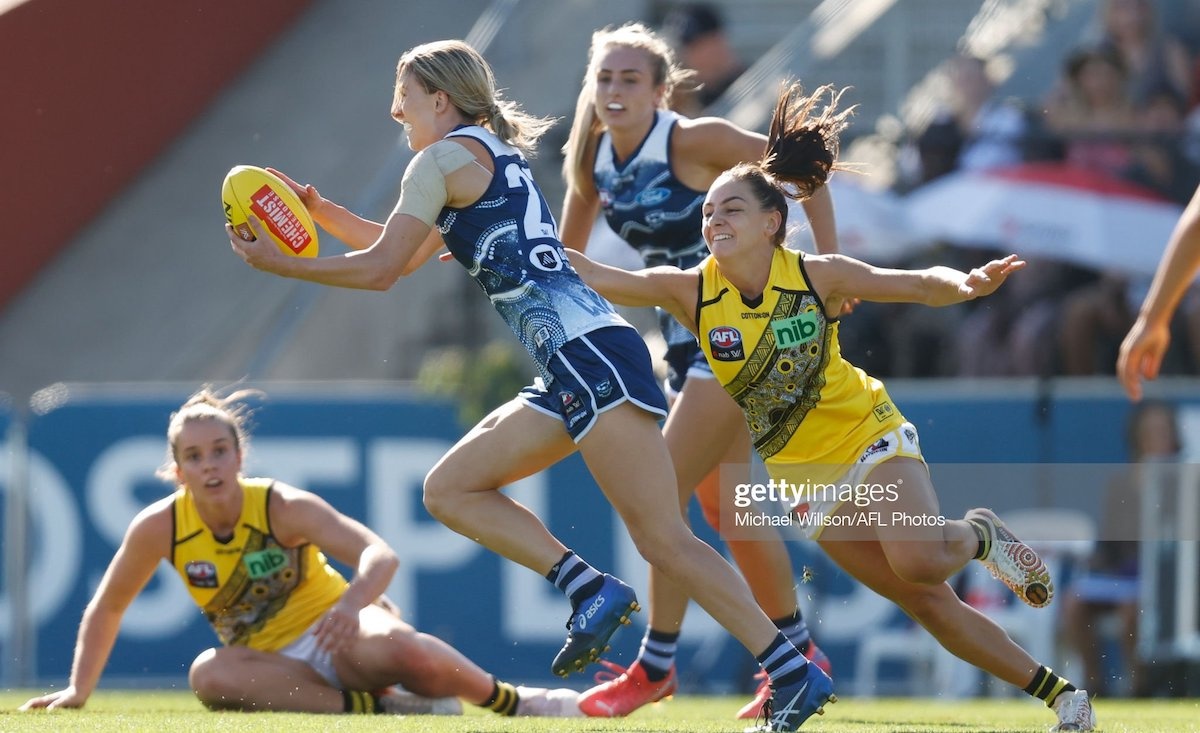 Round Eight action began on Saturday with a top of the table cash in the west, before four Victorian teams battled it out in two intriguing contests

Round Eight action began on Saturday with a top of the table cash in the west, before four Victorian teams battled it out in two intriguing contests

Round Eight AFLW action began on Saturday with a top of the table cash in the west, before four Victorian teams battled it out in two intriguing contests.

Adelaide continue to impress as a side to beat this season, but it'll be far happier with the second half than the first, as it ran over Fremantle for a nine point win.

A dominant second quarter gave Geelong the lead it needed to ride out a win over Richmond, while Melbourne has moved into second on the ladder with another win over North Melbourne in windy conditions at Casey Fields.

It was the Adelaide Crows who took the premiership points in their top of the table clash with the Fremantle Dockers. Holding their place at number one on the ladder, the Crows will be a force come finals if only they can sort out their goal kicking.

A nine point win was hard fought on a hot day in Perth and, although the home side brought the pressure, the Crows were the fitter team and ran away with it.

Adelaide's Danielle Ponter, a proud Maranunggu and Anmatjerre woman, kicked two goals in the Crows' Indigenous strip during Indigenous Round.

READ: Sarah Allan's thoughts on the victory and the club's position heading into the pointy end of the season

Geelong has produced one of its best performances this season to defeat Richmond by 23 points, thanks largely to a four-goal burst in the second quarter that set up the win.

Goals in quick succession to Kate Darby, Becky Webster, Phoebe McWilliams and Madisen Maguire gave the Cats a 28-point lead, which Katie Brennan cut back to 22 with the Tigers' first major for the afternoon just before the main break.

The Tigers came out after half-time with increased intensity, but both teams went goalless in the third quarter, unrewarded despite the hustle.

Amy McDonald (26 disposals, eight clearances, seven tackles) and Becky Webster (20 disposals, six tackles, one goal) led the way for the Cats with their attack at the contest.

Monique Conti picked up 23 possessions and was supported by Sarah Hosking (14 disposals, five tackles) and Meagan Kiely (13 tackles), though there weren't enough contributors for Richmond.

There were concerns for Cat Olivia Barber who was playing just her second AFLW game for 2022 after coming back from a knee injury. A strong mark in the fourth term resulted in her hitting her head on the ground, ending her afternoon early.

Before the incident she was in the thick of it with 14 disposals, eight hit-outs and five clearances, as well as 209 metres gained.

Richmond also had two injury concerns from the game, with Kodi Jacques limping off with a lower leg injury in the third and Tayla Stahl receiving treatment on her knee late in the piece.

Demons down Kangaroos to leap to second spot

The Melbourne Demons have secured another four premiership points with a 10 point win at Casey Fields, jumping to second spot on the standings, while the North Melbourne Kangaroos largely had themselves to blame, gifting goals to their opposition with 50m penalties.

The Kangaroos gave away at least three 50m penalties that resulted in two of the Demons' three goals to half-time. Their poor discipline will be something to look at on review, as the side pushes to hold a finals position in the final weeks of the regular season.

Melbourne led at every change, including a 17 point advantage at three quarter time. North Melbourne threw everything at Melbourne in the last term, getting a sniff with a goal of the year contender from Kaitlyn Ashmore, who curled one from the boundary.

However, it was the home side that held off the barrage with strong defence.

Tayla Harris got height over North's Jasmine Ferguson in what will surely be a Mark of the Year nominee for Round Eight. She also kicked two goals in a strong outing.

For the Kangaroos, Ash Riddell had 18 disposals by half-time, though her influence slowed as the match went on. Jasmine Garner was also among the best, kicking a goal alongside her 19 disposals and five clearances.

In the Melbourne camp, Karen Paxman (28 disposals) dominated on the wing racking up the possessions and Lily Mithen (27 disposals, six tackles) was busy throughout the evening.

Round Eight action continues on Sunday with four matches starting at 1:10pm AEDT for two contests in Melbourne, before we take a trip around the country with games in Perth and Sydney.