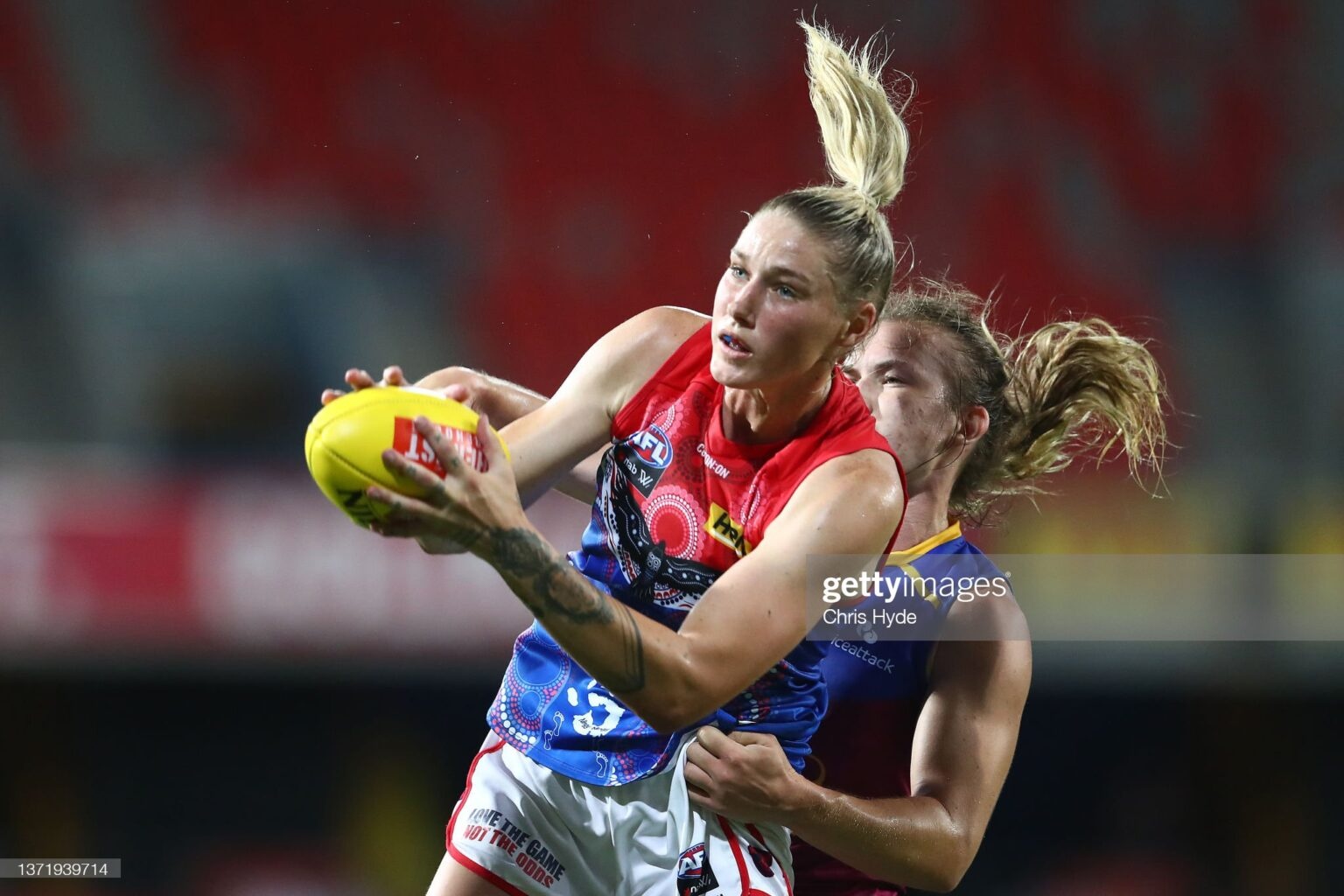 AFLW Round 7 Wrap: Blowouts, thrillers and everything in between

Round 7 of the 2022 AFLW season was filled with highs and lows as teams continued to navigate the abridged season, and the condensed fixture.

AFLW Round 7 Wrap: Blowouts, thrillers and everything in between

Round 7 of the 2022 AFLW season was filled with highs and lows as teams continued to navigate the abridged season, and the condensed fixture.

Round 7 of the AFLW season unfolded with the Gold Coast Suns as the bookends, and the favourites moving together in between as the season heats up.

The first match of Round 7 wasn't actually in Round 7. A rearranged Round 11 fixture brought the QClash forward, but it appeared that someone forgot to tell the Gold Coast Suns the match was on.

The Brisbane Lions jumped out to an early lead, after kicking the first three goals, and from there it was almost over before it began.

Orla O'Dwyer, Taylor Smith and Bella Dawes kicked early goals, as the Lions led by 19 points at quarter time. From there it only got worse for the Suns, as the Lions piled on another three goals in the second quarter.

The Lions piled on the pain, with nine different individual goalkickers, and the second largest winning amrgin in AFLW history.

Courtney Hodder was a star for the Lions, with 17 disposals, two goals and a goal assist, while Taylor Smith's three goals for the Lions would have stung the Suns, who delisted her after the 2020 season.

Late goals for Tori Groves-Little and Sarah Perkins were the only consolations in an otherwise disappointing outing for the Suns.

Bulldogs have enough bite for the Cats

The Western Bulldogs held off a fast-finishing Geelong Cats side to keep its winning streak alive, and take the club to its third win in a row.

Coming off the high of last week's thrilling win over the Adelaide Crows, the Bulldogs started fast, but were unable to capitalise.

Neither side could break through for a goal in the first quarter, as the Bulldogs dominated possession, and used the ball with efficiency (except in front of goal).

Bonnie Toogood had two goals, as the beneficiary of smooth ball movement from the defensive end for the Bulldogs, as Elisabeth Georgostathis was everywhere, as she had 23 disposals, six tackles, four inside 50s and a goal.

The Bulldogs will rue the chance to put the Cats away, as they kicked 3.10, and left the door ajar for the Cats, as Chloe Scheer and Phoebe McWilliams found the goals for the away side in the final quarter.

In the end, the two goals weren't enough to really trouble the Bulldogs, who held on for a 12 point win.

Crows rebound to thump the Giants

The Adelaide Crows bounced back from its tight loss to the Western Bulldogs last week and came out with a vengeance. Unfortunately for the Giants, that placed them firmly in the cross-hairs, and that wasn't a good thing.

The Giants struggled to pick past the Crows' defensive structure, with a spare Adelaide player always seeming to be on the end of the possession chain.

The Crows were clinical in the way that they broke down the Giants' attack, but were far less so in their own attack, making just 25 per cent of their shots count, as they finished with five goals and 15 behinds.

The Giants were kept goalless through the match, and scoreless to quarter time. In two matches since returning from a COVID-19 outbreak that swept through the squad, the Giants have scored one goal and six behinds, and had their lowest score ever against the Crows.

Ebony Marinoff became the first AFLW player to accumulate 1000 disposals, doing so in just 48 matches. Marinoff led from the front with 22 disposals and 16 tackles for the Cows.

READ:MCCONNELL LOOKING AT THE POSITIVES AFTER DISAPPOINTING LOSS TO THE CROWS

KEY LEARNINGS FOR CROWS SAYS MARINOFF, AS BULLDOGS HANG ON IN A THRILLER

Carlton give St Kilda the Blues

The Carlton Blues came out firing against St Kilda, as the club broke its four-match losing streak in style.

St Kilda started fast, with an early mark in the opening seconds, before the shot faded right. The Saints put a second behind on the board, but from there, it was all one-way traffic.

Georgia Gee starred for the Blues as she cut through the Saints midfield with 20 disposals. Alongside her was Mimi Hill, who continued her strong return from injury with 17 disposals in her third game back from an ACL reconstruction.

Darcy Vescio returned to strong form, with two goals, drawing within two of the 50 goal milestone that is yet to be breached by any AFLW player.

The Saints continue to be hit hard by injury, and haven't won a game this season. They will face a short week, with two matches before the end of next weekend, and will hope to arrest a six-game slump.

It turns out Tigers can travel

The Richmond Tigers were a long way from home as they travelled to Perth to face the West Coast Eagles, but the travel didn't seem to affect the team.

The Tigers have played well at times this season, but haven't been rewarded for effort, with five losses since their breakthrough win against the Saints early in the year.

Monique Conti continued her push for the best and fairest medal, as she led the way for the Tigers with 24 disposals, five clearances and a goal.

She was able to help Tayla Stahl kick three goals, and Katie Brennan two, as the Tigers piled on their biggest score for the year.

The Eagles also picked their biggest score for the year, as Aimee Schmidt kicked a right foot snap in the fourth quarter.

Emma Swanson will hold her head high, as the Eagles captain, with a game high seven inside 50s, and 12 disposals.

Kangaroos beat the Magpies in a Melbourne matchup

The Kangaroos continued a push for the minor premiership as they accumulated their fifth win in a row. A powerful display against Collingwood with a fast start, putting two goals on the board in the first term.

Jasmine Garner was out to prove a point against her former side, as the North Melbourne star had 26 disposals, six marks and three goals in one of the most complete performances of the season.

Ash Riddell (29 touches), Emma Kearney (24 disposals) and former Magpie Emma King (20 disposals) starred for the Kangaroos in a strong performance through the midfield.

Collingwood looked to be feeling the effects of its long road trip to Perth last week, and just didn't have the energy to hit the contest at the same energy.

The Magpies fought hard, but were unable to bridge the gap, as they went down by 23 points in the end.

The Brisbane Lions jumped out to a fast start, with a 23 point lead late in the second quarter, before the Melbourne Demons scored.

Despite playing on Thursday, the Lions started fast, as O'Dwyer, Sophie Conway and Greta Bodey all scored goals in the first half.

The Demons fought back, with Tayla Harris starring with three goals against one of her old sides. Harris finished with two goals, and an AFLW-record seven contested marks.

Harris goaled early in the last quarter to set up a dramatic finish, as the Demons led in the dying stages.

Karen Paxman was key in the second half, with 23 disposals, and 413 metres gained as the Demons had the largest successful AFLW comeback in the league's history.

In the end, the Lions ran out of puff, feeling the effects of the previous game, as Greta Bodey's set shot fell short in the dying moments, handing the Demons the win.

The Gold Coast Suns jumped out to an early lead, and held it, with a 24 point lead at three quarter time, before it all came crashing down.

Sarah Perkins had one of the highlight goals of the season, taking advantage of a vacant goal square to kick a drop punt from the edge of the centre square.

Despite the Suns' hot start, the Bulldogs were determined to come back from the brink in the last quarter. Nell Morris-Dalton started the comeback.