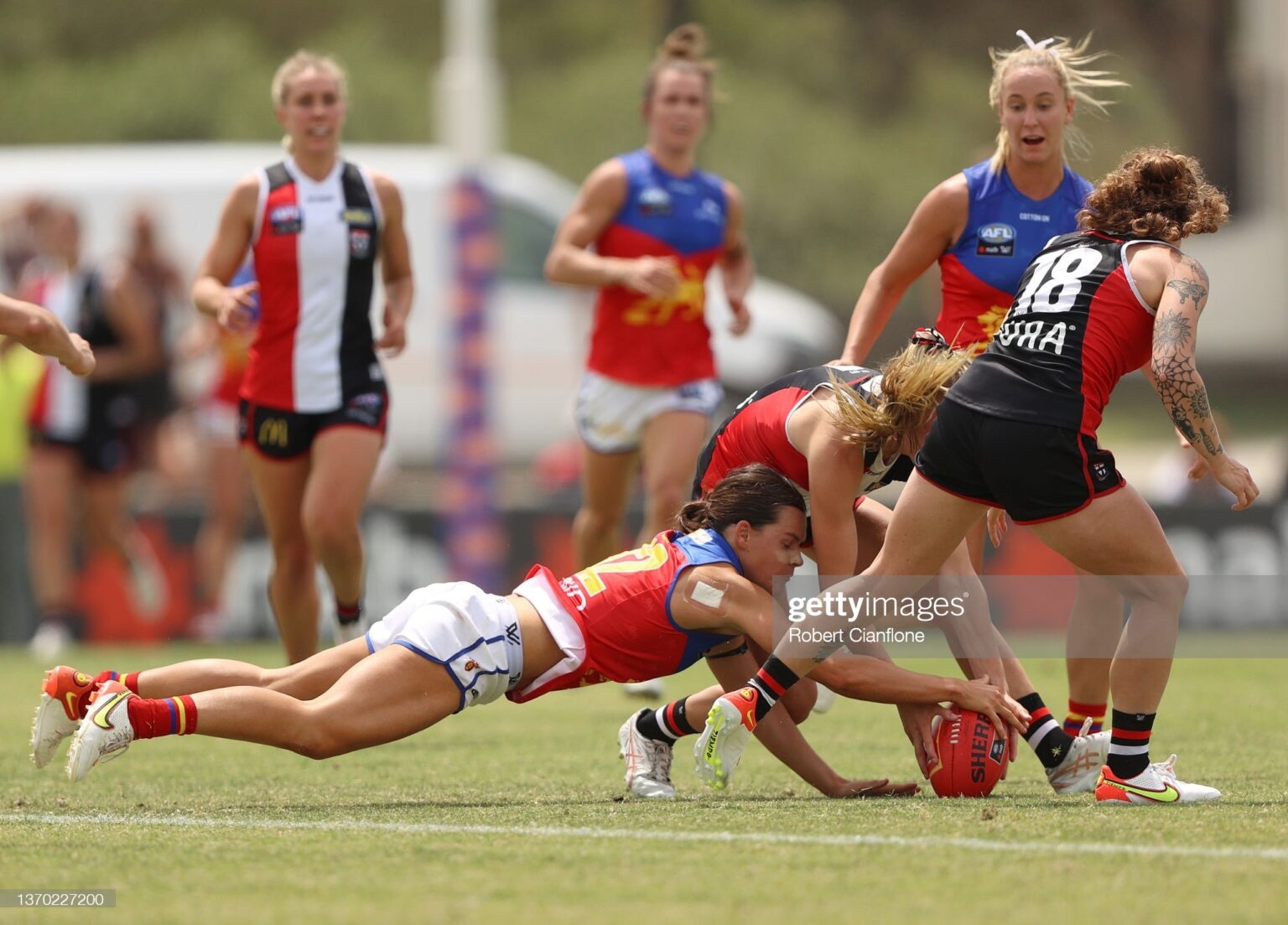 AFLW Round 6: The Sunday Wrap

Round 6 of AFLW continued with two thrillers for the 2021 grand finalists, and mixed endings for each of them, as Round 6 wrapped up.

AFLW Round 6: The Sunday Wrap

Round 6 of AFLW continued with two thrillers for the 2021 grand finalists, and mixed endings for each of them, as Round 6 wrapped up.

Round 6 of the AFLW season continued with thrillers, as the Lions went head to head with the Saints, the Magpies did battle on the Eagles home deck, and the Bulldogs and Crows played out a thriller.

The first half of the round was gripping, catch up on all the action from the first four matchups.

READ:AFLW ROUND 6: THE ROUND SO FAR

Windy conditions played a big part of the matchup at Trevor Barker Oval, as the St Kilda Saints looked for their first win of the season.

The Brisbane Lions started hard but were unable to kick straight, starting with 11 consecutive behinds to start the match.

Nicola Xenos had her best game of the year, coming back from an ACL injury that caused her to miss all of 2021. Xenos bobbed up to open the scoring for the Saints, kicking their first major in the opening moments of the match, and she added a second just before quarter time.

The Lions started to get on top, with seven more inside 50s at halftime, but the scoreboard wasn't reflective of that, as had 9 behinds, to St Kilda's two goals and a behind.

The signs were there, and when debutant Luka Yoshida-Martin kicked the first goal for the Lions, the floodgates opened.

While the Saints fought hard, with goals to Tilly Lucas-Rodd and Caitlin Greiser kicking late goals to make it close, the Lions held on, as Bre Koenen and Nat Grider marshalled the Lions defence.

In the end, the weight of scoring shots reflected the win, but the Lions will be counting their blessings after almost spraying the win with their kicking.

Not so happy homecoming for Eagles against Magpies

The West Coast Eagles were thrilled to be back in Perth, but it didn't show early, as they were held goalless to quarter time, for the fifth time in six matches.

The Magpies had lost two games in a row coming into the road trip and had failed to kick more than one goal in each match. By quarter time, Chloe Molloy and Sophie Alexander made sure that wasn't a concern this time, putting two on the board early.

The Eagles fought hard and refused to give in, as they kept the Magpies goalless through the second term, and Niamh Kelly found the goals herself to bring the Eagles to within a goal.

It wasn't to be though, as Collingwood found another gear, kicking four straight goals in a vicious burst to take the game away from the Eagles. Molloy and Alexander each added another, and Mikala Cann and Amelia Velardo chipped in as well.

Despite the Eagles pushing, Dana Hooker's and Imahra Cameron's goals were not enough, as Britt Bonnici kicked the sealer for the Magpies.

The Eagles will enjoy an extended stay in Perth, while the Magpies will head to Hobart for a clash with the Kangaroos next weekend.

The Western Bulldogs started fast against the Adelaide Crows, before suffering injuries that left them short-handed.

As the match wore on, they fought hard as the Adelaide Crows mounted a fierce comeback. The final minutes of the match was gripping, as the Bulldogs hung on for an exciting win.

READ:KEY LEARNINGS FOR CROWS SAYS MARINOFF, AS BULLDOGS HANG ON IN A THRILLER