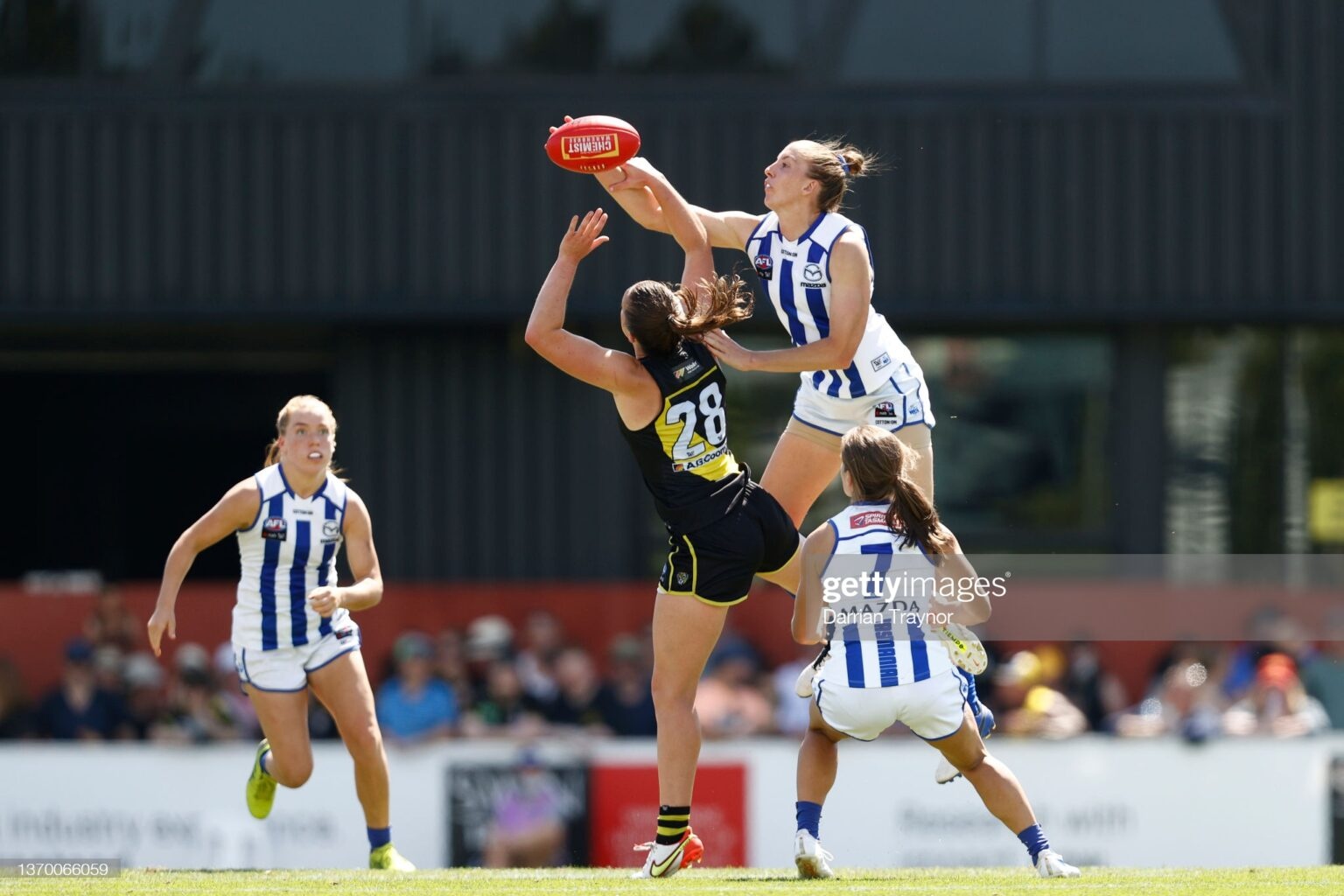 AFLW Round 6: The round so far

Round 6 of the AFLW kicked off with Friday Night Football at Metricon Stadium, a novelty, before the heavyweight contenders marked their authority.

AFLW Round 6: The round so far

Round 6 of the AFLW kicked off with Friday Night Football at Metricon Stadium, a novelty, before the heavyweight contenders marked their authority.

Round Six of the AFLW has been a homecoming of sorts, with big results all around, as football returned to Western Australia.

With big wins in Western Australia, Queensland and Casey Fields, it has not been a round for upsets.

The Gold Coast Suns showed exactly how far they have come in a short time, as they took on Geelong at Metricon Stadium. After going winless last season, the Suns are in the box seat for finals with three wins.

Geelong jumped out to an early lead, but Gold Coast fought back, kicking five goals to one between quarter time and three quarter time.

Alison Drennan led the way as the Suns' midfield dominated, with 36 clearances to 20. Drennan had 30 disposals, breaking her own record for the most disposals by a Gold Coast Suns player.

The Suns used the expanses of their home ground to show off their running power, as Charlie Rowbottom went head to head with Georgie Prespakis, as the cream of the 2021 Draft battled.

While Sarah Perkins wasn't amongst the goals, but got to celebrate her 30th AFLW game with a win, which would have mattered to the journeywoman far more.

Tori Groves-Little returned from concussion and showed off their speed, latching on to a loose ball in the forward line to kick their first and second AFLW goals.

The Suns will back up their 49-38 win with the QClash on Thursday night, while the Cats will attempt to bounce back against the Western Bulldogs on Friday night.

Kangaroos bounce the Tigers onto their losing streak

North Melbourne continued its four-game winning streak against a determined Richmond Tigers outfit. After a hard-fought first quarter, Tahlia Randall scored the opener for the Kangaroos.

Monique Conti singlehandedly kept the Tigers in the contest, with 24 disposals and a key role, linking the midfield with the ball into the forward 50.

Emelia Yassir and Katie Brennan were both dangerous, and each chipped in a goal. Brennan's goal kept her 12 match streak with a goal alive.

The Kangaroos' midfield had no trouble finding the ball, with Ash Riddell accumulating 30 touches, captain Emma Kearney had 21 disposals, and Jasmine Garner had 26 touches and five tackles.

The match was close until late in the third quarter, as Sophie Abbatangelo and Daria Bannister goaled late in the term. The fourth returned to the hard-fought struggle, but the buffer created was enough to carry the Kangaroos through.

WHAT THE RUCK – PREVIEWING ROUND SIX

Tayla Harris and Kate Hore starred for the Demons, dominating play and on the scoreboard.

Fremantle arrive home, and back in form against Carlton

Fremantle enjoyed being home after 23 days in a Victorian hub, and bounced back from its first loss of the season.

The first quarter started with an arm wrestle, as Darcy Vescio snapped truly to open the scoring. Unfortunately for the Blues, it was the only goal for the afternoon.

As the match wore on, the Dockers were invigorated by being home, and started to get on top of the Blues, as Mikayla Morrison kicked three goals, and captain Hayley Miller accumulated 24 touches and eight clearances.

Nine of Miller's touches came in the third quarter, as the Dockers went on a five goal run to take the game away from the visitors, and Ebony Antonie finished the game with her nomination for Mark of the Year with a spectacular grab.

While a back injury to Maddy Prespakis will be a concern for the Blues, teenage midfielder Mimi Hill continued her return from an ACL injury with a game-high 25 disposals.

The Blues will next face the West Coast Eagles, while the Dockers have a bye, and will get Kiara Bowers back from suspension for their next match.