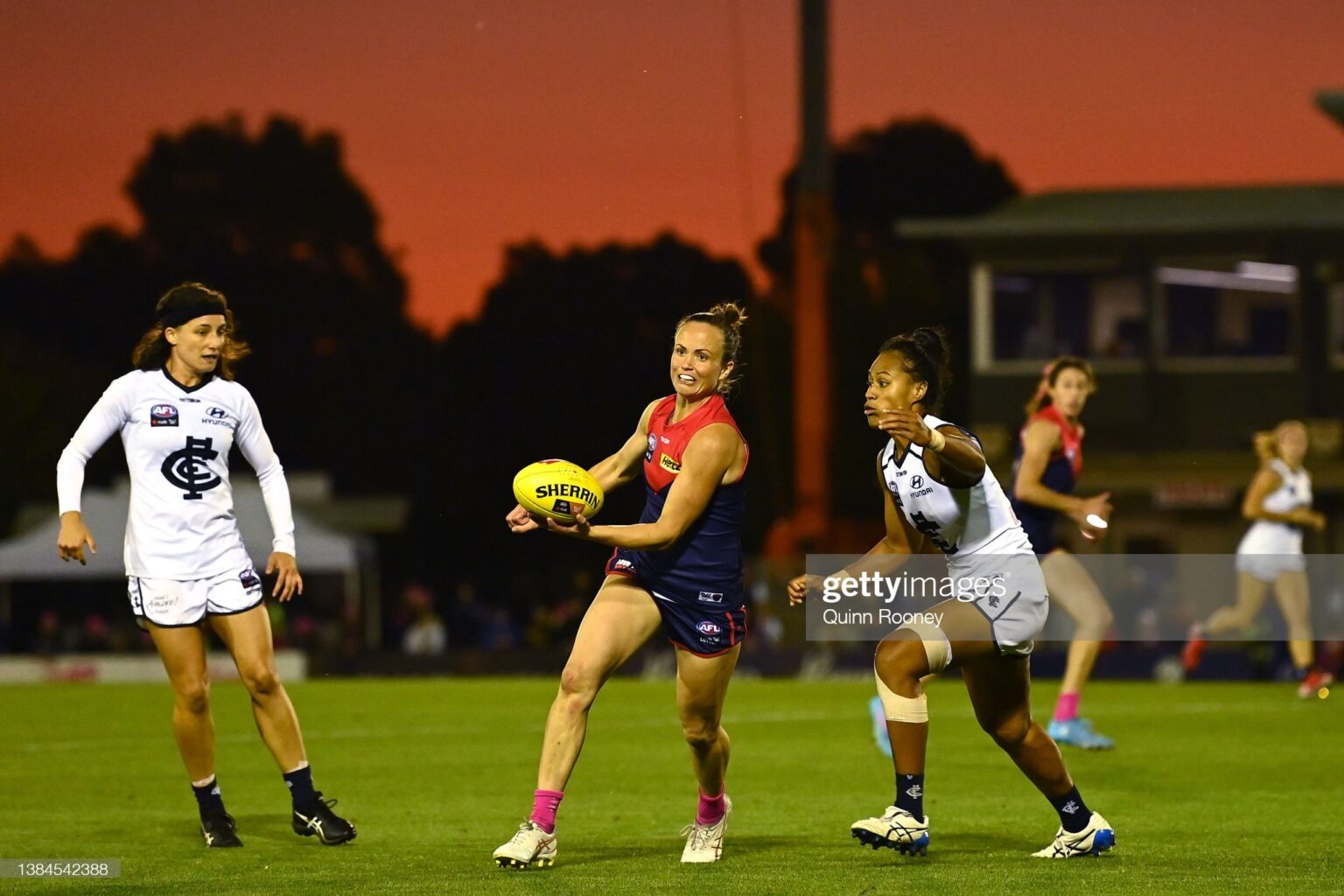 AFLW Round 10 Wrap: Home and Away season comes to an end

Round 10 of the AFLW season brought the first 2022 Home and Away season to a close in thrilling fashion, as finals awaits.

AFLW Round 10 Wrap: Home and Away season comes to an end

Round 10 of the AFLW season brought the first 2022 Home and Away season to a close in thrilling fashion, as finals awaits.

Finals beckon for six AFLW teams, as Round 10 marks the end of the season for eight sides. Catch up on the action from the weekend ahead of a gripping final season.

The Giants were led by Erin McKinnon, who set an AFLW record with 47 hitouts, and Alicia Eva working well at her feet. The Giants midfield were beaten by the Geelong midfield, as Amy McDonald and Georgie Prespakis starred for the Cats.

Despite that, the Giants were very efficient going inside 50, as they stayed in the contest while the Cats started well.

Geelong led by a point at half time, before Jess Doyle chipped in two third-quarter goals, and Cora Staunton had two fourth quarter goals as the Giants skipped away.

Staunton's final goal, in the dying moment of the match, put the finishing touches on the 18 point win and put her equal on the goalkicking tally for the year at the time.

The Giants will take comfort in finishing the year with a 53-35 win, and will hope to reset for a better season when the next season commences.

The Collingwood Magpies locked in a spot in the finals for this season, as they comfortably accounted for the Richmond Tigers in a 38 point win, 47-9.

Both sides were missing key parts of their midfield, with Bri Davey and Brit Bonnici missing for the Magpies, and Tessa Lavey and Sarah Hosking out for the Tigers.

Despite the short-handedness, the Magpies were able to get their game going. Their defensive end, with Ruby Schleicher and Lauren Butler putting in strong performances in the defensive half.

Schleicher was particularly damaging, as Richmond felt the absence of Katie Brennan, and had nobody to force Schleicher to be accountable.

In the end, the Tigers were unable to get anything going, with three behinds in the first term, and a lone goal to Emelia Yassir midway through the third quarter.

Conversely, the Magpies looked to be starting to work out how to deal with the absence of Bonnici, as different players ran through the middle, with Steph Chiocci and Jamiee Lambert (31 disposals, eight tackles) dominant for the Magpies.

Chloe Molloy and Sabrina Frederick also chipped in a goal each, as the Magpies started to turn one eye to the finals race.

North Melbourne halted a two-match losing streak with a thumping win over the West Coast Eagles to find form before finals in a 59-20 win to end their home and away season.

Ash Riddell was the star of the show, accumulating a new AFLW-record 42 disposals in the match, smashing the previous record of 35, which she held jointly with Adelaide's Ebony Marinoff and Anne Hatchard.

The Eagles jumped out to a quick start with two early goals, but that was as good as the afternoon got for them, as they didn't score again until the final quarter. It marks the end of a disappointing campaign for West Coast.

Travel restrictions and injuries have had a big impact on the young team, which ended up losing its last three matches by a combined 173 points, to seal the wooden spoon.

Emma King arrested the Eagles' momentum with two first quarter goals, as Daria Bannister, Jasmine Garner and Tahlia Randall joined her in the multiple-goalkicker club as the Kangaroos cruised to a huge win.

Demons give Carlton the Blues in thriller

Despite being out of the finals race, the Blues didn't give up, and gave the Demons an almighty scare in the final round of the AFLW season.

Melbourne was unable to get its free-flowing playing style going as Carlton played a relentless brand of football.

After a relatively fast-paced and attacking first half, the second half ground to a defensive battle, with a lone Carlton second half goal not enough to steal the win.

Tayla Harris was held goalless for the first time this year by her old side, as forward partner Daisy Pearce proved to be the difference. Pearce kicked two key goals for the Demons to set up the winning score.

In the end, she was thrown down back as a cool head under pressure, and kept the game in check for the Demons, including the final kickout as the siren sounded.

Pearce's kickout came after superstar Blue Darcy Vescio was unable to hit a late goal from the boundary line, with their shot being punched over for a behind, instead of the winning goal.

The Adelaide Crows came out firing with a big win to seal the top spot and secure a week off next week. Ash Woodland was one of the stars of the match, as she sealed the goalkicking title for 2022 with a big performance in the final round.

The Brisbane Lions flexed their muscles to secure a home game next weekend with a comfortable 32 point win over the Western Bulldogs.

The Lions were too quick for the Bulldogs defence, as Courtney Hodder, Orla O'Dwyer and Zimmi Farquharson proved too quick to handle. Greta Bodey was also a handful, as she, O'Dwyer and Sophie Conway each bagged two goals.

The fleet-footed brigae was crucial, with 15 tackles inside forward 50 to match a dominant 39 trips inside the forward arc for the Lions.

The Bulldogs were left to try and slow the game down, by playing a possession style of play. It worked to an extent, as they tallied 33 marks to the Lions' five in the first half, and were just a goal behind at the main break.

The Lions came out of the blocks in the second half, piling on five goals to none, with seven individual goalkickers chipping in for the Queenslanders.

Emily Bates continued her strong form, as she pressed her chances for the competition's best and fairest award, with 18 disposals, 11 clearances and 12 tackles - a triple-double of sorts.

Dockers smash Suns to end home and away season

The Fremantle Dockers came into the day knowing that a big percentage boost was needed to steal a home final away from North Melbourne, and the Gold Coast Suns were unlucky enough to have drawn the trip to Perth in the final round.

Kiara Bowers marked a successful return to football after a knee injury, as she had 18 disposals and 17 tackles in a ferocious effort.

The Suns, while much-improved this season, with three wins and a draw, were no match for the Dockers, and were held goalless for the match, finishing with nine behinds, to the Dockers 46 points.

Alison Drennan continued her brilliant year for the Suns, as she had 25 disposals, and was ably supported by Kalinda Howarth (19 disposals).

Gemma Houghton was the opening goalscorer, before the Antonio sisters (Kara and Ebony) each chipped in a goal, as the Dockers looked to make up the point differential.

In the end, it was a bridge too far and they fell 4.1 percentage points short of a home final. It leaves them three consecutive away wins from a maiden premiership.