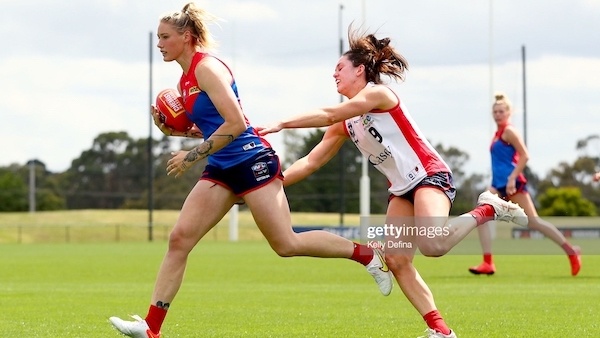 There were post-season moves across the AFLW, Edge of the Crowd's Aussie Rules writers look at some of the familiar faces at fresh clubs in 2022.

There were post-season moves across the AFLW, Edge of the Crowd's Aussie Rules writers look at some of the familiar faces at fresh clubs in 2022.

There were post-season moves right across the competition after the Brisbane Lions won the 2021 AFLW Premiership, so who are the players to watch in new colours this season?

Brisbane's marquee players from the very first season, Sabrina Frederick and Tayla Harris have landed at their third clubs, while JessHosking joined her twin Sarah at Richmond and Geelong lost one young talent but gained another.

With just one day to go until Round 1 gets underway, the Aussie Rules writers fromEdge of the Crowdtake a look at some of the AFLW players who have moved clubs and why they are the ones to watch in 2022.

Sabrina Frederick was one of the big movers during the 2021 trade period, jumping across to Collingwood from Richmond, which could be the missing piece in Collingwood's search for a premiership.

While she's a strong player overhead, Frederick also has the ability to bring the ball to ground for one of the small forwards to grab - something that Collingwood has been missing since joining the competition in 2017.

Frederick has started her career in the black and white with a bang, kicking three goals in the club's practice match against Melbourne, showing signs that she’s back at her best.

The Magpies will be Fredrick's third AFLW club, having started her career at Brisbane before becoming a marquee signing for Richmond when they joined the competition in 2020.

As one of the most exciting emerging forwards in the competition, she could help Geelong’s scoring woes.

In her 15 games, she has kicked 13 goals and added explosiveness to the Crows’ forward line. She presents herself as a genuine marking forward with strong leading patterns, accurate goal kicking and clean hands, despite her size.

While her best football is played in the forward 50, she also hopes to bring grunt and her natural contested game to the Cats’ midfield.

Regardless of where she plays, she’ll have an instant impact at Geelong, providing experience and covering the departed Olivia Purcell.

After a frustrating 2021, Tayla Harris looked for a fresh start, departing Carlton over the offseason landing at Melbourne who is looking good to go all the way in 2022.

Harris will join the likes of Kate Hore, Krstell Petrevski and Tyla Hanks up forward, and will fill the hole left by two-time club leading goalkicker, Tegan Cunningham, who retired at the end of the 2021 season.

At her best, Harris is powerful in the air. When she’s at full strength there aren't many things defenders can do to stop her from taking the mark and she is extremely dangerous inside fifty. It's a scary thought adding her into Melbourne’s already dangerous forward line.

Melbourne will be Harris’ third AFLW club, after being a marquee signing for the Brisbane Lions in the club’s inaugural season, before making the move to Victoria to join Carlton.

After starring for the Blues, finishing second in the club’s Best and Fairest Awards in her second season on the full list in 2020. The powerful midfielder stepped away from the sport in 2021 to pursue an Olympic berth as part of the Rugby 7s team for the Tokyo Olympics.

Dalton’s dream was dashed with a fractured cheekbone a few weeks out from the Games, and Dalton moved to GWS Giants on her return to Sydney following that injury.

Dalton has averaged 11 disposals and 3.4 tackles per game in her career so far. Her physicality, drawn from her Rugby career makes her a key cog in the Giants midfield, and she will be hoping to increase her clearance numbers, from a 1.6 per match career average.

Dalton has also been elevated to the leadership group at the Giants in her first season with the Club.

Dalton isn’t the only former Blue who has crossed to GWS Giants for 2022, as part of the mega-trade at the end of last season. Fellow midfielder Katie Loynes was delisted by Carlton after the 2021 season and has moved up the Hume Highway as well.

Loynes racked up 36 games for the Blues over her career, averaging almost 5 tackles each game as an enforcer for the Blues. Loynes is another leader, who has made an impact with the Giants already, after being a co-captain at Carlton over 2020 and 2021.

Loynes will bring more experience and class under pressure as the Giants prepare for a tilt at an AFLW premiership for the first time.

Loynes’ chemistry with Dalton will add an extra dimension to the Giants’ midfield as the team looks to improve on a ninth-place finish last season. Combined with Alyce Parker and Alicia Eva, the Giants midfield will be more powerful than it has been in previous years.

It was a move that left many shocked, with Jess Hosking making the move to Richmond a season after her twin sister Sarah made the same switch.

Hosking had been with Carlton since the club's first season in 2017, although was ruled out of that first year due to injury, making her AFLW debut in Round 1 2018 against Collingwood.

Hosking is versatile and can play many roles, as shown during her time at the Blues. She spent some time in the middle and at half back for the Blues, but will more than likely find herself down in defence at the Tigers.

In 2021, Hosking averaged 13 disposals and three tackles, and her defensive pressure is a huge plus to her game.

Although she brings more than just her on-field expertise, with lots of experience and strong leadership, she will be an asset to the club's culture and vital in developing the next wave of Richmond AFLW players.

Former Fremantle defender Evangeline Gooch signed with cross-town rivals West Coast in the 2021 trade period and is set to fill a gap in its defensive set-up.

Originally Perth Glory’s reserve goalkeeper, Gooch joined Freo in 2017, where she played 23 games across four seasons. Her defensive instinct learned from being a goalkeeper has incorporated itself into her game, making her a valuable asset and a fierce competitor.

Gooch was a key defensive pillar at the Dockers’, especially in their unbeaten 2020 season. She will play a similar role at the Eagles, providing experience in a youthful backline.

In the practice derby, she looked to have settled in well, doing well to thwart a potent Fremantle forward line.

There are a few familiar faces at West Coast, as she joins former Dockers like Dana Hooker and Parris Laurie, and fellow firefighter and skipper Emma Swanson.

Maddie Shevlin is another player who has made the move just down the road to the Richmond Tigers, looking for a new opportunity in 2022 at her third AFLW club.

Originally rookie-drafted to Melbourne in 2017, Shevlin played 13 games for Collingwood before she departed in a trade that saw her move to Richmond, while Sabrina Frederick headed to the Magpies.

The athleticism and pace of Shevlin will likely see her play a role in the Richmond half-back line, to help the side rebound from their defensive 50 - a position Richmond found itself in plenty of times during 2021.

She’ll also provide the classy skills the Tigers need to find their targets as they set up play in their forward half.

Shevlin looks to be thriving in the new environment and will be wearing the number 35 this AFLW season.

Dual-athlete Elle Bennetts has returned home to Victoria ahead of the 2022 season, joining the Western Bulldogs.

The Victorian Fury netball player was rookie drafted ahead of the 2018 season by the Giants, having never pulled on a footy jumper before.

She immediately impressed with her run, something the Bulldogs will look to utilise on transition, and her foot skills, which will help pinpoint targets inside 50.

In just four years Bennetts has perfected the skills and become a classy player, she averaged 15 touches and played all nine games last season.

She is a versatile athlete, who will no doubt play various roles in the Bulldogs line-up. However, they see her having a significant impact in the midfield, mixed with some time in defence.

The Bulldogs will also value her skills and experience off the footy field as a teacher, the 32-year-old keen to help the next group of young talent breakthrough.

AFLW FIXTURE UPDATE: DERBY AND GRAND FINAL RE-MATCH IN ROUND 1

FIVE THINGS WE LEARNED FROM THE AFLW PRE-SEASON DERBY

Olivia Purcell made a difficult decision at the end of the 2021 season. She left a team she knew, a club where she was named best and fairest as a teenager, and now she commutes up the highway from Geelong to train and play for Melbourne.

Purcell is a class midfielder, who pushes forward, and was a shining light for the Cats across three unsuccessful seasons, including a fourth-place finish in the club’s best and fairest last year when she sat out the final four rounds.

Purcell is still rehabilitating her right knee after rupturing her ACL in late February 2021. She is making progress and while she won’t be out on the field in Round 1, there’s hope that she’ll feature later this season for Melbourne.

Melbourne is going all-in for the premiership this year and, should she be fit in the back half, this star will slot straight in.

Jasmine Grierson will start for her third AFLW club in 2022, as she lines up for the GWS Giants. Drafted by Melbourne, before moving to North Melbourne, the key defender was traded across the NSW/Victorian border at the end of last season.

Despite being just 23, Grierson has already played 32 games at AFLW level since the inaugural season and will add another cool head to the GWS Giants’ defence.

Last year, the Giants struggled early on in the season, conceding 120 points across their first two games. On two other occasions, they conceded seven goals. For the Giants to improve in 2022, the defence will need to be more sturdy, and Grierson will add to that ability.

Grierson has long been recognised as one of the best young defenders in the competition, after being named in 2020 in the inaugural #22Under22 Team on the bench.

Delisted half-back Phoebe Monahan was poached by the Brisbane Lions in the 2021 off-season to help fill an Emma Zielke sized hole in the Lions’ backline.

After quarantining in October, Monahan joined the side in its pre-season preparations and from every report has been up for the challenge of the new club, the Queensland heat and the game style of the Lions’ back half.

The former Richmond Tiger is a reliable defender, who is clean with her hands, and will have an important role in the Lions’ rebound out of defence.

During the practice game against the Gold Coast Suns, Monahan showed her experience and composure, which impressed Lions’ coach Craig Starcevich.

Monahan will be at her third AFLW club, initially picked up by the GWS Giants in the 2017 NAB AFLW Draft and then signed by the Tigers when they joined the league in 2019.

Jessica Dal Pos has made the opposite move to Dalton and Loynes and has moved from GWS Giants to Carlton ahead of the 2022 AFLW season.

After starring for the Giants in the first five seasons of the competition, Dal Pos has previously been named All-Australian.

Dal Pos will add hard running and silky skills in navy blue, and is expected to play off the half back line and through the midfield. She was also in the Giants’ leadership group for years, and leadership skills will be invaluable.

After missing composure in defence at times last season, the Blues will be hoping that Dal Pos is the missing piece that allows them to compete for a premiership in 2022. She will combine with players like Daisy Walker and Charlotte Wilson who will only be better for Dal Pos’ experience around them.