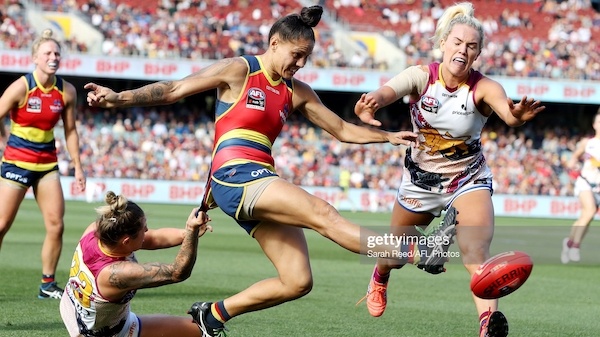 AFLW fixture update: Derby and Grand Final re-match in Round 1

The AFLW has adapted to current border closures, rescheduling the WA Derby and Grand Final re-match for Round 1, among seven adjustments ahead of the season.

AFLW fixture update: Derby and Grand Final re-match in Round 1

The AFLW has adapted to current border closures, rescheduling the WA Derby and Grand Final re-match for Round 1, among seven adjustments ahead of the season.

The AFLW has been forced to make seven changes to its season fixture just a week out from Round 1, with the WA Derby among the matches altered due to the current border restrictions on entry into Western Australia.

The adjustment will allow the pair of West Australian teams to face each other in the WA Derby at Fremantle Stadium on Saturday evening, before they travel east to Melbourne for the next block of games until borders re-open.

It means the Adelaide Crows and Brisbane Lions will face off in the highly anticipated Grand Final re-match in Round 1, instead of its original placement hidden in Round 8.

Fremantle Dockers and West Coast Eagles will both host home games at VU Whitten Oval, as part of a blockbuster doubleheader on Sunday in Round 2.

The Eagles will host another 'home' game in Melbourne, with Richmond lending their Punt Road Oval for a match against the Adelaide Crows in Round 3.

They've also been given home games in Round 8, when the Derby was originally scheduled; West Coast will host Brisbane and Fremantle will host Adelaide on Saturday and Sunday, respectively.

READ:Five things we learned from the AFLW pre-season Derby

You won't want to miss it: GF re-match brought forward

Initially scheduled for Norwood Oval on a Sunday afternoon in late February, the match every Crows player had circled in their diaries for 2022 has been brought forward.

Seeking revenge for a three goal loss to the Lions in the 2021 AFLW Grand Final, the Crows will be hunting that first win of the season when they host at Flinders University Stadium, Noarlunga.

In 2021, it was the Lions who were too strong on the day for the Crows. They kicked two goals in the second quarter and three in the third, before holding off a late attack from the Crows to win.

The two teams have strong squads this season, but only the Lions have had a proper 'practice match' before Round 1. The Crows' practice game was cancelled in mid-December.

While it demolished Gold Coast by 61 points, Brisbane will be in a much better position for the hit-out, even if it ended up as more of a training drill.

Adelaide is a side that has become known for turning up and turning it on, and continues to be one of the best clubs in the competition, making this a must see in Round 1.

If there's one match you should catch in the opening round of the sixth edition of the AFLW, it's this one. The Grand Final re-match between the Adelaide Crows and Brisbane Lions is on Sunday, January 9 at 2.10pm AEDT (1.40pm local time).

Updated fixture for Round 1, Round 2, Round 3 and Round 8. Source: AFLW Twitter

Speaking about the changes to the fixture, AFL General Manager of Women's Football Nicole Livingstone said the early tweaks to the fixture provide additional certainty heading into Round 1.

"We’re really looking forward to the season kicking off next Friday night in what shapes up to be a blockbuster opening round," Livingstone said.

"With this fixture update, Round 1 will now see a WA Derby at Fremantle Oval and a re-match of the 2021 Grand Final between the Adelaide Crows and Brisbane Lions at Flinders University Stadium.

"We continue to work closely with each stakeholder to ensure the best possible outcome for everyone in the game."

Gold Coast says each positive case is fully vaccinated and either asymptomatic or experiencing mild symptoms.