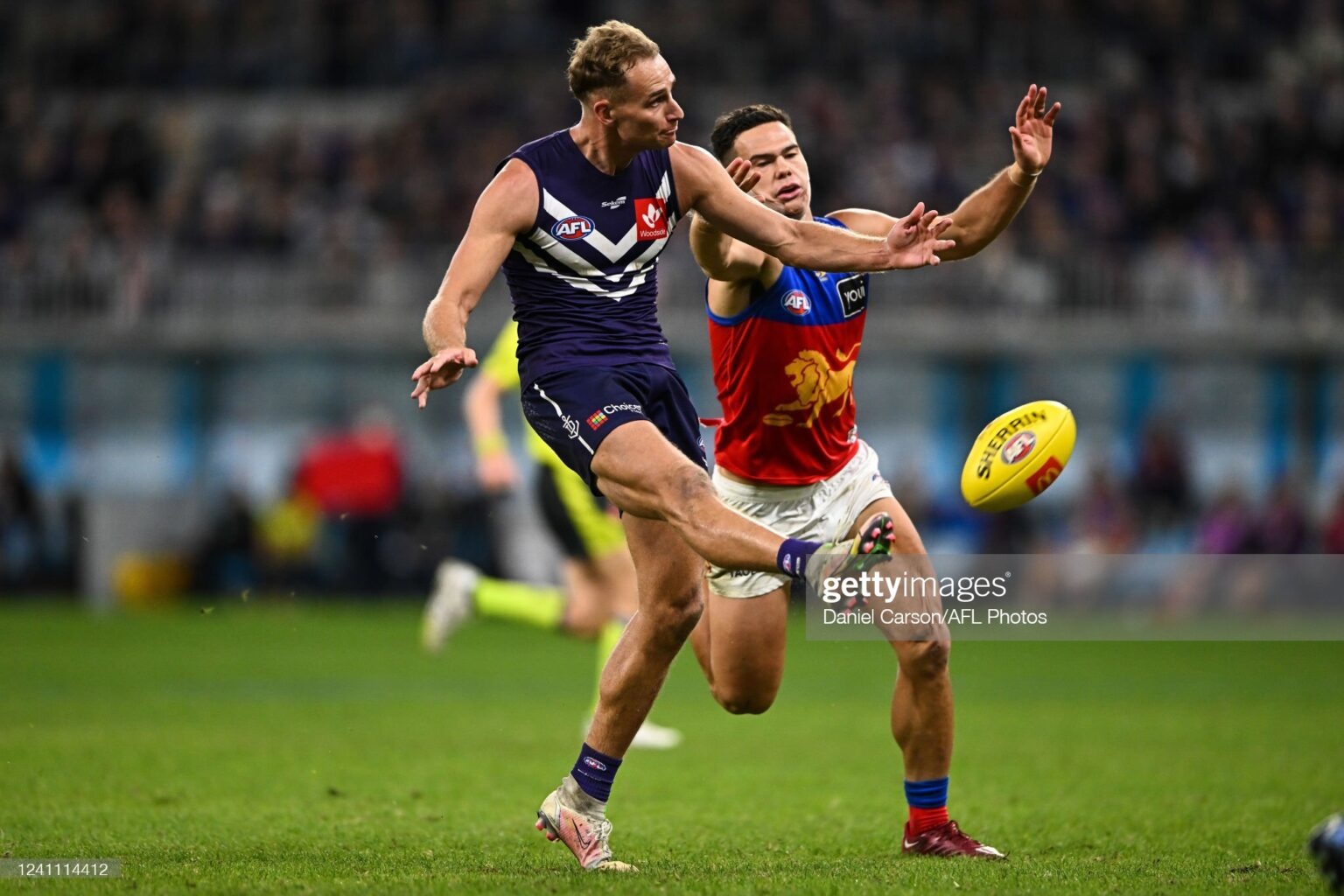 After Round 12 of the 2022 AFL season, the byes are here, and its time to see how your team fared in this week's Power Rankings.

After Round 12 of the 2022 AFL season, the byes are here, and its time to see how your team fared in this week's Power Rankings.

With the bye rounds hitting in Round 12, the AFL competition looks different each week. With fewer matches, there is a greater focus on the teams hitting the highs and the lows this week.

See how your team did in this week's edition of theEdge of the Crowd's Power Rankings.

Having lost for the first time in 18 matches last week, the Demons started strong, kicking the first five goals of the night.

Missing Steven May, it was a bad night for Harrison Petty to be in the wars with a knee complaint and a shoulder complaint. After a frantic first half, the second half was an arm wrestle, as the Demons struggled in front of goal, kicking 1.5 in the third term when trying to put the Swans away.

The Demons may be concerned that the Swans are something of a bogey team, having lost 10 of the last 12 matchups against the Swans, but they will face the Magpies on the Queen's Birthday next week before having to worry about that again.

On a bye this week, the Saints' ranking did not change.

The Dockers have made themselves a premiership contender, after backing up their win over the Demons with a win over the Lions. After an arm wrestle of a first half, the Dockers strung together five goals in the third quarter and found another gear in the fourth when they were challenged by the Lions.

Andrew Brayshaw had 39 disposals and nine clearances, while Caleb Serong had 31 and six as his wingman. Further afield, Bailey Banfield kicked four goals, while Rory Lobb and Michael Frederick had three.

The Dockers will be proud of how they held on against a fast-finishing Lions side to secure the win and go into the second half of the season in second spot on the ladder.

The Cats exploded out of the blocks with the first six goals of the match, including Jeremy Cameron's 500th goal. They were brought back to earth in the second quarter, as star defender Tom Stewart was concussed.

The Cats were forced to adopt a makeshift defence including Gary Rohan, after Stewart was lost, having lost Jake Kolodjashnij to health and safety protocols prior to the bounce.

In the final quarter, they were challenged by a rampaging Bulldogs before Jeremy Cameron added three final-quarter goals to give the Cats enough breathing room to run away with a narrow win.

The Lions were full of attack early, as the match started as an arm-wrestle. Lachie Neale was strong in the coal face, with 31 disposals and four clearances against his old side.

Zac Bailey continued his strong run of form, with four goals, including a smart snap on his right foot early in the fourth quarter to keep the Lions in touch with the Dockers.

Charlie Cameron kicked three in a respectable outing, while Eric Hipwood managed one as he continues his return from an ACL injury that caused him to miss most of the first half of the season.

Having escaped a matchup with the Tigers with a dramatic comeback win, and missing Buddy Franklin, the Swans were in trouble in a familiar situation early in the second quarter against the Demons, almost six goals down.

Callum Mills led from the front, as the Swans ratcheted up the pressure against the Demons, as Mills had nine tackles and 27 disposals.

Without Steven May, the Demons struggled to contain Sam Reid and Logan McDonald, who each had three goals, while Joel Amartey was more impactful than his stat line suggested.

With the win, the Swans stamp themselves as premiership contenders once again, going into the bye.

On a bye this week, the Blues' ranking did not change.

The Western Bulldogs were caught well behind before they even knew what hit them, after a first-quarter blitz by the Cats. The shellshocked Bulldogs then settled and fought their way back into the match.

The third quarter belonged to the Bulldogs, as they methodically put together a five-goal streak of their own to get them back in the match.

In the end, the task was too much, as the Bulldogs succumbed to the Cats by 13 points. Concerningly, they are likely to be without Bailey Smith for two rounds, after he was reported for headbutting Zach Tuohy.

The Suns were slow starters, but they found their rhythm in the second term, as they kicked seven goals in the quarter to run away from the Kangaroos.

From there, it was all one-way traffic, as Touk Miller led the way in his 150th game, with 32 disposals, 13 clearances and eight tackles.

Matt Rowell and Connor Budarick were also at their best, as the Suns had a club-record 81 inside 50s for the match.

The only shadow was a serious-looking knee injury to Lachie Weller, who immediately writhed in pain on the ground after a non-contact knee injury.

On a bye this week, the Tigers' ranking fell as a result of the Suns' rise.

On a bye this week, the Giants' ranking did not change.

On a bye this week, the Power's ranking did not change.

The Magpies may be back in the eight, but their narrow win over Hawthorn was far from convincing. In a second-straight one-goal thriller, the Pies stood tall to take home the points.

Nick Daicos was dominant, with 36 disposals and 11 score involvements, while Jack Ginnivan and Ollie Henry each kicked two goals in a youthful Collingwood forward line.

A late shoulder injury to Reef McInness will be a concern, especially as Jamie Elliott was a late scratching, and the Magpies will be looking for some reinforcements in the back half of the season.

The Crows did enough to beat the West Coast Eagles, but it was hardly the percentage booster that they would have been hoping for. After five consecutive losses, the win is still good for the Crows, as they held off the Eagles, and slippery conditions to win.

After jumping out of the blocks, the Crows would be disappointed not to have rammed home their advantage and won by more, but struggled in front of goals again, although they did finish better than 50:50 this week.

The Hawks were improved from last week's performance in Darwin, but it wasn't enough to get the win in Liam Shiels' and Luke Breust's 250th games.

Hawthorn started slowly, struggling in the wet weather. After halftime, they came out with a new attitude, as Jacob Koschitzke, then Breust, then Mitch Lewis, then Sam Butler all kicked goals in quick succession in the third quarter.

Jai Newcombe continued his strong form, as he had 24 disposals, 11 tackles and seven clearances, appearing comfortable in the wet weather.

On a bye this week, the Bombers' ranking did not change.

Like West Coast, it would be understandable for the Kangaroos to have been looking forward to the bye. The Kangaroos started with a varied forward line, with Nick Larkey up the ground, and it paid dividends, with four first-quarter goals for the Kangaroos.

From there, they added just three more in the final three quarters, although one of those was from Jason Horne-Francis, who showed off the pedigree that earned him the top billing in last year's draft.

The Kangaroos were held scoreless in the second term, and goalless in the fourth, in what was a very dry afternoon for one goal umpire, as the Kangaroos continued their tough season.

West Coast could have been forgiven for hoping for the bye, given the way their season has panned out so far. Despite that, the Eagles fought hard in the second half against the Crows.

Early in the fourth quarter, they were just 21 points down, as close to an opponent as they have been in weeks, after seven consecutive 50 plus point drubbing. It wasn't enough to give them a win, despite Andrew Gaff's 30 disposals.

Jack Darling continued to impress as his form improved with game time, as he kicked two goals and set up another, building into the second half of the season with some momentum.