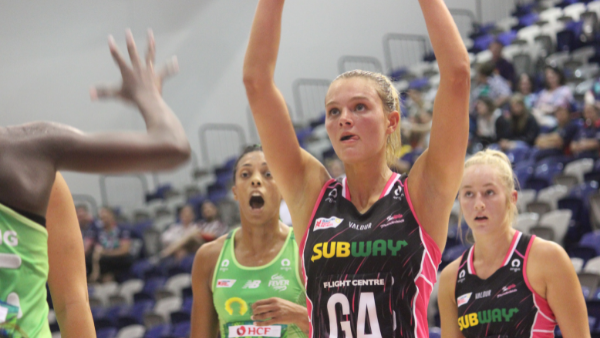 Thunderbirds have brought the heat into their campaign so far with new recruits really making a difference. Can they continue that spark or will it fizzle out?

Thunderbirds have brought the heat into their campaign so far with new recruits really making a difference. Can they continue that spark or will it fizzle out?

The Thunderbirds have brought the heat into their campaign so far with new recruits really making a difference. Can they continue that spark into 2022 or will it fizzle out?

Former Queensland Firebirds goaler Tippah Dwan swapped the purple dress for a pink one in 2022 and has already made a massive impact on the Thunderbirds goal circle.

The Thunderbirds also elevated training partner Tayla Willams for her first Super Netball Contract which will add depth and versatility into the midcourt.

The thing the Adelaide Thunderbirds will need to work on if they are to make it to the finals for the first time since 2013 is consistency across the court.  While Shamera Sterling has been proven to win the ball back for her side, it didn’t always result in a goal down the other end.

So while the defence wins plenty of ball back it’s not too long before the ball is coming straight back down to the defensive end, with the Thunderbirds averaging 30.4 turnovers in a game last season.

It was another disappointing season for the Adelaide Thunderbirds, finishing once again towards the bottom end of the ladder in seventh.

The Thunderbirds were slow out of the blocks starting the season with five straight losses and looked a bit disjointed with the side not coming all together until March due to quarantine requirements from international stars.

Although the second half of the season, there was a massive improvement with the Thunderbirds having a pretty even backend to the season having three wins and three losses, among those wins, was a stunning one-point victory over the Sunshine Coast Lightning, with the side being able to rectify past mistakes to flip the result from earlier in the year.

The Thunderbirds' biggest strength is its defensive end, being led by one of the world's best goalkeepers in Shamera Sterling who won back plenty of the ball for the Thunderbirds, leading the league on intercepts with 49.

Sterling also creates a dangerous combination with whoever she’s partnered with within the goal circle with both Latanya Wilson and Matilda Garrett working well with Sterling.

The Thunderbirds' biggest weakness is its unsettled lineup, for most weeks the starting seven lineup for Adelaide was different to the week before.

The Adelaide Thunderbirds really took advantage of the rolling subs and were able to constantly put different combinations out on court but especially during the first half of the season, things looked a little disjointed with the constant changes.

In 2022, coach Tania Obst may need to let things play out a bit more instead of constantly changing the lineup out on court which will allow for more consistency across the season and more wins to go their way.

The latest recruit to the Adelaide Thunderbirds in Tippah Dwan has made a huge improvement to the side in her short time in the pink dress.

After taking the league by storm in her first season at the Firebirds she wasn’t able to get the same amount of court time, so she made the move to South Australia to take her game to the next level.

Tippah Dwan in action for the Thunderbirds. (Photo: Elly McNerney)

During the pre-season, she’s created a dangerous partnership with Lenize Potgieter, with Dwan’s experience of playing alongside a holding shooter from her time playing with Romelda George. As well as a combination with fellow long-range shooter Georgie Horjus certain to be a winner, especially in the supershot period.

From what we saw in the pre-season and at the Team Girls Cup, it’s going to be a new chapter in the Thunderbirds history books with the side looking primed and ready to make finals for the first time since the championship win in 2013.

The addition of Dwan has made the goal circle a lot more cohesive and with a relatively settled lineup going into round one, the Thunderbirds are primed and ready for a great season.