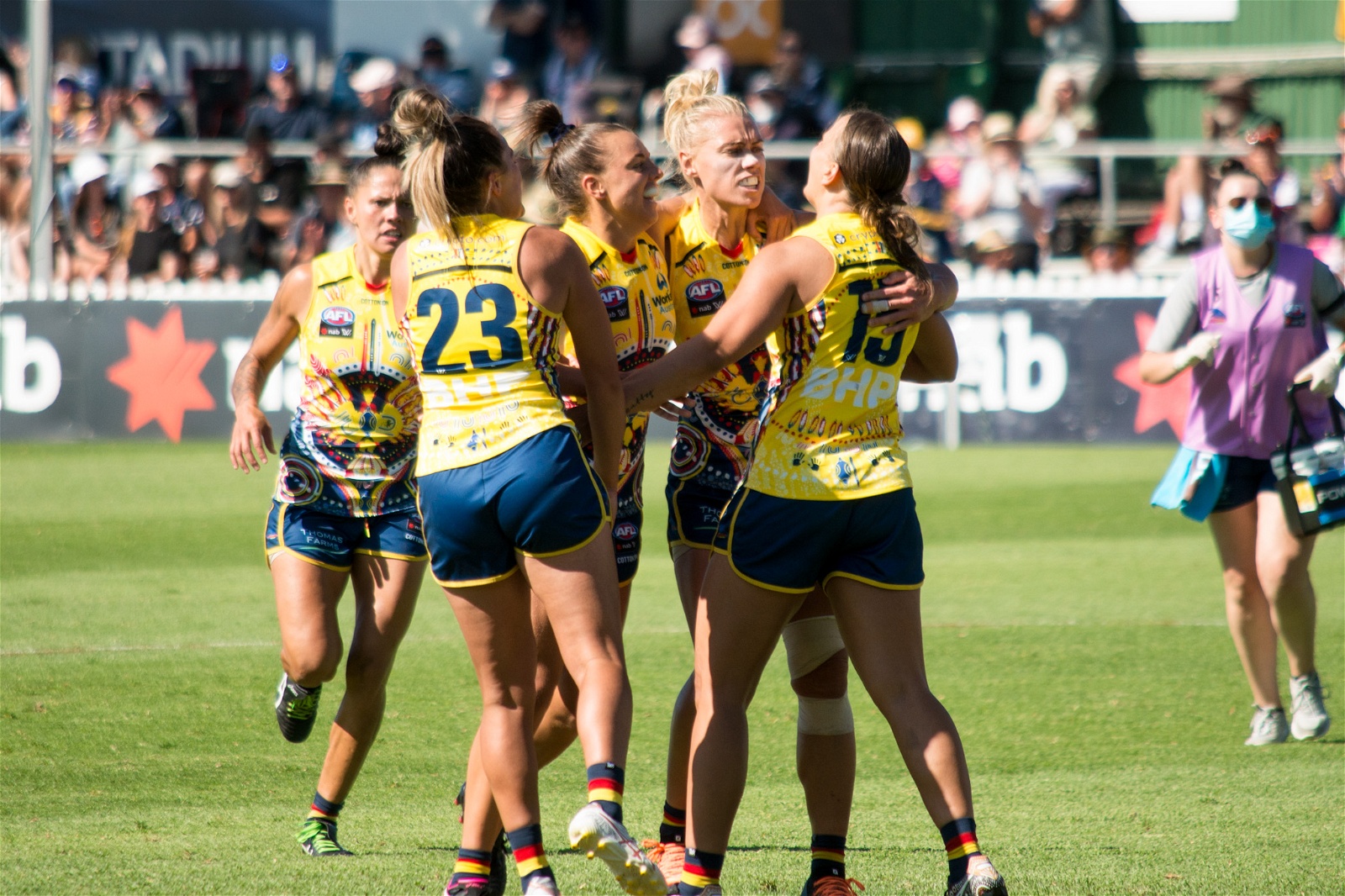 The Adelaide Crows celebrated Ebony Marinoff's 50th game in style with a thrilling two point win over the Collingwood Magpies at Norwood Oval on Sunday afternoon.

The Adelaide Crows celebrated Ebony Marinoff's 50th game in style with a thrilling two point win over the Collingwood Magpies at Norwood Oval on Sunday afternoon.

The Adelaide Crows celebrated the 50th game milestone for Ebony Marinoff with a thrilling two point win over the Collingwood Magpies at Norwood Oval on Sunday afternoon.

It wasn't easy, but the Crows toughed it out and held off the Magpies who were peppering for a win in the final term. The defensive unit once again showed its strength, holding out the Magpies with a little bit of luck going its way.

While it wasn't her most prolific performance of the year, Marinoff was once again a solid contributor in her milestone game.

Edge of the Crowdspoke to Courtney Cramey after the match about thespecial player who wears the number 10.

One of the inaugural Crows, Cramey was once a teammate of Marinoff and is now one of her coaches, and she says "it's a privilege to be able to watch grow across the course of her journey.

"She's just come on in leaps and bounds, but it just goes back to her want and desire to get better and she goes into every session wanting to improve, so it's just been really great to watch her across the course.

"You know her work rate and her work ethic across the course of her football journey's been huge and her ability and want to get better, week in week out, is what's made her the player that she is today.

"It's a really special milestone for her, so it was nice to see her family out here - they actually travel to every game - and that's just kind of the person and the upbringing that she's had."

Cramey has also had special insight into the growth of the midfielder and her improvement over the years, and lately, that focus has been on the offensive side of her game.

"She's always been a really good tackler, a really good defensive type player and her contest has always been really sound, but what she's doing now when she has the football in hand, is really contributing to our team and how it gets.

"She's becoming a really rounded footballer and a really strong part of our team."

Erin Phillips was back for the Adelaide Crows back at home after she missed Round Eight with a knee injury. Brooke Tonon also returned for her second game after debuting in Round Seven. The pair replaces Eloise Jones and Hannah Munyard, who were out with injuries.

Collingwood was without Britt Bonnici (knee - season) and Aliesha Newman (concussion), but brought in Erica Fowler and Ebony O'Dea for the clash.

It didn't take long at all for Phillips to be back in the middle of the action, the ball winner missed her first shot on goal, but hit the scoreboard with a set shot major to put the Crows up early.

Her goal was followed by one to Ash Woodland, giving Adelaide a strong advantage at the first break.

Collingwood had its first inside 50 early in the second term and the improvements continued from there. Tarni Brown opened her side's goal scoring with a neat goal, before Eliza James brought the margin right in heading towards half-time.

Fowler was carried from the field on stretcher in the second term, with a neck brace on, following a clash with Najwa Allen's leg. The incident will certainly be looked at by the Match Review Officer.

At half-time, the Magpies advised that the forward had been taken to hospital with the main concern being a possible neck injury, less so the concussion.

It was just a one point ball game at the main break.

James hit the scoreboard again for Collingwood to open the second half, jumping Adelaide and putting the home side under the pump.

It took some time, but the Crows managed to make the most of repeat entries, Woodland taking a nice grab and working the angle for her second of the day.

Chloe Molloy of the Collingwood Magpies shrugs a tackle against the Adelaide Crows in Round Nine. Photo: Dani Brown

Playing down back to defend a late chance at goal, Chloe Molloy took a mark in the square to deny Marinoff a milestone goal.

To open the scoring in the fourth, Marinoff put one out in front of Danielle Ponter, who increased Adelaide's lead with a nice set shot.

In her 50th game, Marinoff also became the first AFLW player to 200 career clearances thanks to her seven today.

A free kick to Steph Chiocci, picked out in the Magpies' forward line, was rushed over the line for a behind. The Crows' backline was feeling the pressure, peppered by the Magpies and unable to fully clear it - even off the booming boot of Phillips.

The Magpies eventually got a clear look at goal, Molloy was able to throw it on her boot and snap the goal across her body. It reduced the margin to just two points with two minutes remaining in the contest.

Adelaide was the first team to go forward from the next centre clearance, but Collingwood intercepted and immediately sent it forward through Molloy again.

Stuck in the Magpies' forward 50, the Crows were able to clear through Allan, but Sabrina Frederick was there and given a free kick.

A kick from Chiocci spiralled and ended up out on the full, giving the Crows all important possession deep in their defensive 50.

They held on in an absolute thriller for their milestone player Marinoff, and you could see the relief on the Adelaide Crows' faces as the final siren went - they'd survived one almighty test in the Magpies.

Post-match, Cramey said the reset at half-time was crucial to turning the contest back in their favour after the Magpies had really challenged them in the second term.

"I think we just went back to some key basics around our fundamentals and winning the contest.

"So, there was just a bit of a reset for us and Collingwood did bring the heat early, so we needed to challenge them and meet that pressure gauge, and to the girls credit, they came out and did that."

It's the pointy end of the season now and Adelaide still has a little to improve in the final match against St Kilda next week, before they start thinking about finals.

"I think it comes back down to consistency and making sure that we can deliver on that for all four quarters of the game.

"We know that our pressure's good enough and we know around the contest that's what we pride ourselves on so if we can keep bringing that consistently, we'll go well into finals."