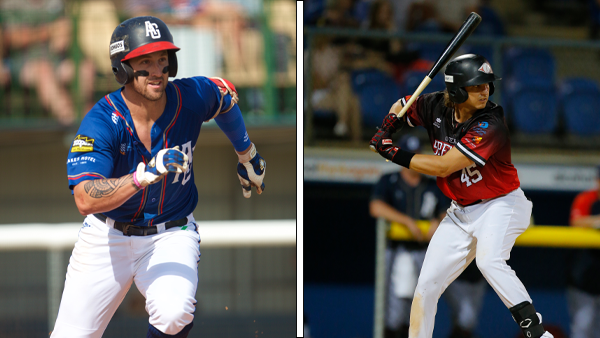 In the first major signing news ahead of the 2022/23 ABL season, the Melbourne Aces has secured the signatures of Aaron Whitefield and Robbie Glendinning.

In the first major signing news ahead of the 2022/23 ABL season, the Melbourne Aces has secured the signatures of Aaron Whitefield and Robbie Glendinning.

In the first major signing news of the Australian Baseball League off-season, the Melbourne Aces has secured the signatures of two of Australian baseball's highest-rated players.

Looking to continue its dominance of late in the league after winning the last two Claxton Shield titles, Melbourne Aces General Manager Justin Huber said that adding two players of this calibre will be great for the team.

“Adding Glendinning and Whitefield to the Aces roster is a huge step towards defending the Claxton Shield title and completing the three-peat”, Huber toldthe club's website.

Whitefield, a two-time Helms Award winner as the league's best player in 2017 (with the Bandits) and 2020 (with the Giants), he also become Australia's 35th Major League Baseball debutant when he entered a July 25 2020 game for the Minnesota Twins in a pinch-runner situation against the Chicago White Sox.

Whitefield first signed a contract with the Minnesota Twins organisation in 2015 where he started at a rookie-level in the then-called Gulf Coast League, working his way up to Double-A.

After a full 2021 season playing for the Minnesota Twins' Double-A affiliate, the Wichita Wind Surge, however, in November, Whitefield signed with a new MLB organisation; the Los Angeles Angels.

Over the course of his ABL career, Whitefield has played 169 games, tallying 93 hits, along with 129 runs, 64 stolen bases, boasting a career .313 batting average.

Already a three-time Claxton Shield winner with the Brisbane Bandits, Whitefield is looking forward to contributing to another Claxton Shield-winning season, this time with the Melbourne Aces.

"I am really excited to come back to the ABL after a few years of not playing at home. I’m even more excited to be with the Melbourne Aces and help keep the championship and Claxton Shield in Melbourne", he told the club's website.

After signing with the Kansas City Royals organisation earlier this year, Glendinning was originally picked up by the Pittsburgh Pirates organisation via the 2017 MLB Draft after attending the College of Missouri. The 26-year-old is on the comeback from Tommy John's surgery, as he prepares for his first Minor League season since 2019.

Glendinning referenced Melbourne Aces coach Peter Moylan and the form the organisation has been in throughout the past couple of seasons as reasons why he's excited to make the move across the country.

"I can’t wait for the new ABL season to start after not being able to play any games in Australia following my injury. Melbourne have had a great run these last couple of years, and I am looking forward to helping keep that run going.”