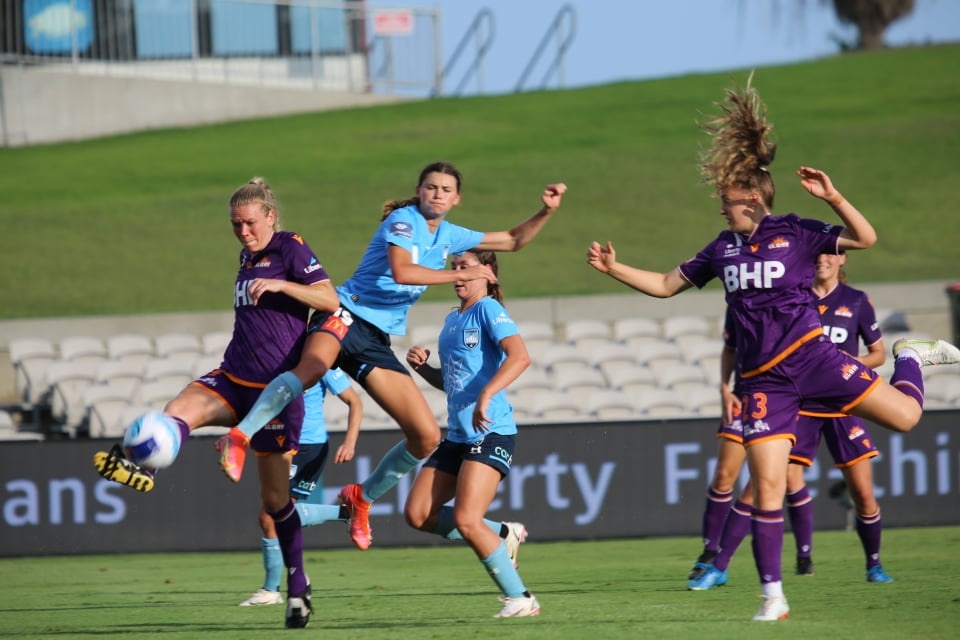 Round Six for the A-League Women only had four games but Sydney continued to soar, Canberra and Wellington failed to get off the ground.

Round Six for the A-League Women only had four games but Sydney continued to soar, Canberra and Wellington failed to get off the ground.

Round Six of the Liberty A-League Women saw four matches take place after the COVID-related postponement of the Newcastle Jets' game with Melbourne Victory.

Adelaide United is now a serious contender for finals football after they gained an impressive victory at Viking Park.

Adrian Stenta’s side picked up its second win on the bounce and have scored seven goals in the process.

Conversely, Canberra United, who had high hopes of a second successive Finals campaign is still looking for its first win.

Adelaide took the lead after nine minutes when Dylan Holmes grabbed her first goal since returning from BK Häcken in Sweden'sDamallsvenskan.

Emily Condon lofted a pass over the Green’s defence for Paige Hayward to head into Holmes’ path. The midfielder, who played Champions League football for her Swedish side before Christmas, volleyed home a superb opener.

In-form Chelsie Dawber doubled the visitor’s lead fiveminutes before the interval. Fiona Worts played a long ball through for her partner to clip a shot into the bottom corner.

After the interval, Canberra mounted a comeback when Allira Toby’s high cross was headed home by Ash Sykes.

Despite being putting Adelaide under pressure, the capital city side couldn’t make it pay and, instead, they fell to a sucker punch from their visitors when Worts fired home for 3-1.

With the likes of Sydney FC, Melbourne City, and Melbourne Victory all losing key players to the Matildas over the coming weeks, the South Australians have an outstanding opportunity to put more points on the board to earn a first-ever Finals qualification.

Leaders Sydney put in a dominant performance to earn a deserved victory over a Perth Glory side who were paying the price for playing three games in a week.

Sydney was 3-0 up with just 25 minutes of play after a series of defensive difficulties for the Western Australians.

The hosts went ahead when Cortnee Vine got away from the close attentions of Liz Anton and fired an effort across the box which Perth keeper Courtney Newbon got a hand on, but the ball fell into the path of Mackenzie Hawkesby who ghosted in ahead of Tash Rigby to lash home inside the six-yard box.

It was 2-0 when a long cross-field ball from Remy Siemsen to Vine saw the latter race away from Sarah Carroll to get one on one with Newbon to smash a shot into the far corner of the net.

It didn’t take long for Sydney to assert their total dominance with a third. Once more, Vine was at the heart of the action.

Charlize Rule and Rachel Lowe were involved in the build-up before Vine was found down the right wing. She kept the ball in play brilliantly, got away from Sarah Carroll, and laid off a low ball to Siemsen at the near post who tucked a first-time effort into the net ahead of Anton.

Glory needed to come out on the front foot at the start of the second half to have any hope of an unlikely comeback, yet within four minutes of the re-start, they were 4-0 down.

Hawkesby’s corner came in from the right and it was met by the head of Rule who was able to make a late run unmarked to send a thumping header into the far corner of the net.

Whilst Susan Phonsongkham and Liz Anton put in impressive shifts for the visitors, it was nowhere near enough.

A spell of two goals in five minutes before half-time break ultimately proved to be the difference as Melbourne City saw off Wellington Phoenix at AAMI Park.

Phoenix, without a win so far in their maiden A-League Women campaign, started energetically. They were able to build offensively with Mackenzie Barry and Chloe Knott working hard to try and create opportunities with Alyssa Whinham buzzing around impressively once more and Kate Taylor putting in some fierce challenges.

However, an ability to convert chances, something that has seen the Kiwis score just once all season, returned to haunt them as City took the lead just before the half-hour mark. Holly McNamara put a ball in towards Hannah Wilkinson. Taylor's attempted headed clearance fell straight to Kaitlyn Torpey who fired a first-time shot into the net.

Two minutes before the break, Melissa Barbieri's long goal kick was headed back by Barry, but the teenage Phoenix defender failed to get anywhere enough power on the ball which allowed Wilkinson to run through and lift the ball over Lily Alfeld into the net for her eighth goal in three games.

Three minutes into stoppage time, City went three-up. McNamara earned a corner after Isabel Gomez looked to have cleared any danger. Chelsea Blissett's high set-piece caused chaos in the Wellington six-yard box as Winonah Heatley got in at the far post ahead of Zoe McMeeken and Ava Pritchard to force the ball home.

The scoring was completed with 12 minutes to go. The Phoenix were unable to clear Tyla-Jay Vlajnic's corner from the right and City defender Emma Checker was able to twist and fire home a powerful finish at the back post.

Catherine Cannuli’s side earned their first win of the season as the Queenslanders' disappointing start to the campaign continued.

The Roar went into this game after finally winning their first game of 2021/22 in some style with late goals at Melbourne Victory last time out, but any hopes that this was the start of a climb up the table were dispelled by the Wanderers.

The Red and Blacks went into the game with three draws and a defeat from their opening four matches but earned the victory when Olivia Price was brought down in the box. Australian international Bryleeh Henry stepped up and smashed home the penalty.

With Western Sydney now just three points outside the Finals places and teams above them losing players to international duty, these are exciting times for the Wanderers.

Conversely, Brisbane, with four defeats from six matches, are far too close to the bottom of the table for comfort.