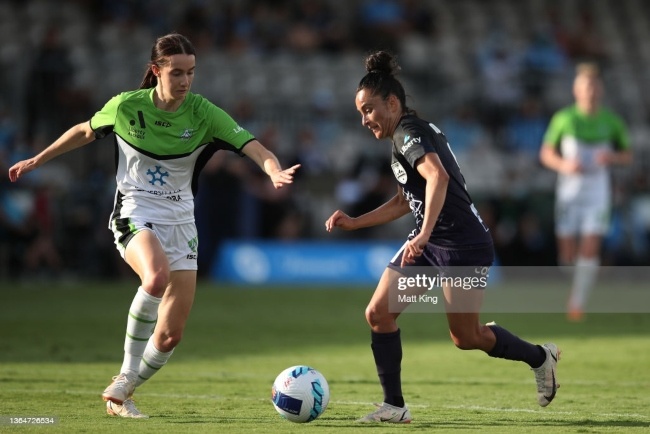 Round Seven makes the half-way mark of the regularLiberty A-League Women seasonand it was the first time in over a month that all of the teams were in action. Leaders Sydney FC remains a class apart after a stunning victory, but the race for the other Finals spots is really hotting up.

City ran out winners in a tight game played at Coopers Stadium in front of over 2,000 fans.

Both teams went into the match in good form and it was the home side who had the best of the first half with Emily Condon, Chelsie Dawber, and Fiona Worts prominent.

Melbourne City edged their way back into the contest and scored the winner with 66 minutes on the clock. Rebekah Stott found Rhianna Pollicina who got away from Paige Hayward to slot home.

Honours were even at No 2 Sportsground in a hugely entertaining clash between the Jets and a Glory side hit by COVID and injuries.

The visitors, against all odds, produced a heroic performance and will feel they should have taken all three points.

Youngsters Deborah-Ann de la Harpe and Hana Lowry were the picks of the Perth crop. Sophie Harding was impressive for the hosts and created two opportunities that needed visiting keeper Morgan Aquino to be at her best.

Perth took the lead with 54 minutes gone as Danish international Mie Leth Jans played a well-judged ball over the top into the path of Lowry. The 18-year-old controlled the ball instantly, turned, and fired a shot into the far corner.

Two golden opportunities were missed in quick succession to seal the win. Consequently, Perth paid the price as Jets dominated the final 20 minutes.

The home side levelled through Liz Eddy who was found in the box by Lauren Allen. Newcastle had several chances to clinch the win, but ultimately the points were shared.

The Liberty A-League Women leaders went into this game without the hugely influential Cortnee Vine and Remy Siemsen, arguably their two best players. Both in Dubai with the Matildas pre-Asia Cup training camp.

Yet the Sky Blues have real strength-in-depth with Chilean superstar Cote Rojas unleashing her magic wand. Her quality was a contributing factor in Ante Juric’s side putting a winless Canberra to the sword.

Rojas hit a superb hat-trick. Her first came from the spot after the South American was brought down by Hayley Taylor-Young on 29 minutes. The former Adelaide United striker was on target again when running on to Lauren Keir’s back pass and lofting a shot over Keeley Richards.

Ally Green’s cross-shot made it 3-0 just after the hour mark with Rojas clinching the match ball when she volleyed home from a corner.

Princess Ibini extended Sydney’s lead when she ran onto Taylor Ray’s pass to slot home despite being pushed by Chloe Middleton. Ibini fed Rachel Lowe to complete the scoring with two minutes to go.

Brisbane Roar came from 2-0 down to take all three points thanks to a penalty three minutes from Katrina Gorry.

Going into this game, Phoenix had only scored one goal all season. Yet, within 25 minutes they tripled their tally for the season. Alyssa Whinham, one of their young stars of the campaign curled a glorious effort home. It got better still when Grace Jale headed home from Chloe Knott’s corner.

In the same period, there was further joy for Wellington when goalkeeper Lily Alfeld made a superb penalty save from Larissa Crummer after Mariel Hechter earned a spot kick.

The Kiwis needed to keep the Queenslanders out until the break at least, but Brazilian Hecher pulled one back 11 minutes before time. Crushingly, less than a minute into the second half, Roar was level thanks to Crummer who stepped onto Cannon Clough’s cross from Gorry’s through ball.

The Phoenix were denied even a point with that last gasp penalty when Ava Pritchard brought down Jessie Rasschaert.

Victory was largely dominant in a tough battle in hot conditions in Parramatta. However, a combination of disappointing finishing and a typically well-organized Wanderers backline meant that they only had a single goal to show for their efforts.

It took 73 minutes for the goal that the game was desperately crying out to arrive.

Debutant Francesca Iermano's cross into the box from the right-hand side clearly came off the arm of Western Sydney's Rosie Galea. Referee Rachael Mitchenson awarded a corner, which drew a wry smile from the Wanderers player to reveal her guilt.

Whilst Mitchenson missed an obvious offence, her assistant Amber Morris did not and eventually advised her colleague that a penalty was required. 20-year-old forward Maja Markovski stepped up and dispatched her effort cooly into the top left-hand corner to seal Victory's win.