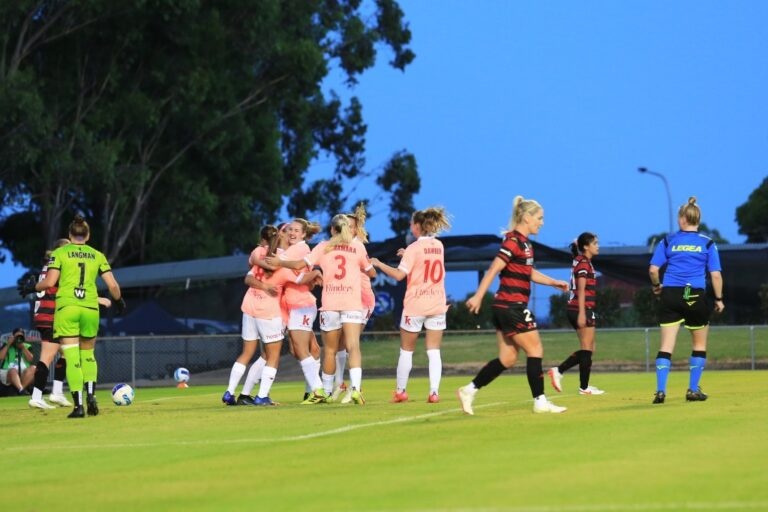 Four matches produced 17 goals and some superb entertainment as the Liberty A-League Women prepares to enter the final quarter of regular-season matches.

Brisbane Roar managed to let three points slip between their fingers in the last 11 minutes of a match yet again. It was Melbourne City, down to the bare bones due to COVID and injuries, who took the win at Moreton Daily Stadium.

The Queenslanders hit the front with just under 20 minutes left to go when Meaghan McElligott was brought down in the box. Referee Rebecca Mackie pointed to the spot and Katrina Gorry smashed the penalty home.

Within eight minutes, City was level with a sensational free-kick from Rhianna Pollicina. The former Newcastle Jets star curled a glorious shot into the net.

Then, four minutes into stoppage time at the end of the 90 minutes, Pollicina stepped up to take another free-kick. It curled into the box and A-League Women top scorer Hannah Wilkinson nodded home a last gasp winner.

Newcastle Jets and Canberra United shared six goals in a thriller at McDonald Jones Stadium, but the outcome does neither side any favours.

This was a game that exploded into life from the start. Jets’ Taren King started a move that ended with Marie Dølvik in possession out on the left-wing. She cut in and beat Canberra youngster Mikayla Vidmar. The Norwegian progressed to crash home a sensational effort into the far corner of the net. Just 50 seconds were on the clock.

Canberra levelled on 18 minutes. Allira Toby found Hayley Taylor-Young on the right. The local product beat Kirsty Fenton and hit a low pass into the box which Hannah Brewer got a touch on. The ball fell kindly to Ash Sykes to hit first time into the net.

It remained that was eight minutes into the second half. Dølvik’s long ball through found Sophie Harding in space to run into and fire home into the left-hand corner.

There then followed an incredible spell of three goals in four minutes.

First, Haran’s free-kick came into the box and rebounded into Sykes’ path via Heyman. This allowed the 30-year-old to roll a shot into the left-hand corner for her’s and Canberra’s second.

Then, Canberra went ahead as Robinne curled into the near post from the right, and Toby was allowed to rise highest to direct a header into the net. It was her first goal in almost two years of W/A-League Women’s football.

The drama reached fever pitch when Sunny Franco, with only four previous goals in the competition from 51 matches, was played in along the left with a superb outside of the foot pass. Franco took a touch and hit a great finish across Richards to level the scores.

Perth Glory came from 2-1 down with nine minutes to go to defeat winless Wellington Phoenix and move into the top four.

The Western Australians hit the front when Abbey Green gained possession after Grace Wisnewski found the Perth player rather than her Wellington teammate Zoe McMeeken. Green advanced along the left to play a ball in for Sofia Sakalis who got a shot away which deflected into the net off of Phoenix defender Kate Taylor.

The Nix replied within six minutes. McMeeken played a ball inside from the right which eventually found its way to Alyssa Whinham. The 18-year-old played a glorious angled pass between two Glory defenders for Grace Jale to finish.

It was the first time Wellington have scored a goal after going behind this season.

It got even better for Wellington six minutes from the break as they took advantage of a comedy of errors from Morgan Aquino.

The Perth goalkeeper threw the ball ahead of herself just outside the box to launch a clearance. However, the throw was slightly too far ahead which allowed Chloe Knott in to challenge.

The consequence was rushed clearance deflected off of Knott and ran to the left of goal where the Phoenix forward slid a shot towards the far post which, as Aquino slipped, over rolled over the line.

In a second half that had far fewer goalscoring opportunities, Perth overcame the loss of English attacker Gemma Craine to a suspected broken wrist to grab an equalizer. Sarah Cain gained possession 25 yards out on the right and squared a ball for Liz Anton.

Glory’s Kiwi put a high ball into the box first-time which bounced before being turned back in from the left by Mie-Leth Jans to an unmarked Hintzen to nod home her second goal in three goals this season.

The Western Australian side has superb spirit in adversity and their efforts were rewarded with two minutes to go. Deborah-Ann de la Harpe’s free-kick on the far left curled into the back post where it was touched back into the mix by Hintzen for Jans to fire home.

It was heartbreak for Wellington, but conversely, Perth has now won three games this season in the final ten minutes. This emphasizes the character of the team. After going winless for 2020/21, Alex Epakis’ team has real Finals hopes.

Adelaide United’s Finals hopes look better than ever after they dispatched a Western Sydney Wanderers side who continued their travails in front of goal.

Scoring just two goals all season is a worrying statistic. Potentially worse is the shoulder injury suffered by defender Clare Hunt. She has been in outstanding form in recent weeks.

The action was delayed by 20 minutes due to a hole appearing in the Marconi Stadium pitch. Once underway, Adelaide took an early lead.

Western Sydney created opportunities, but it was Adelaide who punished the hosts. Worts played in Dawber who shot home calmly past Willacy.

Dawber completed the scoring two minutes from the end after being found by substitute Reona Omiya.