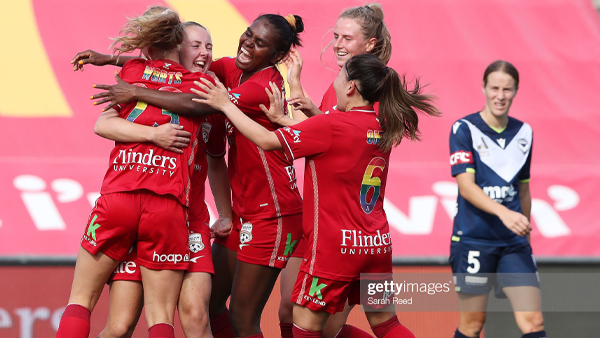 Round 13 of the A-League Women saw a host of vital matches as the competition edges towards its final week of regular-season matches. Ben Gilby rounds up all the action.

Round 13 of the A-League Women saw a host of vital matches as the competition edges towards its final week of regular-season matches. Ben Gilby rounds up all the action.

With only one week of the regular season left, there were some hugely significantgames in the Liberty A-League this weekend.

Adelaide United qualified for its first-ever A-League Women Finals campaign with yet another dominant display in the competition’s first Pride match.

Whilst the Melbourne Victory were playing its fifth game in 14 days, you cannot take away from Adelaide’s sensational run of form at exactly the right time to partially erase the pain of last season’s narrow miss.

The win came thanks to a Fiona Worts hat-trick. Her first goal came at the 18-minute mark when Chelsie Dawber’s ball-in was dispatched into the net at the second attempt.

Her second goal came seven minutes later after build-up play between Shay Evans and Reona Omiya, which led to Emily Hodgson playing the ball into the area where Worts was. Victory keeper Casey Dumont repelled her initial shot, but the English striker followed up to score.

The hat-trick was completed just after the break when Dawber played another ball across for Worts to make it 3-0.

Canberra United continued its greatly improved recent form by sweeping aside the Newcastle Jets at a wet Viking Park.

Eleven minutes had elapsed on the clock when Lauren Keir played the ball into the mix for Michelle Heyman. The former Matilda got away from the close attentions of Cassidy Davis and laid off her attack, all for Allira Toby to fire home from close range.

Canberra doubled their lead just before the half-hour. Keir played a corner from the left high into the box. Ally Haran got up highest to nod across the box towards Heyman who flicked a header into the net at the left-hand post.

The scoring was completed just before the break when Heyman robbed Tiana Jaber of the ball, rode off an attempted challenge from Kirsty Fenton, and slotted the ball calmly past Claire Coehlo for her sixth goal of the season.

EPAKIS COMMITS FOR THE FUTURE BUT IS FOCUSED ON THE NOW

The Brisbane Roar recorded a sensational win against a Melbourne City side who would have gone top of the ladder with a win, however, the away side prevailed in a tight contest.

The only goal came after 26 minutes when a long throw found Shea Connors who chested the ball, turned, and fired home.

The result was only Brisbane’s third win of the campaign.

Perth Glory’s Finals hopes are now out of its own hands as Sydney FC gained a deserved win to put the club within touching distance of the Premiers Plate.

After solid pressure, Sydney finally took the lead with 34 minutes played when Mackenzie Hawkesby’s corner was aimed to Nat Tobin in the middle of the box. The defender, who was originally going to play for the Glory this season, flicked a volley over Courtney Newbon in the Perth goal and into the net.

It remained that way until the break. After the Glory missed the opening opportunity of the second period, the Sky Blues doubled their advantage.

Hawkesby was the provider once again as she lifted the ball through to Cortnee Vine, who was allowed far too much space. Despite Kim Carroll’s attempts to backtrack, there was only going to be one outcome as Vine took a touch forward and comfortably lifted the ball home.

Vine made the game's result safe for her team seven minutes later. Princess Ibini beat Deborah-Anne de la Harpe along the left and played a cleverly positioned low ball in from the right which bisected Perth’s defence for Vine to slide home the third.

Perth tried to hit back and did so with four minutes remaining as Tash Rigby played a square ball to Lisa De Vanna who had taken up a central position just over 30 yards out. The Western Australian played a beautiful pass through the Sydney defence for Aideen Keane to run onto and lift the ball over the diving Whyman. It was the 20-year-old’s first A-League Women goal.

The match between Western Sydney Wanderers and Wellington Phoenix was postponed due to weather conditions in Parramatta.