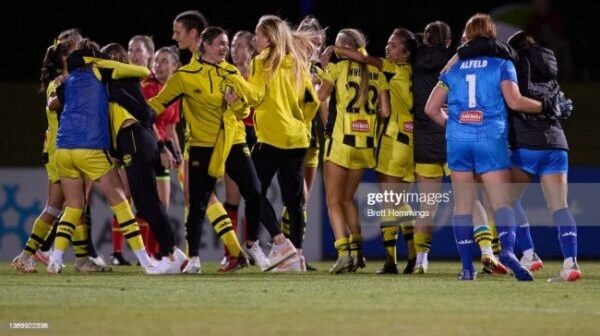 Round 11 brought five matches, 23 goals, and two historic results. What a weekend it was in the Liberty A-League Women.

Roar’s frustrating season continued as they slipped to their heaviest ever defeat as Adelaide striker Fiona Worts hit five goals.

The South Australian side took only 13 minutes to take the lead. Emily Hodgson was fouled by Mariel Hecher in the centre circle. Brisbane looked to have dealt with the danger when Natalie Tathem played the ball comfortably back to her goalkeeper Mia Bailey.

Unfortunately, the 17-year-old custodian's first touch was too heavy and then was forced into a rushed clearance by Worts which led to a weak effort straight into the path of Chelsie Dawber. The locally produced striker in her current form did not need a second invitation to slot home.

Adelaide responded well with 23 minutes gone and forced back-to-back corners for the second time in quick succession. Emily Condon's ball from the left curled in viciously on the strong breeze. Kayla Sharples got up highest to launch a header, but it was Roar's Hollie Palmer who deflected the ball past her own goalkeeper for 2-0.

It took just a further 10 minutes for Worts to make the most of another unfortunate moment for Bailey in the Brisbane goal. Dylan Holmes, running centrally played in Dawber on the right. The striker's low shot across the box was initially claimed by Bailey, but she couldn't hold on as the ball went straight to Worts who couldn't miss from four yards.

Two minutes before the break it was 4-0. The move started at the back with Sharples initiating a move with a long ball towards the right which eventually found Isabel Hodgson. She beat Anna Margraf and played in Dawber who put in a superb low ball across for Worts who skilfully directed the ball into the far corner of the net.

Ten minutes into the second period, Condon pulled a corner to the near post which held up in the wind, and Matilda McNamara got up to direct a back header into the far corner of the net.

Within 120 seconds, Brisbane conceded again after a moment of sensational skill. Katrina Gorry had the ball taken off her in a robust challenge from Holmes who advanced towards the box and curled a delicious pass with the inside of her foot into the path of Worts who ran in at the back post to crash home.

A third goal in four minutes then followed, but fortunately for the home fans, this one went their way.

Gorry ran onto the ball in the centre, just outside the box beat McNamara and pulled the ball across the box for Shea Connors to sidefoot home from close range.

Back came Adelaide, and Emily Condon released Worts and she drove sensationally past Jessie Rasschaert and lifted the ball over the diving Bailey who, in the process injured herself and had to leave the field of play.

With 25 minutes to play, Adelaide hit their eighth as Gorry lost possession to Omiga. Possession was then provided to Worts. The striker played in Dawber who was wrapped up by the Roar, only for the ball to find its way for Worts to fire across Shuttleworth.

The final goal went Brisbane’s way. They won a free kick on the right-hand side. Gorry's fierce effort was too hot for Grove to handle and she could only parry the ball into Connors' path inside the six-yard box to score.

Chloe Knott gave the Nix the lead after 41 minutes when she fired in a shot that was too powerful for Canberra’s 17-year-old goalkeeper Chloe Lincoln to hold.

Five minutes into the second half, Wellington doubled their advantage as Grace Jale was played in to fire home.

The win was sealed with 62 minutes on the clock as Ava Pritchard’s shot was deflected into the net by Allyson Haran.

Victory is finding top form once more at the best time of the season.

It took them just five minutes to take the lead as Kyra Cooney-Cross, dominant throughout, found Catherine Zimmerman who, at the second attempt, was able to turn and score.

Cooney-Cross was the provider of Victory’s second as she played in Mindy Barbieri to slide it home.

Victory’s provider for the first two turned goalscorer herself with 58 minutes played. The 19-year-old Matilda skips round Sarah Langman in the Wanderers goal to slot into the net.

Within two minutes, it was 4-0 as Cooney-Cross’ effort finds Zimmerman. Her first try is blocked, her second comes back off the post, but it’s third time lucky with a fierce effort.

Matters are sealed when Courtney Nevin grabbed her first-ever A-League Women’s goal with a glorious long-range effort. A fine way to celebrate her 20thbirthday.

Sydney remained clear at the top of the table as their goalkeeper Jada Whyman extended her clean sheet record to a ninth game amidst the late drama.

Following a one-two with Remy Siemsen, Princess Ibini lashed a right-footer into the net.

Three minutes into stoppage time at the end of the 90, the Jets won a corner with goalkeeper Claire Coelho coming up for it. Taren King got a shot away for Newcastle which ended up in the net off of Coelho.

Jets joy turned to sorrow as referee Georgia Ghiradello ruled it out due to a foul on Whyman by Coelho as the ball came in.

A vital game in the battle for Finals qualification went City’s way on the Central Coast of New South Wales.

Perth adopted a high press in the first half which forced numerous early defensive errors out of the Sky Blues, but crucially the Purples were never able to take advantage.

Rado Vidosic’s side highlighted the importance of taking chances when they hit the front deep into first-half stoppage time.

A ball lofted into the box was nodded back by Hannah Wilkinson who chested the ball down for Rhianna Pollicina. The 25-year-old hit a lovely finish into the net for her fifth goal of the season.

The game was ultimately decided in a sixty-second spell around the hour mark. Hana Lowry fed a dangerous corner into the mix from the right for Perth which led to a playground-style scramble in and around the six-yard box which City finally dealt with for a goal kick.

Melissa Barbieri hit the kick long and Green's back header fell was jumped on gleefully by Holly McNamara to advance to a one-on-one with Perth keeper Courtney Newbon and calmly slot home into the bottom corner.

City wrapped matters up with two goals at the death. First, former Perth player Leticia McKenna playing a long ball into the stride of McNamara. Newbon came out but McNamara coolly lofted the ball over her and into the net.

It’s 4-0 at the death when a long, low ball through split the Perth defence and found Wilkinson. Once more Newbon was forced to come way out of her goal and once more, City profit, as the Football Fern took a touch away from the Perth keeper to score.