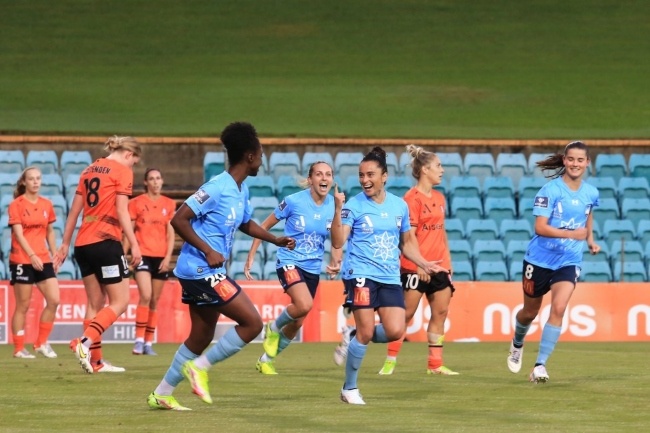 Round 10 saw all ten teams in action. With record-breaking Sydney FC comfortably clear at the top, both Melbourne clubs and Adelaide United claimed important wins in the Finals race.

The South Australian side hit three goals for the second week running as they look to be easing towards a maiden Finals appearance.

Adelaide took the lead with an impressive team move brought the ball from defence to attack and ended with Paige Hayward finding Fiona Worts to fire home a left-foot volley with 24 minutes played.

Despite being largely in control, it took the home side until the 74thminute to double their advantage and it was Worts again. Chelsie Dawber got a shot in which Jets keeper Claire Coelho couldn’t hold and Worts made it 2-0.

It was Dawber who wrapped matters up when she was clipped in the box and stepped up to dispatch the penalty.

Winless Canberra made a strong start and imposed a fast pace passing game through the midfield.

They took the lead with six minutes played when Perth captain Tash Rigby pulled back Allira Toby both outside and in the box. Referee Isabella Blaess initially looked to have waved play on.

However, after what seemed to be an inordinately long period spent looking over at her nearest placed assistant, she finally and correctly pointed to the spot. Grace Maher dispatched a perfect penalty into the right-hand corner.

Perth struggled to find their in-form striker Cyera Hintzen for the majority of the first half. However, she later showed what she can do with good service.

Canberra goalkeeper Keeley Richards, who was showing signs of a knee injury, rolled out a pass that was nodded back to Perth's Hana Lowry on the right of the box.

The teenager played an intelligent ball between Haran and Maher to Hintzen on the edge of the box. She took a touch, turned, and fired a shot into the left-hand side of the goal.

Despite Canberra starting the second half stronger, it was Perth who went ahead with 25 minutes to go. Mikayla Vidmar, under pressure, conceded a corner. Lowry bent the flag-kick in from the right. Canberra failed to clear and Liz Anton smashed home.

It was another defensive disaster six minutes later which led to Glory’s third goal. Sarah Cain, on as a sub had a pass deflected into the path of Hintzen by Maher.

In trying to clear the danger, Haran could only hit the ball against Vidmar which allowed it to roll back towards Hintzen.

The American ran across the box and turned a shot back into the net past a despairing Richards for her fourth goal in four games this season.

Canberra hit back with 12 minutes remaining on the clock. Ash Sykes earned a corner after pressuring Rigby and Anton.

The set-piece came in from Margot Robinne to the back post for Chelsee Washington to time her run into the back post. Rising above two defenders, she nodded home.

Canberra ratcheted up the pressure in the closing stages. There were six minutes remaining when Kim Carroll was adjudged to have fouled Sykes.

Maher stepped up around thirty yards out and lifted the ball in towards the back post. Michelle Heyman headed the ball to Allyson Haran who nodded it across the box for Lauren Keir to lift the ball into the net.

The earlier than expected return of Holly McNamara from international duty inspired City to a hard-fought win over the Wanderers at AAMI Park.

McNamara combined with Rhianna Pollicina to create the opening goal. The resulting cross into the box towards Hannah Wilkinson eventually fell to Pollicina to dispatch into the net.

It was 2-0 just before the break when McNamara rifled a shot home past Langman.

Wanderers got an early goal back just two minutes into the second half when Erica Halloway’s cross was deflected into the path of Bryleeh Henry who found Teigan Collister to score.

It was as close as Wanderers could get.

Sydney’s relentless march towards the title continued with another victory and record-breaking eighth clean sheet in a row.

The Sky Blues went ahead with just five minutes on the clock when Charlize Rule’s cross eluded the Roar defence and Chilean magician Cote Rojas fired home a half-volley.

The Queenslanders worked hard to get back into the game with Katrina Gorry particularly prominent. However, they couldn’t breach the competition’s meanest defence.

Sydney confirmed their eighth win in nine games this season when Rojas hooked the ball over her head, Roar keeper Mia Bailey managed to get a hand to it but Rule responded the fastest to force the ball home.

Another promising performance from Phoenix, but it was the same old story as they fell to their ninth loss of the season.

Half chances came and went, but after a spell of two Victory goals in 10 first-half minutes, there was only going to be one winner.

Alana Murphy put Victory ahead just before the quarter-hour mark when Alex Chidiac found the 16-year-old whose cross was misdirected into the goal by Phoenix keeper Lily Alfeld.

The result was confirmed with 26 minutes on the clock. Kate Taylor’s pass was intercepted by Chidiac who found Barbieri. The favour was returned for Tiff Eliadis to sweep home her first-ever A-League Women’s goal.