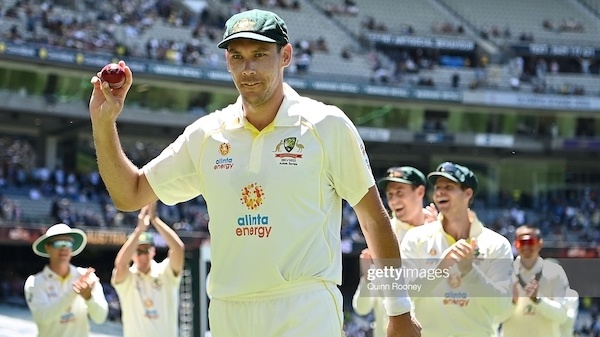 A debut for the ages: Boland brilliant at home in Boxing Day test

Scott Boland, on debut in the baggy green, took 6/7 in four overs and was recognised with the Mullagh Medal for his player of the match performance in the Boxing Day test.

A debut for the ages: Boland brilliant at home in Boxing Day test

Scott Boland, on debut in the baggy green, took 6/7 in four overs and was recognised with the Mullagh Medal for his player of the match performance in the Boxing Day test.

When Scott Boland was handed his baggy green and test debut on Boxing Day morning no one could have foreseen how the next three days of play would go.

On test debut for Australia, Boland finished 6/7 off just four overs in the second innings, incredible figures that saw him named player of the match, as the side went on to win by an innings and 14 runs on the third day of the Melbourne test match.

The performance earned him the Mullagh Medal, a new medal awarded to the player of the match in the annual Boxing Day Test, in recognition of Indigenous Australian cricketer Johnny Mullagh.

His wickets in the final two sessions of play in Melbourne saw him become the second recipient of the medal after Ajinkya Rahane won it in 2020.

“Yeah it’s (the Mullagh Medal) something that I’m very proud of now and I’ve had some messages from some mates and guys like Dan Christian, D’Arcy Short who are saying congratulations and told me to enjoy the moment.

“So it’s really nice to get messages off those guys who are on the tour with us three years ago, when we went to England.”

That trip Boland speaks of was back in 2018 when, after learning more about his family history and Indigenous history, he toured England in the Aboriginal XI to celebrate the 150th anniversary of the 1868 Aboriginal team that travelled to England.

“Growing up, we didn’t actually know we were Aboriginal, so only found that out maybe five, six, seven years ago…

“Hopefully this can be a moment, together with the Big Bash and D’Arcy Short and Ash Gardner and Dan Christian, hopefully that can be a sort of springboard for young Aboriginal to get involved in the game of cricket.”

Getting the baggy green

At the start of the summer, Boland’s place in the Test XI seemed a long shot. Though with Covid-related dramas and injuries, there was always a chance the Victorian would get the call-up.

Hauls of three, four and five wickets for Victoria early in the Sheffield Shield season put Boland’s name back in the conversation for a test squad spot and saw him named in the Australia A squad.

He took a wicket in the tour match against the England Lions at the start of December and was always ready, training and playing with the Hobart Hurricanes BBL side.

Despite roles in The Australian T20 and ODI side back it 2016, it had been a long wait for Boland to make the Test side, but his suitability to his home MCG deck made it the perfect opportunity to debut the 32-year-old.

“There was definitely a time there where I thought playing for Australia was gone and probably a couple of years ago, when we had a really strong attack in Victoria with Peter Siddle, James Pattinson, Chris Tremain, so I was sort of fighting for a fast bowling spot there.

“I’ve done a huge amount of work at the MCG so when you are so familiar with a ground, one: it makes me feel more comfortable debuting here, and then two: you know what lengths to bowl here, you know what the bounce is like.

“As a Victorian, going to the ground like the Gabba, it is a bit different because you have to find your length and adjust your length. But here, I feel like I’ve found my natural length here now and it’s been working well the last couple of years.”

It was only right that Boland made his debut, took his first wicket, made his first runs and collected a five wicket haul all on the MCG deck, and it was even better with a huge crowd to keep pumping him up.

Fielding in front of Bay 13, the fast bowler would have felt the chants of the Australian crowd pounding through his chest and said it was the most supportive crowd he's played in front of - a couple of wickets is the quickest way to get 70,000+ people on your side.

“I’ve never played in front of a crowd that’s been so supportive of me, like that,” Boland reflected post-match.

“I’ve played in a couple of games in the Big Bash, where the crowds have been bigger here at the MCG, but I’ve never had a crowd behind me like that.

“I tried to soak it up when I was down at fine leg there, but yeah really enjoyed it. It felt like they were sort of pushing me when I was running in to bowl.”

Not only did Boland take seven wickets for the match, one of which was caught and bowled, but he also took two catches to remove Jos Buttler and Ollie Robinson in the first innings.

Cricket 22 it's like being run out on 99: Almost there but not quite

The benefits of being a Victorian

The likes of David Saker, Andrew McDonald and Mick Lewis have been integral to Boland’s development over the years, and one, in particular, played an important role in the Victorian having confidence to do his thing out on the MCG.

“Me and Mick (Lewis) have been together for 10 years, he’s been my bowling coach. He knows my game so well, he knows when I’m a little bit off and it takes a little word from him at training or during a game to get back to where I need to be,” Boland appreciated after the game.

“And then Andrew McDonald through this game has been so good, he picked up that I was sort of tentative in my first two spells and he just wanted me to up my run up speed, which I know is key for me when I’m bowling well.

“And then from a playing perspective, I’ve had the luxury of being able to bowl with guys like John Hastings, Peter Siddle, James Pattinson, Clint McKay, like the list goes on.

“I’ve been so lucky to have such great fast bowlers around me when I was younger to help me learn the game.

“Now in Victoria we’ve got a bit of a younger attack that I can sort of try and play that role and pass on my knowledge to guys like Mitch Perry and Will Sutherland and the young crew we’ve got coming through there.”

Speaking of McDonald and his current role with the Australian team, Boland was especially grateful for his guidance throughout the week as he navigated his test debut in front of a bumper MCG crowd.

“Since I found out on Christmas Eve that I was playing, I’ve been really nervous,” he said.

“And even coming off at lunch on Day 1, I sort of felt like that was hard work… felt like I wasn’t breathing at all out there.

“I was just so nervous the whole time, but to be able to speak to him (Andrew McDonald) at lunch and for him to give me really simple and clear instructions on what he thinks I need to do to do well, makes my job a bit easier. Knowing that one: Ronnie’s (McDonald’s) got my back, and two: that he knows my bowling so well.”

With Josh Hazlewood a strong chance to return from injury to the XI, Boland, despite his remarkable debut, may be an unlucky omission from the Australian side.

Although, Covid may once again have something to say about Australia’s XI.