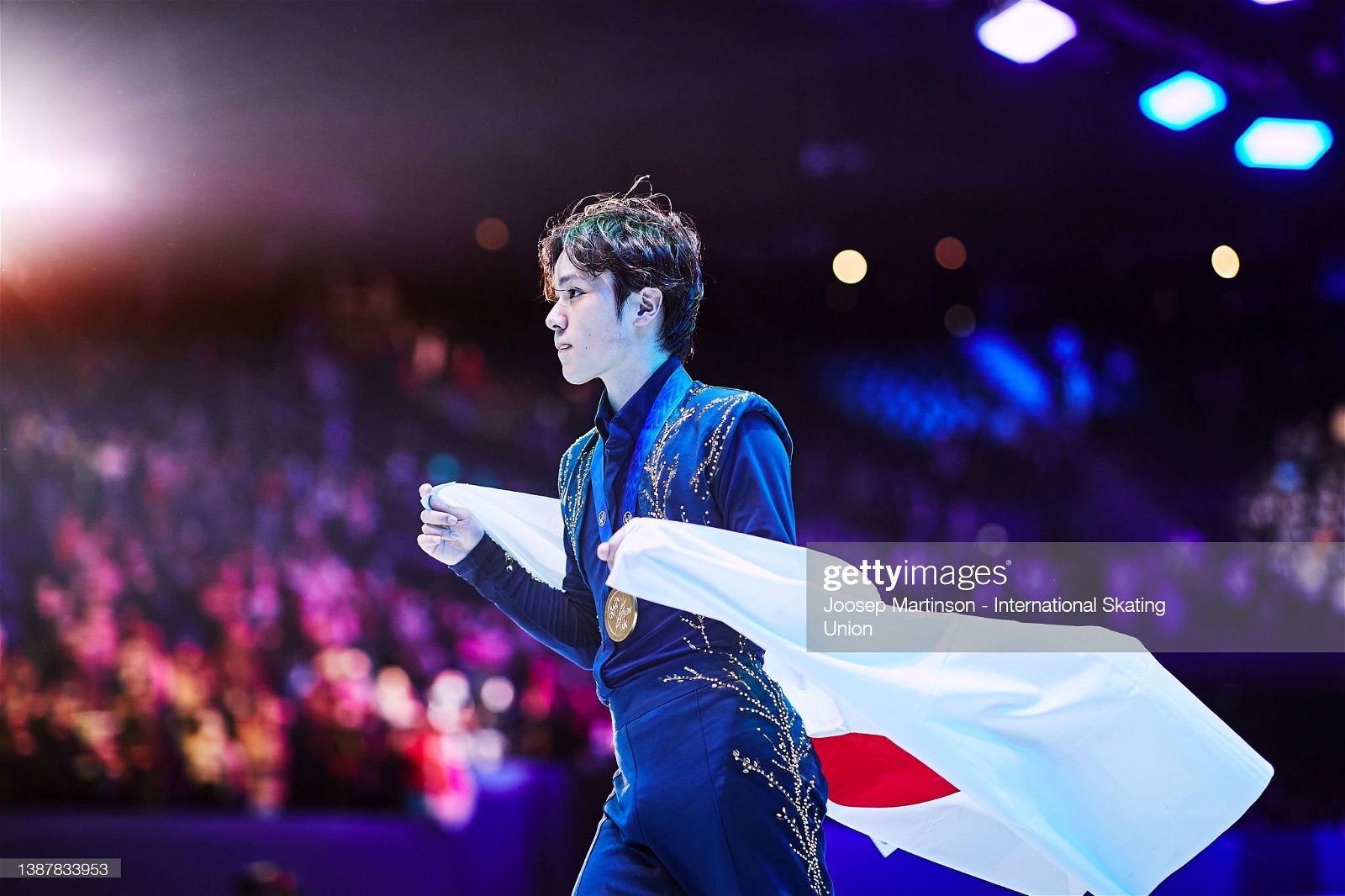 The World Figure Skating Championships went to script in some ways and in others was exactly as wild and messy as figure skating competitions have grown to become since the beginning of the quad revolution.

The Japan Skating Federation reigned supreme winning two gold and two silver medals across three disciplines including its first-ever pairs medal, meanwhile the United States skaters were close behind winning one gold, one silver and three bronze across all four disciplines.

Without the Russian Women's Singles skaters, the Women's event was described by fans as a refreshing change of pace with the scoring seeming more reasonable and the skaters with incredible footwork receiving scores worthy of their technique beyond their jumps.

Olympic bronze medallist Kaori Sakamoto became the second non-Russian woman to score above 80 points in the Short Program. Sakamoto's had the momentum behind her all season with scores steadily increasing with consistently clean programs that rivalled opponents that were jumping triple axels. However, five points clear from her closest rivals it was going to take spectacular performances to beat her in the Free Skate.

Belgium's Loena Hendrickx has continued to go from strength to strength powering through an injury to perform a clean Short Program scoring 75.00. It was redemption for a less than ideal Olympics where she finished in eighth and proved Hendrickx has come into her own as a skater in her early 20s and could continue to succeed early next season.

American Mariah Bell sat in third following the Short Program, scoring 72.55, a fairly reasonable score considering her clean technical elements and lovely skating skills, however, Bell was the beneficiary of a few other skaters being underscored, namely Korea's Young You who received harsher technical calls on elements weren't called for other skaters.

Australian Kailani Craine earned her Olympic redemption in the short program, receiving a score of 56.64 to sit in 22nd after the short, missing the triple loop triple loop combination by doubling the second jump. However, after not qualifying for the Free Skate at the Olympics it was a massive achievement for the six-time National Champion.

In the Free Skate, Sakamoto shined again becoming the second consecutive Olympic bronze medalist in the Ladies event to win the World Championship in the same year. The 21-year-old was near flawless, only receiving an unclear edge call on her triple lutz and received a new personal best of 155.77 for a total score of 236.09.

Almost 20 points behind Sakamoto was Hendrickx who had a few issues, namely underrotating the second part of her opening jump, a triple lutz triple toeloop. But she rallied putting on a great performance to secure the silver medal, Hendrickx's first medal at an ISU Championship event and a rare second half of the season medal.

American youngster Alyssa Liu delivered in her Free Skate, scoring 139.28. The 16-year-old had performed well in the Short, sitting in fifth but with a triple axel in the Free, despite a few rotation calls she had a high enough base value to climb up the rankings and finish with a total score of 211.19, becoming the first American woman since 2016 to win a World Championship medal.

Craine was back again in the Free Skate scoring 105.11 for a total score of 161.75, six points off her personal best receiving multiple 'q's and an unclear edge call on her triple lutz.

With no Nathan Chen and no Yuzuru Hanyu, the battle for the world title still seemed to be between the Japanese and the Americans but with faces that have never won a world title. Shoma Uno and Yuma Kagiyama starred for Japan while Vincent Zhou and Ilia Malinin continued to prove that the American system gets results.

However, there were a few surprises thrown in, especially by Japan's and the United States' third entries.

Shoma Uno was just shy of cracking 110 in the Short Program, nailing his technical elements, especially his quad toeloop triple toeloop combination and his final two elements, the step sequence and his change foot combination spin. Ultimately he scored 109.63 a massive new personal best after struggling in the short program for the past four years.

Olympic silver medallist Yuma Kagiyama showed just how good he's been since his senior debut, looking incredible early in the program and only making a small mistake on the triple axel, but it didn't cost him too many points receiving a total score of 105.69.

The first big surprise came from Kazuki Tomono who helped Japan sweep the Short Program small medals scoring an incredible 101.12, his first 100+ score which was an even more amazing feat considering Tomono had never scored above 90 prior to the 2021/22 season.

Some notable mentions was of course Malinin who broke the 100 point barrier at his first major international senior competition, as well as the 12 skaters who received career personal bests in what was a refreshingly clean Short Program for the men.

The Free Skate on the other hand was not so clean.

Uno was best in show once again, scoring a 202.85 for a combined score of 312.48, performing a very technical program with five quads including two backloaded quad jumps. It's been a long journey for Uno to get back to the top and his coach Stephane Lambiel warned his student that it only gets harder from here.

Kagiyama had a couple of issues in his Free Skate, including a downgraded quad loop and popping his final jump, a triple axel into a single axel. The 18-year-old scored 191.91 for the Free Skate for a total score of 297.60 to win his second consecutive World silver medal.

Camden Pulkinen had the competition of his career, and performed an incredibly clean Free Skate to score 182.19 to win a small medal for the free skate. It wasn't enough for him to land on the overall podium, earning a combined score of 271.69 to finish fifth overall.

It was Vincent Zhou who won bronze, his second bronze medal at a World Championship and redemption from the unfortunate circumstances in Beijing that saw him withdraw from the individual event after testing positive for COVID-19.

The program was by no means flawless receiving two underrotation calls and a 'q' on his quadruple toeloop and an off landing on the triple axel early in the program. However, it was good enough to secure bronze scoring 181.54 for a total score of 277.38.

Both Tomono and Malinin had less than ideal Free Skates, in particular, Malinin who had the wind knocked out of his sails after a particularly hard fall on his quad salchow.

There were new faces on the podium in the pairs at this year's World Championships with the United States' Alexa Knierim and Brandon Fraizer claiming the country's first Worlds gold in the discipline since 1979, and Riku Miura and Ryuichi Kihara earning Japan's first-ever World Championship medal.

The top five from Beijing 2022 were nowhere to be seen, with neither China or Russia competing at this year's World Championships and it left the door wide open for a first time World Champion, with no team in the field having won a Worlds medal aside from Vanessa James and Eric Radford, who won their respective medals with different partners.

After the Short Program Knierim and Fraizer sat on top, performing a relatively clean program only missing a level on their opening move, a triple twist. They scored a career-best of 76.88 over 1.5 points ahead of their best score at the Beijing 2022 Olympics.

Sitting in second after the Short was Ashley Cain-Gribble and Timothy LeDuc, scoring a 75.85, their only major error was on their side by side triple loop, receiving a negative grade of execution score due to Cain-Gribble putting a hand down.

Miura and Kihara rounded out the top three after the short with a less than ideal program, struggling on one of their more solid elements the throw triple lutz which had a hand down and a step out, going in with too much speed and having to perform the throw early. Ultimately they scored 71.58, solidly in third with the next closest team over four points behind them.

Unfortunately, the celebration of the new World Champions was subdued due to a nasty fall from Ashley Cain-Gribble who hit her head on a fall and had to be removed from the ice on a stretcher and taken to hospital. The 26-year-old has since posted on her Instagram giving an update on her condition, thankfully able to leave the hospital after suffering a concussion.

Knierim and Fraizer once again were very clean, losing a few levels but nailing their technical elements, especially their throw jumps. They earned a Free Skate score of 144.21, another career-best and the first time the pair had scored over 140 internationally for a combined score of 221.09 to win gold.

The most experienced skaters in the field but still a relatively new team, Vanessa James and Eric Radford had one of their best performances since teaming up, scoring 130.78 in their free skate, which earned them a silver small medal for the Free. However, following their rough Short Program, where they sat in fifth they didn't gain enough of a leg up to claim the silver medal and instead had to settle for bronze with a total score of 197.32.

Meanwhile, Miura and Kihara again had a number of issues, including a fall on their throw triple loop but did enough difficult content-wise to score 127.97 to finish third in the free skate, for a combined score of 199.55 to win the silver medal, Japan's first-ever medal at a World Championships in pairs.

Who else but Papadakis and Cizeron

If there was a discipline that had a script that wasn't going to deviate from it was the Ice Dance, heading into the event Gabriella Papadakis and Guillaume Cizeron headed into the event as the outright favourites, Olympic gold medallists wanting to claim Worlds gold on home ice and they did exactly that.

There was very little to fault in their Rhythm Dance with the French duo breaking another World Record to sit in first, scoring 92.73, receiving 24 10.00s for different components scores from the nine judges to get a near-perfect 39.57 out of 40 for personal components scores.

The United States sat in second and third following the Rhythm Dance with Madison Hubbell and Zachary Donohue receiving a career-best score of 89.72 in what is set to be the final competition of their careers.

Not far behind was Madison Chock and Evan Bates who scored 87.51, another career-best for the pair creating a comfortable buffer between the fourth and fifth place teams, Charlène Guignard and Marco Fabbri (84.22) and Piper Gilles and Paul Poirier (80.79).

Australian's Holly Harris and Jason Chan became the country's first ice dance team to make the free skate in a decade, qualifying in 19th with a score of 64.91 just over half a point shy of their career-best.

In the Free Dance, the French shined again, breaking two more world records in the process, beating the Free Dance world record for the first time since 2019 with a score of 137.09, receiving 34 10.00s for components from the judges, for a combined total of 229.82, breaking the previous world record by 2.84 points and claiming their fifth world title.

Hubbell and Donohue flattened their previous bests scoring 132.67 cracking 130 for just the second time in their career and finishing with a total score of 222.39. If this is to be their last competition they certainly went out on a high note.

Meanwhile, Chock and Bates were the lone team on the podium to not receive a new career-best for all three scores, however, they were able to conquer two of three, their Free Dance score of 129.32 was a point short of a new personal best but combined with their stellar Rhythm Dance they were able to receive a new personal best of 216.83 to win bronze.

Scoring 95.01 in the Free Dance for a combined score of 159.92 there is still a long way to go to start cracking the top 10 in the world but as the field gets more competitive at home the possibilities for Australia to have an Ice Dance team that scores 70+ regularly becomes more possible.