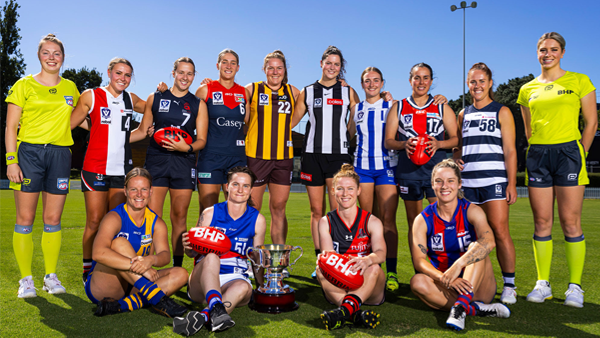 2022 VFLW season about to commence as Round One fixture confirmed

The times and locations for each of the six matches that make up Round One of the 2022 VFLW season have been locked, with the competition beginning this weekend.

2022 VFLW season about to commence as Round One fixture confirmed

The times and locations for each of the six matches that make up Round One of the 2022 VFLW season have been locked, with the competition beginning this weekend.

The AFL has announced and confirmed the times and locations of the opening round of the 2022 VFLW season, commencing this weekend.

After the premature cancellation of the 2021 VFLW Grand Final following multiple attempts to postpone the decider between Collingwood and Geelong, with ultimately no premier awarded, in three days time, on Saturday, February 12, the 2022 season will begin as the league and clubs look to kick-start a new campaign.

In Round One, six matches will be played across two days with the Casey Demons hosting Port Melbourne at Casey Fields to start proceedings on the 2022 VFLW season.

The other fixtures on the first day of the 2022 VFLW season sees standalone clubs Darebin and Williamstown battle at La Trobe University, Essendon at home at Tullamarine against the Western Bulldogs, and Geelong and Carlton facing off in Waurn Ponds.

On Sunday, February 13, North Melbourne and Hawthorn meet at Arden St, while Collingwood gets its season underway a Victoria Park against the Southern Saints, to round out Round One.

Last week the AFL launched the 2022 VFLW season, with AFL General Manager Women's Football, Nicole Livingstone declaring this season would be an important on, given the impacts of women's football in the past couple of years.

"The rebel VFLW competition provides some of the best players in Victoria and the country with the opportunity to play at the highest standard of state league football," Livingstone said at the launch.

"2022 is such an important year for the game in Victoria after what the state has been through in the past two years, so we are looking forward to a full season of great football and for the VFLW to continue to flourish. The competition has made great headway but we can't take for granted the importance of rebounding strongly this year.

"The recently releasedAFL Women's Football Visionreflects our absolute commitment to building and progressing Australian Football at every level of the game for women and girls.

"VFLW is a significant part of that commitment and we want the competition to be as strong as it can be, while providing opportunities for hundreds of players to play our great game at a very high level."

Jennie Loughnan, AFL State League Competitions Manager stated that the clubs, and the league overall are preparing for a successful year as it continues to be a driving force in the pathway of women playing football.

"After a huge amount of planning and preparation, all clubs are ready for a big year," she said at the launch.

"The past two years have been very difficult for many with so much disruption, but the resilience and determination we've seen from clubs, players, umpires, partners and all stakeholders involved in the rebel VFLW competition shows how much it means to people. There is a lot of excitement about the year ahead.

"The competition is an important part of the pathway system, with many players progressing from the NAB League and aspiring to reach the elite AFLW level. Having VFLW clubs aligned to AFLW programs ensures a strong connection to the elite level.

"We thank all stakeholders, including the clubs and the players, for their cooperation as we've planned for the season and developed the fixture. We may face the need to adapt our fixture because of COVID forcing changes at AFLW level. We will continue to work closely with clubs and we are absolutely committed to completing a full season in 2022."

WHAT YOU MISSED IN ROUND ONE OF SANFLW 2022

The 2022 VFL season will comprise of a 14-round home-and-away fixture before a six-team finals series across four weeks, with the Grand Final scheduled to be contested on the weekend of July 2.

Due to the evolving effects of COVID-19, and closely-linked relations between many of the VFLW clubs with AFLW counterparts, the 2022 VFLW fixture will be released week-by-week, after learning of the AFLW fixture and any resulting changes that could impact the VFLW.

In a win for fans, entry will be free for every match throughout the 2022 VFLW season, as well as, for the first time, be live streamed, with more details to follow in the lead-up to Round One.

2022 VFLW ROUND ONE FIXTURE

The full 2022 VFLW fixture can be viewedhere.